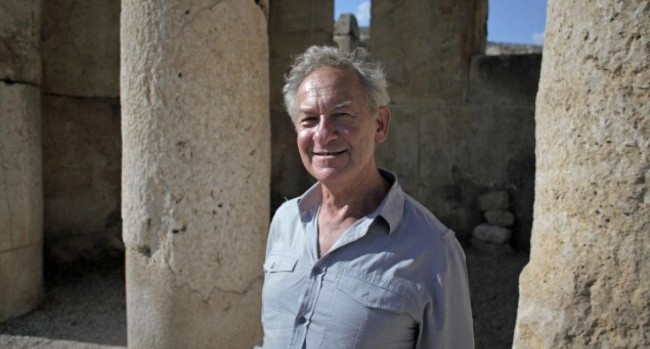 As most readers will know, the British historian Simon Schama is one of the most acclaimed, visible, and popular contemporary historians. Before coming to the United States, he taught at Cambridge and Oxford, and since has held chaired professorships at Harvard and Columbia. He has written sixteen books, specializing on the French Revolution, Dutch history, British history, American history—and also on baseball and art; for awhile he was even the art critic for the New Yorker.

As well, Schama has written and starred in eleven popular TV documentaries on these subjects, on the BBC and PBS. This astonishing record leaves no doubt that Schama is a prolific and brilliant political and cultural historian, and a man of great personal charm and articulateness. He is also a man of vigorously stated strong emotions and strong opinions—that’s part of his charm, but the downside of it is that he can be something of a popularizer and an oversimplifier of complex and controversial issues.

And on contemporary Israel, Schama is something of a whitewasher.  I refer to the Story of the Jews, his current five part PBS documentary and soon to be a two volume book, in which his emotionalism, his strong but not necessarily persuasive beliefs and  opinions, and his tendency to oversimplify or, worse, ignore inconvenient facts, has created a serious problem–at least in the last program, where he takes on Zionism, the establishment of Israel, and the continuing Israeli-Palestinian conflict.* (I don’t know enough about the history of the Jews from the pre-Christian era until the 20th century to know whether his ideological and political preferences distort his historical story telling, although I have the strong impression that modern Biblical scholars and archaeologists will challenge some of his conventional history.)

The fifth and last program begins with a discussion of the origins of Zionism, and makes the case that the history of the persecution of the Jews justified the creation of the state of Israel, an argument I agree with–but not with Schama’s failure to even mention the problem created by creating that state in a land already the homeland of another people.

After that, the omissions and distortions steadily worsen, and while somewhat balanced by criticism of Israel, the total effect of the program is to perpetuate most of the myths of the Israeli-Palestinian conflict that serious historians have long discarded.

1948: After noting the UN partition resolution of 1947 that created a Jewish state in Palestine, the program shows a long except from David Ben-Gurion’s speech of May 14, in which he announced that “the Jews have come home from their exile.” Ben-Gurion, of course, does not mention that for the last two thousand years Palestine had been the homeland of the indigenous Arabs—and neither does Schama.

Schama then continues: “the Arabs rejected the UN plan, as they had rejected every previous partition plan, and sent armies in.” There is no explanation of why the Palestinians might have considered it to be unfair and unacceptable that powerful outside forces had dictated that their two-thousand year old homeland was to be divided up with the Jews.

Nor does Schama the historian mention the established fact that Ben-Gurion and the Zionist leaders “accepted” partition only as a tactical first step, to be jettisoned as soon as they were strong enough to go well beyond the boundaries of the partition plan–by whatever means necessary.

Concluding this discussion, Schama says that after the 1948 war “an armistice agreement allowed Israel to expand its boundaries” (emphasis added), language that seems designed to obscure the fact that the “agreement” simply reflected force majeure, or the fact of the Israeli conquest.

The Nakba: Schama does mention the Nakba, which he describes as “the displacement, sometimes violently, of hundreds of thousands of Palestinians from towns and villages,” some of whom “fled in fear,” some of whom went into exile because they were told to do so by Arab leaders, and some who “were driven out by force and terror.”

Even this apparently fair and forthright statement can be challenged as insufficient and partly misleading, but the real problem is what comes next, which is a substantially longer section on the departure of some 700,000 Jews from Muslim countries in the ensuing years.

Since this section is obviously intended to provide a moral balance to the Nakba, you know that it will begin with a “But.” And so it does: “But there are other memories and other catastrophes,” as the Jews who “had lived for centuries” in the Muslim countries of the Middle East “discovered suddenly that their home was no longer their home.”

Note that there is no claim that the 1950s “exodus”—his word—of Middle Eastern Jews was primarily driven by violence or government expulsion. Nor is any note taken of the fact that Arab outrage at the Nakba might have had something to do with precipitating whatever anti-Semitism and violence did occur.

In any case, while it is undoubtedly true that many Jews left Arab countries because of outbreaks of anti-Semitism and violence, many others went to Israel because they preferred to live in a Jewish state. Indeed, many of these Jews–particularly from Iraq—left because Zionist and Israeli organizations worked hard to induce them to come to Israel.

The 1967 War: Schama’s portrayal here is pure Hasbara, long discredited. Accompanied by an ominous map with arrows depicting armies from Syria, Jordan, and Egypt converging on Israel from all directions, the Arab attack is portrayed as massive, unprovoked, and aimed at Israel’s very existence—all myths long discredited by serious historians. In fact Israel provoked the Syrian attack in a number of ways and initiated the attack on Egypt even though Nasser did not intend to start a war. Some years later Menachem Begin, no less, admitted that the 1967 War was not a necessary war forced on Israel but a “war of choice,” started by Israel even though its survival was not at stake.

The Separation Wall: Schama is disturbed by the Wall, but he initially portrays it solely as a response to Palestinian terror, rather than as an implementation of the overall Israeli strategy of incorporating within its new boundaries all the land it conquered in 1967. To be sure, Schama then does mention that the Wall extends deep into the West Bank in order to include leading Jewish settlements in the heart of the occupied territories, and he even concedes that it has “made life for the Palestinians a daily ordeal;” even so, the weight of his presentation is to portray the Wall as an anti-terrorism measure. Indeed, he concludes that because he is not an Israeli, he doesn’t have “the moral right to condemn” the Wall, because before it was built Palestinians were killing hundreds of Israelis, but since then very few.

Even more fundamentally, nowhere does Schama raise the question of whether Palestinian terrorism is a response to forty-seven years of Israeli occupation, repression, economic warfare, assassinations, daily hardships and humiliations, outright murders and, indeed, Jewish private and state terrorism directed against the Palestinians. His failure to do so is not merely revealing, it is disgraceful.

One has to assume that Schama the historian knows better–or maybe he doesn’t, I don’t know which is worse.  In any case, his failure to use his charm, his charisma, his erudition, his way with words, his unassailable standing, his vast popularity, and the golden opportunity to use his national television platform to educate the American public–above all, us Jews–about the realities of the Israeli-Palestinian conflict is unforgivable.

*Even before the Story of the Jews, it was apparent that Schama is something of an apologist for Israel. According to Wikipedia: “In 2006 on the BBC, Schama debated the morality of Israel’s actions in the Israel-Lebanon War. He characterised Israel’s bombing of Lebanese city centres as unhelpful in Israel’s attempt to “get rid of” Hezbollah. With regard to the bombing he said: “Of course the spectacle and suffering makes us grieve. Who wouldn’t grieve? But it’s not enough to do that. We’ve got to understand. You’ve even got to understand Israel’s point of view.”