Sectarianism: The ‘Elephant in the Room’ in Syria 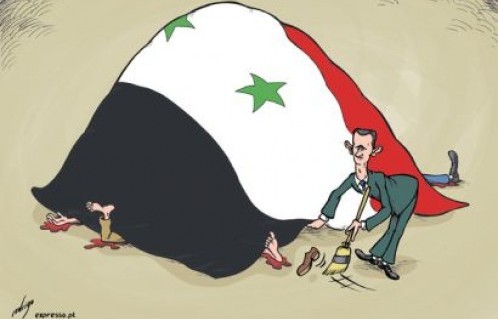 Sectarianism has become something of an elephant in the room. Anyone who mentions it is battered down.

Syria is the exception. Syria is different, we are told. No it’s not. The hatred was there long before this war started, and it’ll be there long after it’s finished.

Ignoring a problem is never a good way to deal with it, as Homs shows. Very interesting last paragraph…

Key Syrian City Takes On the Tone of a Civil War

This article was reported by a correspondent for The New York Times in Homs, Syria, and written by Anthony Shadid in Beirut, Lebanon.

The semblance of a civil war has erupted in Homs, Syria’s third-largest city, where armed protesters now call themselves revolutionaries, gun battles erupt as often as every few hours, security forces and opponents carry out assassinations, and rifles costing as much as $2,000 apiece flood the city from abroad, residents say.

Since the start of the uprising in March, Homs has stood as one of Syria’s most contested cities, its youth among the best organized and most tenacious. But across the political spectrum, residents speak of a decisive shift in past weeks, as a largely peaceful uprising gives way to a grinding struggle that has made Homs violent, fearful and determined.

Analysts caution that the strife in Homs is still specific to the city itself, and many in the opposition reject violence because they fear it will serve as a pretext for the government’s brutal crackdown.

But in the targeted killings, the rival security checkpoints and the hardening of sectarian sentiments, the city offers a dark vision that could foretell the future of Syria’s uprising as both the government and the opposition ready themselves for a protracted struggle over the endurance of a four-decade dictatorship. …

Perhaps the most dramatic facet of the struggle is a series of assassinations this past week that have left nearly a dozen professors, doctors and informers dead in a paroxysm of violence that echoes the sectarian vendettas still besetting Iraq. Unlike the uprising’s early days, when the government exercised a near monopoly on violence, fear is beginning to spread in the other direction, as insurgents kill government supporters and informers, residents say.