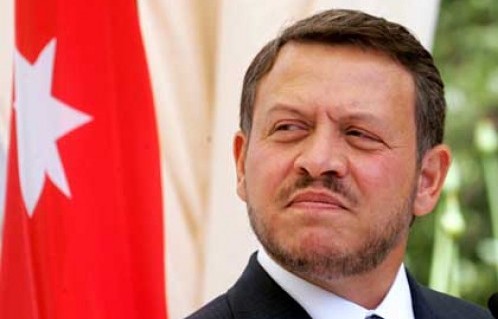 Since the advent of the Arab Awakening, and the subsequent spotlight hovering over Jordan, one of the most frequent questions I get asked by foreigners interested in what’s going on here is the taboo of criticizing HM King Abdullah. I’ve found this question to be quite curious as it indicates that even non-Jordanians who are observers of local politics have perceived a shift in tone. It may go without saying that one of the advantages that has presented itself amidst this year’s regional upheaval has been the breaking of taboos and red lines. In Jordan, the monarchy has always been the ultimate red line. I’ve actually seen people get away with insulting God in this fairly conservative country, but avoid even a shred of criticism of the King.

I also view this question with some irony, as the King has expressed on more than one occasion that he himself is not above criticism. Whether people believe his proclamations to be genuine or not is besides the point. For when it comes to crossing red lines, it’s not the King that makes the phone calls, or comes knocking on anyone’s door. There is an entire system that does not allow for it, and this is generally what keeps the red lines bleeding red.

And thus, it is telling that while other taboos have been broken this year (who would’ve thought we’d be talking about a constitutional monarchy and elected governments a year ago?) the taboo that is the monarchy has been slow to thaw. Moreover, it some times appears that the same system, which maintained the taboo in the first place, has been the one that has allowed it to be broken slowly. One theory might suggest that direct critiques of the King have originated from the more “east banker” Jordanian tribes, which is long believed to be the monarchy’s bedrock of support in a country that is still struggling with identity and loyalty issues. To charge a Jordanian tribesman with “lese majeste” (which comes with a rarely enforced jail sentence) at a time like this would, in all probability, generate a very negative reaction, a reaction the state is probably not willing to risk. One can easily look to how the more tribal protesters have been treated by the security apparatus, the government, and even the media, as opposed to, say, the more Amman-based protesters. Both groups may share common demands for reform, and the tribal group may even be sharper in its critique and assault on the state and its various institutions, but this latter group will unlikely witness any adverse reactions or opposition from that state.

Nearly a year before the Arab Awakening, military veterans published a petition that was, by local standards, groundbreaking. Not only did they warn the King about the people he chooses to surround himself with (a more common critique these days) but they also alluded to the Queen’s involvement in appointing mostly “neo-liberal, elite, Palestinians” to key posts. Suffice to say, the petition made news. The fact that they were not only military veterans and retired servicemen representing tens of thousands, but also heavily tribal in origin, was enough to lend it credibility.

Fast forward to today and the critique seems to have evolved to new levels of confidence – for lack of a better word. In February, HM Queen Rania was the target of criticism from local tribes who demanded the King give back state lands given to her family. Such sharp critique may stem from the tone of the military veteran’s petition, which essentially targets those closest to the King, such as the Queen or his advisers, rather than go after the King directly. Some recent protests, such as those held in Tafileh, have seen public chants that essentially “warn” the King of what has happened to other Arab leaders in recent months, but fall just short of doing so directly.

A recent piece in The Economist stated the following:

Recently it has been plain that he can no longer depend so comfortably on the loyalty of the East Bankers, who still dominate the security forces and civil service. He relies ever more heavily on the army and the Mukhabarat, the intelligence service, to maintain his grip….

…Most Jordanians, including those inspired by the Arab awakening elsewhere, want to keep the monarchy, preferring to reform the system rather than overthrow it. But across the spectrum there is a growing rumble of dissatisfaction with the king. Invidiously nostalgic comparisons are made with his father, King Hussein, who reigned from 1952-1999. “No one knows who’s running the show”, says a former bigwig at court. “There’s a disconnect between government action and the royal court,” says a former senior minister. “The guy is drifting,” says a prominent local journalist. As the king seeks to appease his detractors, the government looks stuck. [source

One video that has garnered some online attention has come to personify the kind of criticism the King is recieving directly by those belonging to Jordanian tribes, and in this case Faris Al Fayez, who was part of a “reform event,” which was attacked recently. It also points to a public perception that has gone fairly unnoticed: more and more people are recognizing that the state is attempting to play the loyalty card in an effort to pit groups against one another, and while this has succeeded in some cases where demographic differences are apparent (Jordanian vs. Palestinian) it has essentially backfired amongst tribal members of this society, many who do happen to be reform-driven and don’t like to be called disloyal for being so.

How will any of this criticism play out in the months to come? God only knows. Suffice to say, two realities are being cemented in the public pschye: while most want the monarchy to remain, many feel that it is no longer an institution that is beyond criticism. In other words, mere critique of the King should not be mistaken by the casual observer as signs of upheaval. Such thinking has managed to push the red line the farthest that it has ever been, and this may actually be a good thing for the King. Not only does it allow him to be perceived as welcoming of critique in contrast to other Arab leaders who have taken a more brutal approach, but, given its predominant source, can serve in emboldening a reform agenda.

The King has frequently stated as of late that the Arab Awakening represents the opportunity he has been waiting for; an opportunity to tell the naysayers “look, this is what the people want.” However, while the naysayers, who favor the status quo they derive benefits from, are unlikely to be swayed by any democratic aspirations, be they regional or local, they will probably view such bold critique as a dangerous sign from what is perceived to be the King’s most stable element of support. In other words, if what stands in the way of the King’s pushing of a reform agenda is, as he states, a group of people who have long rejected it for their own benefit, then the breaking of this taboo may be enough to scare them in to action. With the criticism being heavily tribal based, it offers just enough political cover to secure the monarchy as an institution, while allowing reforms to pass without harming that institution.

But it will also depend largely on it increasing in volume and/or reach, from its tribal base.