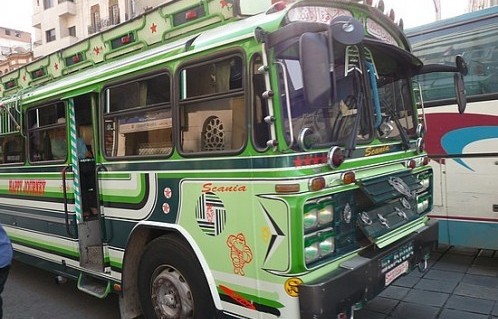 On a Friday in Damascus bus-stops are especially lonely places. You’d be sat waiting for a very long time, all alone, until you finally realise that there are no buses running at all. For several weeks now all intercity buses have been cancelled on the Muslim day of rest. It transpires that all those disused buses don’t disappear into a gigantic garage while the drivers get the day off. Oh no, they have other, more important duties to attend to than providing a service to the capital’s nearly 5 million inhabitants.

Instead Damascus’ green and red buses are packed to the rafters with soldiers or the shabiha, pro-regime paramilitary. And not just on Fridays, these improvised security vehicles are spotted criss-crossing the city every night of the week after evening Ramadan prayers. The government is commandeering public transport to ferry their strongmen across town to discreetly and efficiently crush the demonstrating suburbs.

Lights are switched off inside the buses, presumably meant to divert attention away from the ‘passengers’, but rather ineffective when the driver is honking furiously whilst ploughing through the traffic lights like a Formula 1 racer. The direction and urgency of the bus is usually a good indication of where demonstrations are taking place that night, as someone tweeted in warning ; “3 green public buses filled with security forces headed towards demonstration in back streets of Midan”.

The deployment of public transport is not just a sign of the regime’s overstretched and ill-equipped defense forces. It is also indicative of the shadowy nature of the Syrian security apparatus. Those sent to crush the demonstrations in Damascus are an indistinct mix of military personnel and plain clothes or uniformed thugs. The transportation of these different regime brigades in public buses fits nicely into the government reaction to the uprising; more ambiguity and denial.

A convoy of three public buses is somewhat less damning than a regiment of armoured vehicles. It’s not just your standard city buses joining in on the pretence. Mini-buses, taxis, even what look like yellow American school buses, transformed with a green paint job. It’s quite unnerving to spot what you thought would be a bus filled with innocent school children instead crammed with armed thugs fashioning trademark Assad moustaches. This deception both maintains the myth of normality in Damascus whilst at the same time ensuring that government deployments remain unidentifiable.

The incongruence of heavily armed passengers travelling in flimsy soft aluminium vehicles brings in another, more significant consideration than deception: Damascus can currently be pacified by the quantity not the quality of security. Swarms of baton/AK/teargas-canister bearing security forces are enough to disperse the crowds. Thankfully the regime has not brought out the heavy artillery on the capital, yet. Although one demonstrator from Midan district, central Damascus’ main flashpoint, did tell me recently that the security there have started to point a machine-gun mounted on the back of a truck at protestors. Let’s just stick with the buses, please.