Riyadh Book Fair Debacle is Nothing More Than Theater 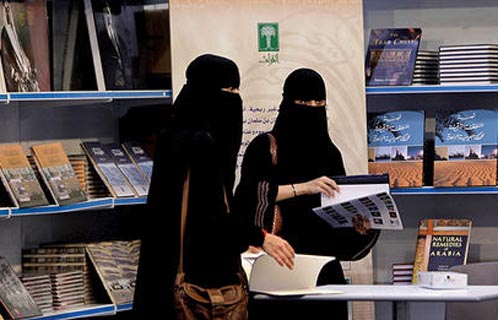 A common misconception among casual observers of Middle East politics is that Saudi Arabia is a monolithic entity that is the sole authority on foreign and domestic matters. Yet the debacle involving religious conservatives and a Saudi minister at the Riyadh Book Fair points to a much more complicated way in which the country governs itself.

The Saudi government in its brief 79-year existence has been far ahead of its people to modernize the country. The government brushed aside concerns from Islamic clerics and brought radio and television to the country 60 years ago. It abolished slavery and provided formal education for girls although there was no popular demand for it. Modern medicine followed. In 2009, the co-educational King Abdullah University of Science and Technology opened.

From King Abdulaziz Al Saud in prewar Saudi Arabia to King Abdullah today, Saudi leaders brook no interference in the government’s efforts to modernize the country.

But King Abdullah recognizes the government can’t force modernization on an unwilling people without checks and balances. That is why religious conservatives, who have little patience for such modern concepts as freedom of expression and gender equality, have wide latitude to behave badly. It’s not surprising that hardline religious conservatives last week disrupted the Riyadh Book Fair and intimidated its attendees. To many Saudis, their behavior is offensive. To others it makes a weird kind of sense.

The city of Riyadh holds its book fair annually, and this week more than 700 publishers representing 30 countries are participating. Conservatives nearly every year employ intimidation tactics to disrupt it and similar book fair gatherings, claiming the writings promote an un-Islamic agenda.

So why does a no-nonsense government with a history of implementing a progressive agenda stand for hooligans bullying writers and publishers?

The answer is the conservative religious establishment serves the government’s purposes.

Not unexpectedly, the incident outraged Saudi journalists. But the majority of YouTube comments posted under videos of the altercation support the conservatives.

The commission denied it had any role in the disruption, but it had all the hallmarks of a commission operation.

About 30 highly organized men barged into the fair, shouldered past security men and immediately divided into smaller groups spreading across the hall. Communicating through hand gestures or their eyes, they targeted the stage where writers were signing books and women speakers were preparing to address an audience. They bullied a female journalist not to take photographs. The group also sought out publishers of books deemed as secular or non-Islamic.

The commission could offer plausible deniability because the gang possessed no identification. The government did not concern itself with a minor confrontation since the group was not at the fair in an official capacity, .

Most telling, however, was the exchange recorded on video cell phones between the apparent leader of the group and Abdul Aziz Khoja, the Minister of Culture and Information. Invading Khoja’s personal space, the leader complained that “not even one religious lecturer” was part of the fair and most of the writers and speakers had “western tendencies.”

“There are seven or eight who have deviant tendencies and there is no wise man to answer those people,” the leader said, noting the fair had no representatives from the Islamic Imam and King Saud universities. “Who chooses these lecturers? The worst of them is Turki Al-Hamad (a liberal). Why didn’t you bring us Sulaiman Al-Dewaish and Youssef Al-Ahmad?”

Al-Ahmad is a noted conservative opposed to gender mixing.

Under any circumstances in Saudi society, such challenges to a government minister are rude. The fact that Khoja and his assistants tolerated such verbal assaults can be construed as tacit approval of the opposition to the fair. This was further exacerbated by the fact that after the exchange Khoja quickly left through the back door of the hall as if he was fleeing.

Tariq Alhomayed, editor-in-chief of the Arabic language newspaper Asharq Al-Awsat, argued in his column that the exchange between the conservatives and Khoja was “nothing more than an assault on the state and its authority.”

If Khoja shares the same opinion, he is keeping it to himself. “There’s no harm in having different views,” he later told reporters.

The Saudi government repeatedly demonstrates that it forges ahead in its agenda to bring the Kingdom into the 21st century regardless of what religious conservatives think, so the exchange between the lecturer and Khoja amounted to little more than theater.

The disruption at the book fair served its purpose by allowing the country’s conservative element a voice, but the fair runs through March 11 and the dissenters probably will not be heard from again. The Saudi government accomplished two goals: The book fair continues with its wide range of ideas from the world’s intellectuals and the conservatives got their 15 minutes of media attention.