Why What Worked in Egypt, Will Not Trip Up Iran 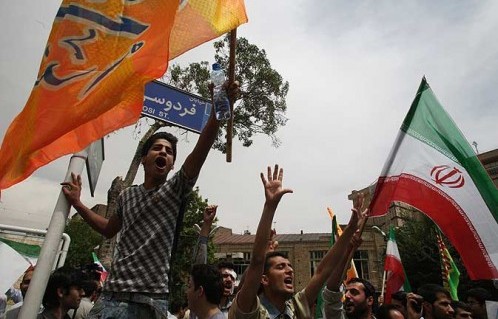 In identifying the differences and similarities between the recent Egyptian uprising and the one that resulted from the disputed presidential election in Iran, Pouya Alimagham points to an interesting and important point: The Egyptian regime, while enjoying broad international support, fell in just 18 days. This contrasts the Iranian regime’s ability to systematically squash a grassroots uprising that at one point included three million protesters.

Alimagham notes that Iran’s resilience in the face of mass protest deservers some consideration.

An equally important point is Iran’s attitude (and what enables this attitude to persist) in contrast to most other states in the region engulfed in mass demonstrations.

Both Mubarak and Bin Ali immediately conceded by offering “reforms.” Fearing their own uprising, states like Jordan and Saudi Arabia conceded in advance, with the latter offering its citizens $36 billion in benefits. (Ghadaffi never backed down, but he may lose his life over it). Iran, on the other hand, is taking steps that sharply contrast the conciliatory attitudes of other regional states.

Domestically, and in the midst of broad international sanctions, Iran is undertaking a significant and comprehensive economic reform plan which is likely to hurt and further anger the core of the opposition (middle class urbanites).

Internationally, during the last round of talks in Istanbul, Iran added two preconditions for moving forward with the P5+1: suspension of sanctions and acknowledging Iran’s right to enrichment, effectively asking the West, in the words of Reza Marashi: “Now what are you going to do?”

This is more than a case of resilience and defiance toward domestic opposition and the West. Rather, it raises questions on state capabilities. That is, in contrast to Egypt and Tunisia, what capabilities does the Iranian state have to withstand grassroots uprisings, and how were these capabilities gained?

As one veteran conservative Iranian diplomat put it, “we do not bow down to any power, unless that power is really powerful.” It seems that the US, together with European allies and domestic opposition can shake Iran, but are not powerful enough to break it.

Yet, only thirty years ago the Shah of Iran, who similar to Mubarak and Bin Ali enjoyed broad international support, was ousted by domestic opposition alone. This points to a qualitative shift in Iran’s capabilities over the past 30 years facilitated by one primary factor that distinguishes it from all other states’ in the region and the former Pahlavi regime: the experience of revolutionary crisis. It is, as such, worth trying to understand Iran’s capabilities in a revolutionary context and in doing so, the appropriate comparison would be to others states with successful social revolutions, namely France, Russia, and China.

There has been much debate about revolutions, particularly since the beginning of the Egyptian protest. But rarely has this debate touched on what a successful revolution really looks like, what capabilities revolutionary states gain, and how.

To look at Iran through the prism of revolutionary crisis, it is worth going back to Theda Skocpol’s seminal work on social revolutions. Skocpol illustrates some of the conditions that must exist for revolution to take place. These conditions existed in Iran prior to its revolution but no longer do, yet they continue to exist today in Libya, Egypt, Tunisia, Jordan, Saudi Arabia, etc. Further, Skocpol illustrates the course that a revolutionary movement must take in order for that state to benefit from the fruits of revolution and gain strategic capability; otherwise what is left has more in common with coup d’état.

Like Egypt and Tunisia today, France, Russia, China, and Iran were all at a transnational disadvantage prior to their uprisings. France’s competition with England exhausted its capacity to raise new loans and sent the economy into a severe recession and resulted in the bankruptcy of state’s financial institutions. Russia was entangled with a comparable, if not worse, vicious cycle of international competition. By 1915, the magnitude of Russian defeats in WWI had been acknowledged and the dominant strata of the Russian society lost confidence in the Tsar and his autocracy.

China and Iran were both characterized by political dependency which as Skockpol points out is the most severe case of transnational disadvantage. While, through their revolutionary crisis, France, Russia, China, and Iran overcame their transnational disadvantages, Egypt and Tunisia are currently characterized by political dependency and are firmly under Washington’s strategic umbrella. This means that in addition to domestic pressure caused by the uneven spread of capital, the international conditions for revolution are also ripe in Egypt and Tunisia. The same is not true with respect to Iran.

How was Iran able to move up the transnational scale via its revolutionary crisis? Revolutions are not static, but are processes. An important factor in revolutionary crisis are external wars, which as Skocpol notes are central and constitutive. Revolutionary France ultimately lost the Napoleonic Wars. Nevertheless, mobilization for war and military interventions in the midst of the unstable internal realm of France created a centralized bureaucratic mechanism at the disposal of the state.

The same is true with the Russian revolution and WWII, the Chinese revolution and the Sino-Japanese War, and the Iranian revolution during the Iran-Iraq war. In the case of the latter, the war was as much part of the revolutionary crises as the ousting of the Shah. In Iran, practically all internal opposition which resisted the dominant discourse of the war were wiped out, leading to a sense of stability in the face of an Iraqi incursion which confirmed the Islamic Republic as the true and undisputed legitimate authority of Iran.

By the end of the war, a highly centralized, effective, and flexible government had prevailed. Internationally (militarily, politically, and ideologically) Iran started accumulating strategic capabilities, a process which excelled after the fall of Iraq and reached its apex during the Hezbollah-Israel war.

3 Responses to Why What Worked in Egypt, Will Not Trip Up Iran