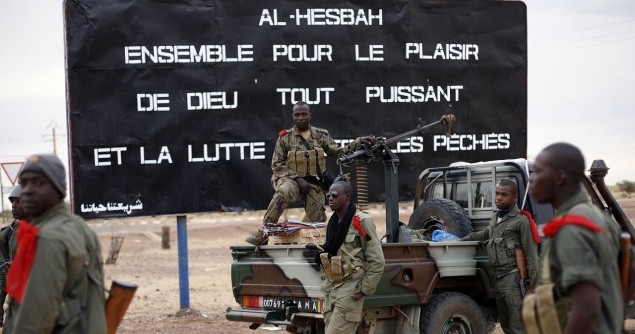 Claims that Qatar is supporting a range of Al Qaeda-affiliated groups in the Sahel are not new. In June 2012 the French satirical magazine Canard Enchaine quoted French Military intelligence sources asserting that Qatar was financially supporting various groups such as Al Qaeda in the Islamic Maghreb (AQIM) and its splinter group the Movement for Unity and Jihad in West Africa (MUJAO). The reports are vague but usually refer to financial support from Qatar, while some refer to Qatari planes landing at Gao disgorging arms and even Qatari Special Forces entering the fray.

Qatar is one of only two Wahhabi states and it did name its new state mosque the Muhammad Ibn Abdul Al Wahhab mosque late last year. But Qatar is a box full of contradictions. Alcohol is easily available as is pork. Women can drive (nor has this been an issue) and Qatar has the most visible, outspoken and influential female consort in the history of the Arab world. Western education systems are at the heart of the state and there is not even an official mosque in the entire propose-build, multi-billion dollar ‘Education City’ campus housing the six American Universities as well as University College London.

Externally Qatar’s policies can appear confused. Support of America by virtue of the two huge US bases in Qatar and significant (usually unwelcome) outreach to Israel in recent years is contrasted with seemingly amicable relations with Iran and support for Hamas and Hezbollah. More recently a record of enormous investment in London and Paris has been contrasted to escalating support of the Muslim Brotherhood across the Middle East and seemingly murky support of groups in the Sahel. Moreover, Qatar has been outspoken in its sub-state support of various groups in Mali’s regional neighbourhood in the last eighteen months.

A loose narrative has built suggesting that an ever increasingly confident Qatar is now beginning to support a range of ever more extreme Islamists across the region.

On the ground realities

Examining exactly what Qatar is doing in Mali is difficult. Qatar never enlightens anyone as to its foreign policy strategies or tactics and nor are there sufficient reliable sources of information in and around Mali.

The best one can say is that in addition to a lengthy history of interaction in the region the Qatar Red Crescent Society increased its capabilities in Mali in 2012 evaluating the state of the plight and the their potential response. This occasionally involved entering Mali from Niger to get to the critical city of Gao. According to an AFP article this in and of itself involved seeking safe passage from the MUJAO, an Al Qaeda offshoot.

The very fact that the two organisations came to this safe passage agreement may well be a root cause of much of the subsequent supposition, with many assuming the transit agreement to be a signal of deeper connections. Yet this is what the Red Cross/Crescent does; it sticks to its central tenet of neutrality in a conflict and deals with the realities on the ground making tactical deals to obtain access when it can.

There is no open source evidence available whatsoever that can back up assertions made by Sciences Po’s Sub-Saharan African expert Roland Marchal who suggests that Qatari Special Forces may have entered Northern Mali to train recruits of Ansar El Dine, which is part the Al Qaeda movement there. Indeed, aside from the Canard Enchaine assertion – which has even been partially retracted – there is nothing on which to base other assertions of Qatar financially supporting Al Qaeda affiliates in Mali other than supposition.

The majority of the hyperbole about Qatar seems to stem from the adage that there’s no smoke without fire. It is unsurprising that the Mayor of Gao accuses the Qataris of supporting terrorism. From his perspective he is making a heartfelt plea for French intervention and he sees the Qatari Red Crescent Society gaining access to territory held by MUJAO. Doubtless he puts one – Qatar, the Wahhabi, rich Libyan-Islamist supporting Gulf State – and one – the Qatari Red Crescent gaining privileged access in MUJAO controlled territory – together and comes to the conclusion that ‘Qatar’ is supporting the terrorists.

Marchal too follows this logic. Qatar was active in Sudan and then in North Africa supporting various Islamists with financial support and Special Forces therefore – QED – Qatar is active in Mali doing the same thing.

While some of this is plain alarmism from those who know little about Qatar, some of it makes sense. The argument that Qatar saw how effective its support of various Islamist groups in Libya proved to be and thus sought to reuse such tactics in Mali is a logical proposition. One could also note that gaining support in an area rich in hydrocarbons and agriculture is also potentially a sensible and explanatory as a motivating factor.

Equally, however, there are many reasons as to why Qatar would be highly unlikely to be meddling with Al Qaeda groups in the Western Sahel. Despite Qatar’s reputation as a Wahhabi and Brotherhood-supporting country Qatar’s most important allies are America, the UK, and France. Qatar has a limited domestic capacity to defend itself and finds itself in a region that has seen three wars in three decades and where it is sandwiched between the two regional behemoths, Iran and Saudi Arabia, both of whom have somewhat antagonistic histories with Qatar. The Qatari leadership is under no illusion as to where its security reliance lies; resolutely in Western hands.

Countering this notion one could argue that its leadership feels it can do what it likes as its importance is so great to these key countries. But an equally key part of the Qatar project is deeply concerned with its global reputation. Through cultural events; educational investment; a variety of sporting events; world-class conference facilities and associated apparatus; and other soft power building initiatives, Qatar places a significant premium on making itself attractive internationally. To boost investment, economic diversification and Qatar’s reputation overall it wants to be known as ‘that place where England played Brazil at football’ and that ‘will host the 2022 World Cup’; it does not want to become ‘that place that supported Al Qaeda in North Africa.’  Supporting the Muslim Brotherhood – the group elected to power in several Arab states – is one thing, supporting Al Qaeda affiliates is another.

One must note that the narrative that has built up castigating Qatar suits the Algerian Government. The increasing break between Doha and Algiers with the latter bitterly resenting Qatar’s involvement funding Islamist groups in Libya and Al Jazeera fanning Islamist flames is no secret. Qatar hosting in exile Abbasi Madani, the co-founder of the Islamic Salvation Front (FIS), the Islamist party whose near election win in 1991 precipitated the cancellation of elections and Algeria’s bloody decade-long Civil War, doubtless irks the elite in Algiers too. Given the almost entire lack of actual evidence of the Qatari state nefariously supporting Al Qaeda associated groups in the Mali theatre and the way this notion fits with the Algerian Government’s desire to hit back at Qatar, it is unsurprising that at least one North African expert has suggested that ‘Algerian propaganda’ may well be playing a part.

Lastly it is worth pointing out that the small group of people who make decisions in Qatar relating to foreign affairs – the Emir, the Crown Prince and the Prime Minister/Foreign Minister – have shown no interest in the past decades of supporting hard line salafi elements such as Al Qaeda. It is entirely plausible that some Qatari money is finding its way to supporting nefarious elements in the Sahel and there may be Qatar-based charities that engage to such ends, but the odds of a member of the Qatari elite ‘ordering’ such a plan stretches credulity.

Overall, there appears to be no evidence for the more outlandish claims that Qatar is training or financing Al Qaeda-splinter groups. Not only would this idea contradict key tenets of Qatar’s foreign policy for decades now, but it is wholly unclear how useful it would be to befriend a group of extreme Sharia-devout Al Qaeda types in northern Mali. Even before they were being routed by the French, they were hardly a cohesive, structured organisation that could offer Qatar meaningful promises or guarantees.

Instead Qatar’s reputation as supporting certain, typically Brotherhood-orientated Islamist groups in North Africa and a melange of clichés about rich, Wahhabi, conflict-fuelling Gulfies seems to have coalesced, perhaps with some judicious prodding by Algeria, with a basic misinterpretation of the role and practice of the Red Crescent. The ‘Qatari policy’ that this theory asserts may chime with base fears and assumptions and fit snugly into existing narratives but in reality bears little resemblance to Qatar’s state foreign policy thus far.