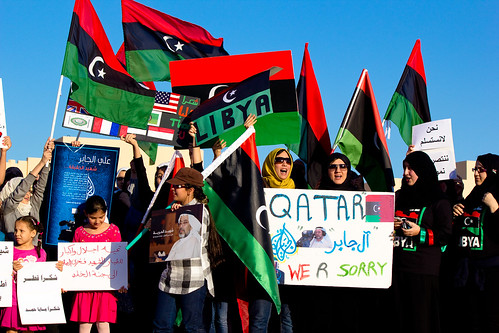 Scores of people rallied outside Libya’s embassy in Qatar on Sunday, calling for Libyan leader Muammar Gaddafi to go.

“I want [Gaddafi] dead – definitely I want him gone,” Mustafa Sharif, a 48-year-old Tripoli native, told Doha News on the sidelines of the rally. “We’re here to support our people and tell them we are with them.”

The event appeared to be government-sanctioned, with a dozen or so policemen cordoning off the area but not making any attempts to break up the crowd of around 100 men, women and children.

“We didn’t know what was going on [in Libya] until Al Jazeera went there,” said Hoda, a Saudi artist living in Qatar who is married to a Libyan man.

“Libya is supposed to be one of the best countries in the world … it has so much money. Gaddafi does’t deserve to be president.”

Oil-rich Libya has $70 billion in assets and a sovereign wealth fund whose fate has become uncertain since unrest spread throughout the country last month.

Umm Dareen, a 30-year-old Egyptian woman at the protest, said she attended the rally out of solidarity with her fellow Arabs. But she added that she felt the situation in Libya is very different to that of Egypt, whose long-time president, Hosni Mubarak was forced to step down in February amid popular unrest.

“In Egypt, all the country was on one side – only the president was on the other,” she said. “In Libya, people are divided.”

As the crowd in Doha chanted “Libya, freedom freedom – Gaddafi, out out”, US Joint Chiefs of Staff chairman Mike Mullen announced Qatari aircraft were taking position near Libya as part of a US-led operation to established a no-fly zone.

The moves by the UN-backed coalition aim to halt Gaddafi’s assault on Libyan anti-government forces in the north of the country.

“We all agree on the no-fly zone to protect our people,” Sharif said.

Ayman, 37, another Tripoli native at the rally, expressed gratitude towards Qatar for supporting the Libyan people.

“Qatar has been very supportive – letting us protest, participating in the no-fly zone,” he said. “[Gaddafi] has been killing our families, and we want this to end.”

Omar Chatriwala is a freelance journalist based in Doha, Qatar.