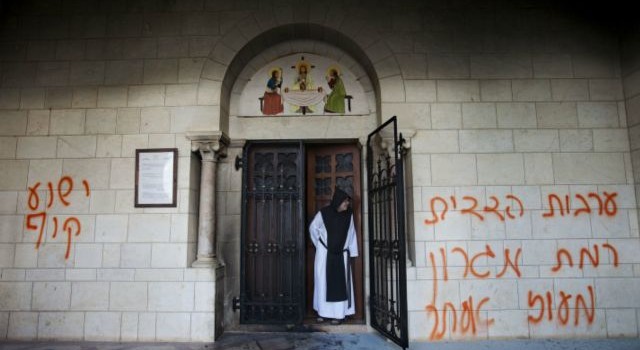 Early Wednesday morning Ha’aretz reported (Hebrew, see also English report here) a so-called “price tag” attack against Palestinian citizens in the neighborhood of Sharafat in the village of Beit Safafa.  The vandals punctured tires on 30 automobiles and spraypainted the words “Arabs = Thieves” and “No Coexistence” on a wall.  The Palestinians who witnessed the crime stood helplessly by. Their only recourse was shooting video footage of the masked perpetrators.

This type of vandalism is as Jewish Israeli as matkot (beach paddle ball) and is becoming increasingly as common.

According to a webpage announcing a forum on the subject, a price tag attack is:

… the name for acts of vandalism aimed at the Palestinian population, often against Christian and Muslim places of worship, and also against leftist Jewish institutions and Israeli security forces, perpetrated by fundamentalist Israeli settler youths attempting to exact a price for actions perceived to be against their settlement enterprise.

The attacks are actually overwhelmingly against Palestinian targets, but it is true that occasionally these acts of violence and vandalism are directed against Jews.

Dr. Gadi Gvaryahu, a Jewish Israeli, is chairman of something called the Price Tag Forum. He led a September 16th public panel discussion on that subject. Gvaryahu told Ha’aretz addressing the Sharafat vandalism:

‘Price tag’ crimes continue to cause massive damage to Arab property in Jerusalem and its surrounding area – they go unchallenged.  The security and property of the Arabs of Abu Gosh, Sheikh Jarrah, Beit Hanina, Abu Tor, Beit Safafa, and Sharafat are not protected by the Israeli government.   Prime Minister Benjamin Netanyahu actually has lost control of the Arab neighborhoods in Jerusalem.

It is very comforting, I am sure, for Gvaryahu to suggest that the Israeli authorities want to control these young super-Zionist settlers.  However, the price tag hooligans’ message is an all-Israeli message addressed to the minority Arab population, which is supported by the great majority of Jewish officials, members of the Parliament and the general population.   That message is —“Arabs, you are not wanted here on land that belongs to us – the Jews.”  It is the same message the Israeli government has sent to its Palestinian citizens ever since the founding of the Jewish state.

Larry Derfner wrote a good piece on +972, on settler violence a month ago.  He said that everybody in Israel but the most radical fringe will denounce it, yet no one will do anything to stop settler violence. And “[the] world doesn’t penalize or even threaten to penalize Israel for it.”

If a decades-long reign of terror on unarmed Palestinians by Jewish gangs backed by an army of occupation is tolerable, not only to Israel but to the United Nations, European Union, United States and the rest of the world, then everything Israel does to the Palestinians is tolerable. Then the occupation as a whole is tolerable.

The price tag crimes are just another reason for activists to support the BDS movement.  Any government that even tacitly supports this Jewish reign of terror against its own citizens is not likely to come around to supporting even a castrated two-state solution because of reason and goodwill alone.