The Poison of ‘Exceptionalism’: Putin and Obama Compete 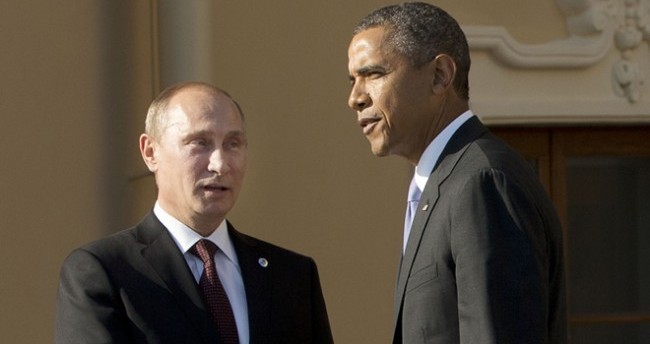 It is mind blowing to have Vladimir Putin lecture President Obama and the world on democracy and justice. But there it is, in the New York Times no less, just days after the President punted on Syria.

Like politicians everywhere, Putin is a self-promoter and a peddler of half-truths and lies. As in, Russia is a model citizen in the United Nations. Or that’s his country’s history is so pacific internally and non-interventionist externally that he can speak from a moral platform.

In Putin’s vision of Russia the Gulag’s are mirages and the Iron Curtain is already too ancient a history to be accessed. His historical amnesia extends to his personal life and his achieved dictatorial ambitions. Listen to Putin-speak at your own risk.

Putin’s pretense of Russian altruism and search for democracy in Syria is ridiculous. Nor should Putin’s systematic rebuilding of Russia’s empire mentality and political promotion of the regressive Russian Orthodox Church be forgotten. Nonetheless, when at the close of the editorial Putin chastises President Obama on American exceptionalism, his words are worth contemplating:

My working and personal relationship with President Obama is marked by growing trust. I appreciate this. I carefully studied his address to the nation on Tuesday. And I would rather disagree with a case he made on American exceptionalism, stating that the United States’ policy is “what makes America different. It’s what makes us exceptional.” It is extremely dangerous to encourage people to see themselves as exceptional, whatever the motivation. There are big countries and small countries, rich and poor, those with long democratic traditions and those still finding their way to democracy. Their policies differ, too. We are all different, but when we ask for the Lord’s blessings, we must not forget that God created us equal.

Putin’s closing paragraph is a textual goldmine, starting with his relationship with President Obama. “Growing trust” is an interesting way of cloaking a partnership that is more like a divorced couple who can’t get each other out of their minds. Or former lovers who circle each other looking for the next opportunity to throw a verbal jab. Putin and Obama are increasingly tied together. If either disappeared the other would be bereft.

For a man who perpetually moves from President to Prime Minister and then back again, Putin doesn’t think the equality clause applies to him. And if you pay attention, the exceptionalism charge leveled at America doesn’t apply to him either. Putin thinks he’s the only person fit to rule Russia. If we stretch Putin’s sensibility to Russian literature, Russia’s Fifth Gospel, is there anywhere to be found a more self-involved and exceptionalist-oriented literature?

It takes one exceptionalist culture to know another. But isn’t that true with all cultures – and religions? You can’t find a more exceptionalist religion than Christianity – unless you look over your shoulder and see Islam. Over Islam’s shoulder is Judaism. Don’t forget Hinduism and Buddhism and their exceptionalist claims. Beware, too, of modernity-loving universalists lurking in the background. They enable the most exceptionalist empire enterprise the world has ever known.

This includes the various forms of Jewish exceptionalism alive today – the unjust and abusive Constantinian Jewish form and the justice-oriented and assertive form that Jews of Conscience embody. For what is the world without a sense of destiny and uniqueness except a meaningless playground where we live out our lives and die for no reason other than having lived? How can we struggle for justice without an ideal beyond what we find ourselves and in the world we encounter?

Exceptionalism is a highly charged concept. And, of course, exceptionalism has to be disciplined at all times, which brings us back to the prophetic, the deepest exceptionalism, in service to others.

Perhaps it would be better for Putin and Obama to think through their relationship to the prophetic than to their self-serving politics of the moment. If the prophetic was centered on the suffering people of Syria, the politically posturing of both Presidents might be seen for it is. Then instead of arguing about chemical weapons the world might be mobilized to do whatever is necessary to end the bloodshed in Syria.

One Response to The Poison of ‘Exceptionalism’: Putin and Obama Compete