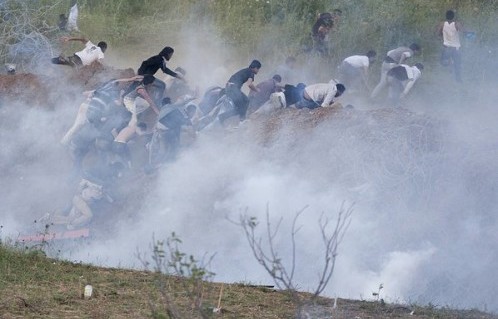 There has been much speculation in the media that the Assad regime in Syria will be the next to fall in what has been called the “Arab Spring”. Many analysts conclude that Sunni elements in the country, which make up about 70% of the population, will rally against the ruling Alawis, who have controlled the country for the past 41 years. A transfer of power, it is claimed, will only be expedited by worsening economic conditions for most Syrians, Western sanctions against the country, and a heavy crackdown that is beginning to invigorate the heretofore quiescent Sunni middle classes of Aleppo and Damascus. But Syrian domestic politics (or lack thereof) has always been a function of regional dynamics. The unanswered question is whether Assad’s foreign policy vis-a-vis Israel will allow him to weather this storm. Until now, the Arab League has not called for Assad to step down.

After the fall of Ben Ali in Tunisia and Mubarak in Egypt, western analysts pointed to the similar circumstances that Syria finds itself in: high youth unemployment, pervasive corruption, and a ruling elite that has lost domestic legitimacy. But these analysts, often American- and European-based reporters, neglect some important facts that make Syria a truly unique animal in Middle Eastern geopolitics. Most significantly, Palestine remains a hot-button issue. Assad may have decided that his defensive maneuvers — preventing (or preempting) defections within his Army and preventing momentum from swinging towards the rebels — may be enhanced by actively provoking Israel and constantly raising it as an issue. Defected Syrian soldiers in Turkey have told journalists that they are being ordered by their officers to fire on the protesters (sometimes people from their own villages) to prevent a weakened Syria from falling prey to (as they call them) “the hostile Zionists.”

Despite the quickening pace of developments in Syria, it remains unclear whether the Arab street’s sensitivity to the Palestine issue is actually helping to hold the Syrian regime together, or working to tear it apart. Bashar Assad’s Syria, unlike its other neighbors, consistently refused to sign a treaty with Israel. The regime’s policies reflected, more accurately than any other Arab country, the sentiments of the Arab street toward Israel: resistance, perseverance, and Arab cooperation.

As the last Arab state to afford the Palestinian cause considerable support (if only rhetorical at times), it almost always sided with regional popular opinion in spite of considerable Western pressure to do otherwise. The Palestine issue allowed Assad to maintain his street credibility at little or no cost to his regime. And through his state-sponsored media machine and sophisticated PR moves, Assad publicized his alliance withthe popular leader of Hezbullah in Lebanon, Hassan Nassrallah, a thorn in Israel’s side.

But as more Arab publics are finding their collective political voices and choosing to shrug off western-backed despots, Assad is finding it increasingly difficult to claim the Palestine issue as his own. The Egyptian interim government, under the direction of General Muhamed Tantawi, has opened the Rafah border crossing with Gaza, allowing some freedom of movement for Gazans who had been living in an Israeli-imposed outdoor prison since 2006.

This gesture toward the Palestinian people must not go underestimated: Egypt’s new-found support for the Palestinian cause — initially as a broker in the unity talks between the Palestinian parties Fatah and Hamas — will inevitably weaken the Assad narrative that suggests that the leadership of the resistance to Israeli hegemony lies in Damascus. This will in turn reveal (or just reaffirm) to the Arab street Assad’s manipulation of the Palestine issue in order to choke off dissent in his own country. The only Arab support that Assad seems to have now is lukewarm support from Hezbollah, which is anyhow at the financial mercy of the Assads. Rumors that Khaled Meshaal, a leader of Hamas, will leave Damascus at some point for Qatar may be further proof that the resistance is decentralizing while not necessarily weakening.

But the Assads have mastered the use of the Palestine issue to suit their own interests, and it would be irresponsible to count them out now. After the failure of its strategy of appeasement (the regime sought to appease protesters with highly public but largely symbolic gestures such as increases in fuel subsidies and public sector salaries, lifting of the emergency law, etc.), a major component of the regime’s new strategy is to deflect attention away from domestic problems with astute use of the Palestine issue, while at the same time portraying the protests as foreign, tribal, and not emanating from any structural deficiencies.

On Nakba Day (commemorating the1948 defeat and expulsion of the Palestinians), the Syrian government reminded its citizens that they faced greater problems than a lack of transparency and corruption in government. By allowing Palestinian refugees to storm the border fence with Israel at Quneitra, the regime once again put the Palestine issue front and center, using it as a vent for the multitude of anxieties in Syrian civic life. And on Naksa Day, the day that commemorates the beginning of the 1967 war (Naksa is an Arabic word meaning setback), armed men could be seen on the Syrian side of the border, probably trying to draw fire from the Israeli Defense Forces, as more Palestinian refugees stormed the border with Israel. Syrian state TV reported 18 deaths and 227 hurt, probably an exaggeration.

Such astute use of the Palestine issue for domestic political purposes suggests that Assad could endure well longer than most analysts would like to admit. Yet, the Syrian rebel movement(s) may not be far from reaching a critical mass. At one point it seemed that Syria might have its equivalent of Muhammad Bouazizi, the Tunisian vegetable vendor who set himself ablaze in a last-ditch effort to attract attention to the dire circumstances that many Tunisians find themselves in. The tragic story of Hamza Alkhateeb, a 13 year old Syrian boy who was brutally tortured by the Syrian authorities, prompted a series of violent demonstrations in the southern city of Dera’a. The information section of the Facebook page entitled “We are all Hamza Alkhateeb” notes that “Hamza was one of hundreds of people who were detained, & his tortured body was later returned to his family with his genitals cut & bruises all over his body. We will never be silent. We are all Hamza Alkhateeb.”

Aside from the importance of this story as a rallying cry for Syria’s protesters, the ubiquity of such stories in the regional press will almost certainly grab the attention of the Arab street. The street will not fail to notice that abductions, torture, and indiscriminate firing on civilians are now routine. If the Arab League’s support for NATO airstrikes in Libya demonstrated the importance of Arab public opinion in that conflict, it does not bode well for Assad that his violent suppression of democracy protesters has all of the trappings of the Israeli Defense Forces’ expedients during the first and second intafadas.