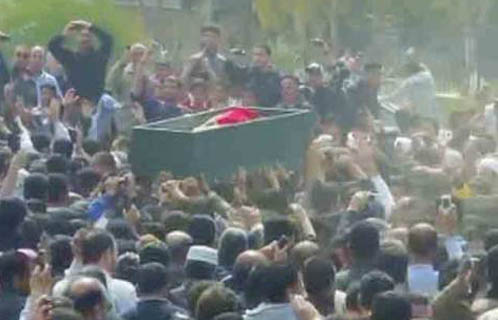 Oppression and violence against peaceful protesters in Syria has taken a more violent and brutal turn. The regime has sent out animals to the streets, armed to their teeth with bullets that pierce the flesh of innocent civilians, their very own countrymen. Armies have been deployed in cities as if they were occupied by some foreign heavily armed forces.

Tanks wander the streets to spread terror. Snipers and sharp shooters riddle the rooftops in anticipation of any moving soul in the empty lifeless streets. It’s hunting season for them. “Shoot anything that moves” their orders are apparently. And shoot anything that moved they do. More than four hundred innocent unarmed civilians have been killed by the Syrian security forces, thugs and army since the start of this uprising. And it doesn’t seem like it’s letting up anytime soon.

When I replied to some of my friends and cousins in and out of Syria who were defending the Syrian murderous regime I approached the matter as a mere difference of opinion. They are supporters of a certain approach or status quo and I have reasons for that status quo to change.

Now, however, things are different. When you defend this regime, you’re defending the murder of hundreds of innocent civilians. You are defending the killing of children and the unjustified arrest of hundreds of innocent people. You are defending a lying, murdering, deceitful regime that is actively practicing state terror and actively hunting down any form of peaceful resentment and killing and/or arresting every and anyone who dares to speak up. This has gone too far.

When you support an ideology or a political party, you’re practicing your democratic right and freedom of speech. When you support the brutal, inhumane and unholy murder of your own countrymen, you’re committing treason.

The regime tells us these are Salafists, terrorists, infiltrators, agents of the West who wish our country harm, who wish to compromise Syria by destabilizing it from within. The regime is right…but it’s only right because it believes that Syria is the Baath Party and the Baath Party is Syria.

Yes, we do wish to destabilize the Baath regime, we want to compromise its integrity, because we simply want it gone. Why? Well let’s assume it was so good to Syria before, the way it’s been “managing” the recent protests is reason enough for them to go.

They think they’re immune to punishment. They think they can hide behind their walls and weapons and shoot at their unarmed subjects. They think the Syrian people are slaves who either obey or else. They are wrong. Bashar, Maher, the Makhloofs, Shawkat, even Rifa’at and Khaddam…it’s only a matter of time.

To these thugs I mentioned above…the mafia heads who deserve to die for their treason, and to those making and executing the decisions in this dying regime I say this: Your hands are stained with the blood of your countrymen and the tears of their mothers, fathers, brothers, sisters and children. One day you will pay for this, in this lifetime or the next. Your ivory towers will not protect you from the wrath of people or God Almighty. One day, you will pay.

Born and raised in the UAE, a Syrian national, and a Human Resource Manager at a contracting company. I'm most interested in politics in the Middle East in particular and the World in general. I scan the news realm on a daily basis and write what I feel and think about it, and how occurrences may or may not be related to each other. My posts reflect my opinion and thoughts and no one else's. You can follow me on Twitter: @Khaledtron Or check my blog site: http://measternpoles.blogspot.com