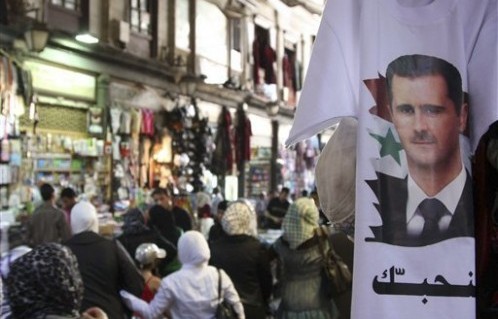 Activists who have been very careful to paint a picture of a peaceful Syrian uprising, have finally admitted that some protestors are armed.

Of course, this does not justify the security forces’ crackdown, but it means that there is some truth to the crude state propaganda that we have been rejecting since March. It also means the opposition may alienate some of the Syrian population who blame protestors for the chaos engulfing Syria.

Most of the opposition to autocratic President Bashar Assad has taken the form of peaceful protests by unarmed demonstrators, though authorities have claimed throughout the uprising that it was being led by armed gangs and propelled by foreign conspiracies.

Two activists in the area said residents of two towns under attack in central Homs province since Sunday had taken up arms against troops and members of the security forces.

He said many people are armed in Syria and over the past years weapons have been smuggled into the country from Lebanon and Iraq.

Monday’s accounts by the two activists, however, were the first credible reports of serious resistance by people who have taken up arms. It is not clear how widespread such resistance might be elsewhere in the country, but the government has claimed that more than 150 soldiers and policemen have been killed since the unrest began.

Now, this is a half-hour read, but is one of the most fair accounts of the complexities surrounding the Syrian uprising. Things are not as black-and-white as the YouTube activists would like you to believe.

Adham is an atheist whose family is of Shia background. Being an atheist and coming from a Shia family, he is in no way sympathetic to Sunni Islamism. Therefore, it’s telling when he affirms that “there are no Salafiin in Dera’a. I can say for sure that any group of such people that exists is very, very small.”

Rather, he explains that the government’s siege has been effective in unifying the muhafiza of Dera’a against it. By treating the entire muhafiza as criminal, the sentiments of most of its inhabitants (not just those inside the city of Dera’a) have turned against the regime. It’s interesting that identity runs not only along religious, ethnic, and tribal lines, but also along geographical lines, in that the people of Dera’a—not only the city, but the entire muhafiza—are viewing themselves as a unit, separate from those who comprise the leadership of Syria. “I can say that 90% of people in the entire muhafiza are against the government,” Adham says. Rather than viewing the uprising as one of sectarian character, he explains that “my brother’s family in the city of Dera’a has Christian neighbors. There are many Christians in the city of Dera’a and in other villages who have joined in the protests.”

Dera’a is becoming a unit—I hesitate to say almost separate from Syria—not only in how people there are beginning to view themselves as separate from the state (an understandable effect after feeling attacked by the state), but in the way many other Syrians are reacting to Dera’ans. Adham tells me that in the hospital where he works in Damascus, he is experiencing a new, unmistakable resentment and coldness from his coworkers. “They say nothing, but I can see in their faces that they blame us for the current situation in Syria.” He says that he doesn’t feel safe responding to the opinions voiced by people in his workplace. He believes that people’s opinions are misled and mistaken, but if he defends “his own” Dera’ans, he fears reprisal.

And finally, if you only read one thing on Syria, read this…

A good number of Syrians want to believe the regime’s version of events because they are genuinely fearful of the chaos regime-change could unleash. Others are guilty of class and sectarian prejudices, and ascribe only the worst intentions to the ‘mob’. Others still suffer what must be called a slave mentality. They have grown so used to justifying the government’s violence against them that they now believe it has a perfect right to murder men, women and children, as many as it sees fit.

Most Syrians, however, have had their illusions shattered. Their president kills to keep his seat. It only makes it worse that he once pretended to be something different. The nationalist pretensions also ring hollow after the president’s cousin told the New York Times, “If there is no stability here, there’s no way there will be stability in Israel.” Syrians had previously been told that their half-century State of Emergency was designed to confront Israel – which occupies the Syrian Golan Heights – not to protect it.