Palestine Reclaimed: A Return to The Hill-Top of Iqrit 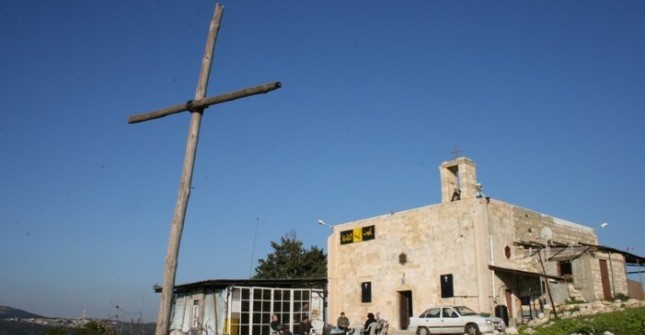 A dream long nurtured by hundreds of thousands of Palestinians made refugees during the establishment of the state of Israel has become a concrete reality at a small makeshift camp atop a windswept hill.

A dozen young men have set up the camp at a site in the Upper Galilee from which their grandparents were expelled more than six decades ago.

Today, all that remains of the village of Iqrit, close to Israel’s border with Lebanon, is a Catholic church on the hill’s brow. But in 1948, the village was home to 600 Christian Palestinians.

Walaa Sbeit, one of the camp’s leaders, said the group had been inspired by a vision of rebuilding their village.

“We never lost the connection to this place,” he said. “Every summer we hold a summer school here for the children to learn about the village and their past. And once a month the villagers hold a service at the church. For us, this was always our real home.”

In 1948, some 750,000 Palestinians were expelled from more than 400 villages as the new state of Israel was declared on a large part of their homeland – an event known to Palestinians as the nakba, or “catastrophe”. The refugees – mostly descendants of those driven from their homes – now number around five million, according to the United Nations Relief and Works Agency.

Nearly all the emptied villages were later destroyed by the Israeli army to prevent the inhabitants, and the generations which would follow them, from ever returning home.

“Until we moved in, the only way back to our village was in a coffin,” said Sbeit, a 26-year-old music teacher in Haifa, 50km away. “We have the right to bury our dead in the village cemetery, but not to rebuild the homes that were taken from us.”

Sbeit and his friends have been staying at Iqrit in shifts since August, living in an improvised annex to the church that houses a sitting area and kitchen.

They have tin shacks nearby serving as a toilet and shower, and two donkeys. Saplings they planted and a chicken coop were destroyed by the police, Sbeit added, as he perched on the edge of one of the outdoor beds the group have been using since the winter rains ended.

The villagers of Iqrit belong to Israel’s minority of 1.4 million Palestinian citizens, a quarter of whom were displaced from their orginal homes in 1948. Today, the Palestinian minority live in more than 100 Palestinian communities that survived the Israeli army’s advance.

Sbeit and his companions are at the forefront of a movement among the refugees inside Israel to turn the right of return from an what has sounded like an increasingly empty slogan into a practical plan of action.

Although Iqrit’s 80 homes are long gone, a residents’ committee is due to publish a master plan for the village in the summer, showing how it would be possible to build a modern community of 450 homes, including a school, for the villagers-in-exile, who today number 1,500.

The plan has been drawn up by a professional planner from the Technion, Israel’s leading technical university.

Iqrit’s refugees are also involved in a pilot project to work out the practicalities of implementing the right of return, understanding the legal, technical and psychological problems facing the refugees.

“This really is a historic moment for the Palestinian community,” said Mohammed Zeidan, head of the Nazareth-based Human Rights Association, which has been helping to organise the project. “For the first time, we are acting rather than just talking.

“The villagers are not waiting for Israel to respond to their grievance, they are actively showing Israel what the return would look like.”

It is not entirely surprising that Iqrit should be leading the way on the refugee issue.

Iqrit’s inhabitants were neither expelled nor forced into flight, as happened in most other villages. They surrendered in November 1948.

According to 70-year-old Lutfallah Atallah, the villagers agreed to leave Iqrit after receiving a promise that they would be allowed to return when the army had completed its operations in the area. Shortly afterwards their village was declared a closed military area.

“We were put in army vehicles and driven to the village of Rama, and told we would be allowed to return within 15 days,” said Atallah. “We’re still waiting.”

Israel does not deny that the promise was made, and the villagers’ right to return was backed by the country’s supreme court in 1951. Six months later, the army blew up the houses in a move designed to stop the ruling being enforced.

Shadia Sbeit, coordinator for the Iqrit residents’ committee, said that in the early 1990s, under growing pressure to honour its pledge to the villagers, a government panel agreed to set aside a small area for Iqrit to be rebuilt. The deal fell through when the prime minister of the time, Yitzhak Rabin, was assassinated.

A later prime minister, Ariel Sharon, decided in 2002 that the promise to the villagers of Iqrit and another village, Biram, could not be implemented because it would set a precedent for the return of other refugees and threaten Israel’s Jewish majority.

“The refugees from Iqrit are all Israeli citizens,” he said. “Letting them back will not make Israel any less ‘Jewish’.”

The villagers’ push to recreate Iqrit comes as Israel’s treatment of the refugees from 1948 is under renewed scrutiny, particularly in relation to the circumstances in which the refugees abandoned their homes – and whether Israel’s leaders ordered a program of ethnic cleansing.

Documents recently unearthed by an Israeli researcher, Shay Hazkani, confirm suspicions that a historical claim Israel has used as its chief justification for denying the refugees’ right of return to their homes was invented by Israeli officials.

The files, located in the state archives, reveal that David Ben Gurion, Israel’s prime minister in 1948 and for many years afterwards, set up a research unit in the early 1960s to try to prove that Arab leaders had ordered the Palestinian villagers to leave.

Israel’s move was a response to growing pressure from the United States president of the time, John F Kennedy, that it allow several hundred thousand refugees to return to their lands.

According to Nur Masalha, author of several books on Palestinian refugees, Ben Gurion believed Israel would win greater international acceptance of its rejectionist stance if it could show that the villagers left under orders from neighbouring Arab leaders, rather than because of mass expulsions.

Other documents have shown that the Israeli army physically expelled Palestinians from at least 120 villages, while in most other cases the inhabitants fled in terror as their village – or neighbouring ones – were attacked.

Minutes of a meeting in 1961 reveal Ben Gurion telling defence officials that Israel must prove the refugees left “of their own free will, because they were told the country would soon be conquered and [that] ‘you will return to be its lord and masters and not just return to your homes’”.

Israeli scholars were recruited to produce a report making Israel’s case at the UN. They were given access to secret documents, including those captured from British and Arab sources, most of which were subsequently burnt.

The director of the unit, Rony Gabbay, conceded to the Israeli newspaper Haraetz in an interview in May that there was no evidence for the claims made in the report Israel later published.

“There was no mention [in the archives] of the local Arab leaders urging the Arabs to flee, that they ‘pushed them’, as we claimed in our hasbara [propaganda]. I saw nothing like that.”

Israel has been equally embarrassed by other recent disclosures that have challenged its version of the 1948 war.

Earlier this year, an Israeli magazine published a lengthy interview with Yerachmiel Kahanovich, a former soldier, who admitted he had helped to engineer expulsions from two Palestinian cities, Lod and Ramle, in 1948, shooting shells into a mosque where people had sought sanctuary. He and other soldiers then executed refugees as they fled.

“Sometimes we had to shoot one or two, and then the rest got the message and left on their own. You need to understand: if you didn’t destroy the Arab’s home, he will always want to come back. When there is no home, no village, there is nowhere to return,” he told Yedioth Hakibbutz.

In addition, Israeli historian Tom Segev publicised in March the minutes of a cabinet meeting from September 1948, a few weeks before Iqrit was captured.

According to the transcript, part of which is redacted, Ben Gurion believed efforts to provoke a renewal of hostilities could be used as a pretext to expel the 100,000 Palestinians still residing in the Galilee, designated part of the Arab state in an earlier United Nations partition plan.

“If war breaks out throughout the entire country, this would be advantageous for us as far as the Galilee is concerned because … we could empty the Galilee completely,” he told his ministers.

The statement comes close to suggesting that Ben Gurion planned the ethnic cleansing of Palestinians inside the expanded borders of the new state of Israel, a claim long and vehemently denied by Israeli officials.

That interpretation was supported the same month by Derek Penslar, the first professor of Israel studies at Oxford University, who told Britain’s Jewish Chronicle newspaper that Israel had committed “ethnic cleansing” of the Palestinians during the nakba.

Back in Iqrit, Walaa Sbeit pointed to a cluster of houses in the distance, just visible over the border in Lebanon, a country hosting more than 400,000 Palestinians in its refugee camps.

The justice of the refugees’ cause should never have been in doubt, he said.

“It is long past the time when the world should have corrected the wrong that was done to us,” said Sbeit. “Now we are acting for ourselves.”

One Response to Palestine Reclaimed: A Return to The Hill-Top of Iqrit