Outmanoeuvred: Opposition ‘Gets It Wrong’ In Kuwait 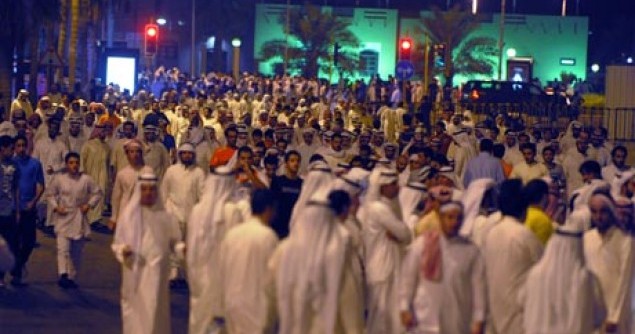 Some thoughts on Kuwait:

1) Had the number of protesters continued to be in the range of the first major protest back in October then I think we would have to look very carefully at Kuwait as being in a dangerous place. Yet this is not the case. Even in October despite claims from the opposition that there were over one hundred thousand people there I am yet to come across reliable evidence for this fact (though I am happy to be corrected).

2) Subsequent protests have – from what I can gather – been significantly smaller. The protest at Musallam Barrack’s arrest that was expected to be 100,000+ (and the opposition gave out tickets to try to prove this) but was much smaller. And so has every other protest since. The litmus test for this was the long planned protest on December 1. Again it appears that this was no where near 100,000.

3) Nevertheless, one cannot forget that Kuwait is a small country with around 1 million Kuwaitis. Thus several tens of thousands of protesters is still a significant number.

4) I am still of the opinion that the opposition have badly miscalculated. The Parliament will now be significantly less intransigent than its predecessors where the Islamist/Tribal opposition dominated and blocked anything and everything. There is a chance, therefore, that – shock, horror – Kuwait’s Parliament may actually get things done.

5) The Government now can undertake a relatively easy strategy to severely undercut a lot of the opposition support. a) Dole out some cash in the short term. b) Get something tangible done via the Parliament; show it is working and makes a difference to Kuwaitis. c) Give the newly appointed anti-corruption body some teeth and ideally a sacrificial lamb to show the elite is taking top level corruption seriously. None of this may be necessarily easy to do but it is surely easier now than it was before and nor is such a plan necessarily the best thing for Kuwait, but these are the options facing the Government if it is sensible from its perspective.

6) While such a plan would not undercut the hardcore tribal/Islamist elements it does not need to. Such a plan would take away broader support and sympathy leaving the opposition whittled down somewhat and their demonstrations getting ever smaller (as they already appear to be). This would place the opposition in an ever smaller minority, vociferously obstructing the continuation of Kuwaiti life and the normalization of Kuwaiti politics.

7) The opposition’s power has only ever been a blocking, negative power only now they have moved from intransigence in the Parliament to the streets (I don’t say this to denigrate the opposition  you can only play the hand you’ve been dealt). Without the legal scaffold of Parliament they are simply demonstrating and will need to ever more increase the intensity of their protests to force the Government to change. They run the real risk that after several months of this dragging on – of them protesting and disrupting and especially if the Parliament can make headway – the wider population will become increasingly disenchanted or even angry with their cause in the search for reconciliation or simply in the desire to get on with normal life.