Omanis, Protests, and The Right to Pursue Success 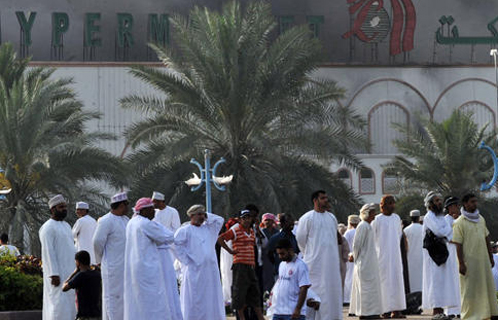 In stark — but unsurprising — contrast to the uprisings around the region, Oman’s protest did not call for the fall of its regime or even its ruler. About 200 Omanis marched peacefully on January 17, calling mainly for wage increases and a lower cost of living.

Though a precedent for Oman, the protests were easily dispersed by the police and dismissed as a euphoric reaction to — what was then — the recent resignation and fleeing of Tunisia’s president amid riots that were ignited by increasing food prices and deteriorating living conditions. A month later, approximately 350 Omanis protested in what would be referred to as the Green March.

Again, the protests were peaceful. It was only a week later, on February 26, that the protests turned violent with reports of disruption of business, stone pelting of security officers, looting and burning of public and private property. The security forces used tear gas and rubber bullets with at least one fatality confirmed by the health ministry, though unofficial estimates put the toll at six. Protests have since spread to several cities though less violent.

Oman’s Sultan Qaboos Bin Saeed has responded by promising to create 50,000 jobs (of which 10,000 would be law enforcement positions), raising minimum wages for Omanis in the private sector to 200 riyals (Dh1,900), establishing an unemployment benefits scheme of 150 riyals a month, ensuring the setting up of an independent financial authority and establishing a consumer protection authority, and a cabinet reshuffle.

Similar to the Saudi petitions delivered to King Abdullah Bin Abdul Aziz upon his return, a petition signed by nine Omanis, who described themselves as intellectuals and political activists, was received by Sultan Qaboos’s royal court. The court’s acknowledgement said Sultan Qaboos would review the petition favourably. The petition expressed the following:

Oman has a lot to be proud of; a balanced foreign policy that has allowed it to be viewed as a reliable partner of both the US and Iran. Oman has also outstripped all GCC states in nationalising its workforce, from taxicabs to banking and all the way to hospitality; a position trailed only by Bahrain.

Oman also has a decent tourism industry that can grow in folds, has concentrated efforts at mining and industrial development plans. But with its mountainous topography, less than one third of the UAE’s oil production but twice the number of citizens, reports of depleting production, overstated reserves and cognizantly not pursuing Dubai’s liberal trade and tourism model, Oman’s GDP per capita of $16,000 (Dh58,848) may be justifiable but is still lower than Bahrain’s; it jumps to $25,000 when considering its citizens only.

Even then, with no GINI index data (statistical representation of the relative distribution of a resource throughout a population available for GCC states), it is hard to measure the variance of GDP per capita, something the protests and the petition seem to insinuate.

Pursuing success
Oman is not Bahrain, but with 75 per cent of the population following the Ibadhi sect (a sect of Islam that is fairly distinct from Sunni and Shiite ones), the calls for sectarian favouritism or elitism were targeted towards the 8 per cent Shiite minority of whom many hold senior public office positions as well major business and banking interests.

It is in that light that the protests should be understood as not sectarian in their nature but socio-economic. In other words, Oman’s challenges and circumstances are closer to Saudi Arabia’s than those of Bahrain. Like the Saudis, the Omanis, those who have spoken and taken to the streets, at least, do not want to overthrow Sultan Qaboos, but rather introduce mechanisms that ensure that the average Omani has a better shot at pursuing success.

Oman has a historic opportunity to rewrite its social contract with its citizens, making them contributing partners as opposed to appeased followers. Omanis appreciate the great balancing strides (of modernising Oman while safeguarding its cultural identity) that Sultan Qaboos has taken in his 40-year reign.

They want long-term reforms which they can contribute to, not unsustainable social benefits that are spoon-fed to them by an ever-expanding welfare state. Governments that spoil their citizens into submission will realise that the economics of that social programme will catch up with them one day and perhaps by then their constituents would have become spoiled citizens with too high a tendency to strike at whim.