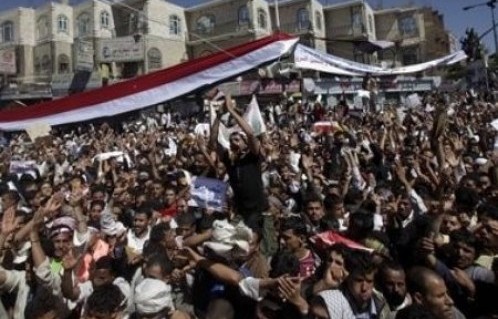 The Yemeni people are unrelenting in their demands for democracy. Millions continue to stage rallies across their country in a display of will that is proving the most robust out of all the Arab revolutions. The Yemenis face great challenges, however, including the political vacillation of their country’s opposition, and the US’ military and strategic interests in Yemen.

Al Jazeera described Abdul Hameed Abu Hatem as a mere ‘protester’. However, theman’s demands show a purity and genuineness that is consistent with the chants of millions of Yemenis from all over the country. “We are calling for freedom, justice, order and a civil government. We demand that the public income is used by the public and that people have equal job opportunities,” said Abu Hatem, during a pro-democracy rally in Sana’a attended by an estimated 250,000 Yemenis.

In order for such thoughtful demands to be met, a transparent political transition needs to take place. Ali Abdullah Saleh, Yemen’s president of 33 years is evidently unable to lead the country. He is currently suffering from physical injuries, and it seems that even if he were to recover, very few Yemenis currently trust in his ability to spearhead meaningful reforms.

Saleh’s leadership is now propped up by some tribal connections, his own security forces and the powerful Republican Guards commanded by his family members. Whole army units have already defected. Most notable among them are the troops of GeneralAli Mohsen al-Ahmar, which provide security to the protesting youth from attacks by regime forces. Many Yemenis have been killed and injured in such attacks.

In Saleh’s absence, the country’s affairs were entrusted to the vice president, Abdrabuh Mansur Hadi. However, all the signs point to the president’s son, Ahmad, as effectively being the one in command. The leader’s nephews, Tariq and Ammar, run President Saleh’s private guard and state security service respectively.

While such figures represent a tiny segment of the country’s population, their iron fist methods and brutal crackdowns continue to stand between the Yemeni people and their coveted democracy.  Another major obstacle is the indecisiveness of the country’s opposition, which co-existed with the ruling party in Yemen for years, and which seems incapable of operating in any way other than government cooption.

The Joint Meeting Parties (JMP) coalition had shifted positions repeatedly since the early days of the Yemeni revolution. At times it has opted to act independently from popular demands, agreeing to power-sharing arrangements with Saleh’s party. This has only served to prolong the status-quo rejected by most Yemenis.

The JMP are now threatening to unilaterally prepare a transitional ruling council without the General People’s Congress and the acting president, according to Xinhua news agency (July 1). This position may shift yet again, in light of the overlapping interests of many parties from both inside and outside Yemen.

The JMP’s unilateral undertaking aimed at forming a transitional ruling council would include “representatives from the protesters, separatist Southern Movement and Houthi-led Shiite rebels,” according to a Yemeni official, speaking in Xinhua. Such a political combination could be dangerous to the interests of influential outside parties led by the United States.

Yemen is one of the most important countries for the US’ ongoing wars. Its strategic location in the Arabian Peninsula, geographic immediacy to major waterways, and close proximity to Somalia (which has been under US military radar for years) makes it impossible to ignore for US military planners. Even during the time of peaceful protests throughout Yemen, the US carried out repeated strikes at suspected al-Qaida positions in the country. This reality is what had undermined the authority of Saleh in the eyes of his people in the first place. Furthermore, Saleh used the geostrategic weight of his country to gain US-western political and military backing.

A recent Brown University Study of the human and financial costs of US wars cited Yemen as fourth on the US lists of wars, following Iraq, Afghanistan and Pakistan, as reported by AFP on July 1. Chairman of the Joint Chiefs of Staff Adm. Mike Mullen, however, upgraded Yemen’s position into a country that is “rapidly becoming al-Qaida’s center of gravity,” according to a National Defense Magazine online report on June 30. Mullen was speaking at a press conference announcing this year’s so-called Failed States Index. Considering the corruption and oppression at home, and the determined foreign intervention, Yemen was ranked the 13th least stable country.

“While (al-Qaida) leadership still resides on the border between Afghanistan and Pakistan … the federate group that is in Yemen is an incredibly dangerous group that has taken full advantage of the chaos,” he said. By ‘chaos’, he must’ve meant the pro-democracy revolution, and the government’s remorseless crackdown on protesters. This chaos has also forced many tribes to provide their own security, as they clash with government forces and random militants. It is difficult to estimate the nature of al-Qaida’s power in Yemen, especially as the lines between al-Qaida militants, al-Qaida-inspired militants, and any militant at all (operating outside the central government’s command) is becoming so blurred.

Mullen suggested the maintenance of “military-to-military relations with such countries (as) key to creating stability,” according to the National Defense Magazine. However, the Yemeni military is divided, and the president’s security forces are still committed to fighting anti-US militants. They are also resolutely on the opposite side of the pro-democracy revolution. It is no wonder that the US is still backing the old order in Yemen.

The already impoverished country is now facing a possible economic meltdown – with continuous electricity disruptions for up to 20 hours a day in the capital, according to AP, (as cited in the Washington Post online on June 27.  The Yemeni people, however, continue to rally for freedom, democracy and civil rights. They wait for each Friday to descend upon city centers by the hundreds of thousands, conveying an extraordinarily clear message aimed at peace, stability and basic human rights.

“Hand in hand to achieve our goal,” chanted the very large crowd in Sana’a, all in one voice.