Why Obama has an Obligation to Confront Israel 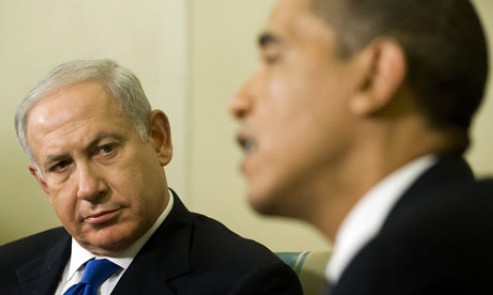 We’re promoting our new Goldstone book. It’s the abridged report with a number of fabulous essays accompanying it. Today I want to highlight the fine piece about the Goldstone Report and Congress by the former Washington state congressman Brian Baird.

The great thing about Brian Baird is that he seamlessly combines realism and a leftlib human-rights agenda. Say when he writes about trying to convince fellow congresspeople to support the report.

“[S]trategically it cannot make sense to have 600,000 young people under the age of fourteen 14 essentially living imprisoned in Gaza, unable to come or go for health, education, or economic activity, and through for absolutely no fault of their own. Set aside justice for a moment,it just doesn’t make sense strategically to do that because in the long run that’s going to come back to bite Israel and the United States U.S. as well.”

This is a good time to catch up with an amazing conversation that Baird had two months ago with Rabbis Brian Walt and Brant Rosen. It’s very long; and I’ve excerpted a lot of it below. The beauty of this conversation, too, is Baird’s marriage of morality and realist. He is chiefly moved by the plight of the Palestinians, and comes out for boycott at the end. He urges Obama to take his power, and be “the decider”, and condemn the settlement process, and he might even bring Congress with him. Aye, but Obama is hamstrung by the lobby. Baird’s analysis of the lobby runs through these comments. He says it’s the “financial influence” of the Israel lobby that is “paramount,” overturning an American interest in the Middle East. And then Baird urges other folks to try and take the lobby on, especially inside the Jewish community…Excerpts:

The horror of seeing Gaza. What a moving picture Baird, a clinical psychologist, paints of the room for kids to rehab at Al Quds hospital:

I visited burned-out Al Quds Hospital, which was especially moving. They had – the top floor of Al Quds had been this fantastically inviting therapeutic treatment facility for children. They had the kind of places with those plastic balls that kids can jump and dive in. There were paintings of Disney characters on the wall. There were all the PT and OT things that I know from my own work in rehab settings. And yet it had been hit by white phosphorous bombs that had burned the whole roof in, and an entire wing of the hospital had been destroyed. Ambulances were burned out and crushed in front of the hospital. It had really been – taken a devastating hit to a facility that any of us would have been previously pleased to have available as treatment for our kids, and it now was completely devastated…

There’s no question in my mind that what is happening there is collective punishment. And interestingly enough, some of the most pro-Israel people in the Congress I’ve talked to have said, “Well, yes, it is collective punishment.” And then I’ve pointed out to them that they’re accusing Israel of a war crime, and they actually – some of them said, “Well, we don’t think it is a war crime.” Well, it is, and it is for good reason, actually. The destruction of the civilian infrastructure, schools, hospitals, industrial capacity that had no relationship to war making – completely unjustified and unnecessary and, I think, ultimately, counterproductive. You have four to 600,000 young people in Gaza who – there’s no possible way they’re responsible for Hamas being in power. And yet they are bearing the brunt of much of the attack and effectively imprisoned…

Another shocker. Congress doesn’t know about the Saudi peace initiative of ’02.

If you ask any – most of my colleagues, frankly, have no idea that there is an Arab Peace Initiative, that the Arab world has largely said if they reconcile some of the issues with Israel, they would be willing to accept Israel’s right to exist and guarantee its existential security, et cetera. Most people don’t know that.

[T]here’s no – there could be no intellectually honest question that the role of campaign contributions from AIPAC and NORPAC and some of the other lobbying groups plays heavily in these issues. Some of the people who spoke on the Goldstone resolution, against the Goldstone Report and for the resolution condemning it – when – I thought to myself, why is that person offering this speech at this time? What is their interest in it? And then when one explored, you could say, “Oh, well, they’re running for Senate,” or “They’re doing this,” not necessarily that they had a large pro-Israel constituent per se, but they’re – in my belief, some of that at least had a relationship. We’re taught to not question the motives of our colleagues, and I respect that tradition. We certainly never do it on the floor. But I will say that my experience and belief is that, for many people, financial concerns of campaign contributions have an impact in their voting decision…

Baird is a moral giant. He stands on the shoulders of Rachel Corrie. Here he is on the inhumanity of the blockade of Gaza.

I think the US should have run the blockade analogous to the Berlin Airlift and said, “Look, we are not going to put up with this.” Because the record shows clearly that if all we do is sign documents and exhort our Israeli friends to do something, either – even if it’s in the international law, we have minimal success. And I frankly was quite tired and fed up with people at the level of John Kerry and the Secretary of State of the United States being relegated to asking, “Please, please, can you let toothpaste and garbanzo beans and pasta in?” I thought – I felt it was disingenuous and an insult and manipulative to our country. And yet that’s where we were at. We were begging for lentils, for goodness sakes, to get in, instead of saying, “Look, this is unjust. It’s unlawful. And it’s in – it’s not in our best security interests or that of Israel. We need to make a change, and there will be consequences if you don’t change.”

Now here’s some more on the Israel lobby. Rabbi Rosen asks, why can’t Obama do diddly?

…Could the president just pick up the phone to Netanyahu tomorrow and say, “These settlements have to stop or else?”

Rabbi Brant Rosen: Or would he –

Rep. Brian Baird: He could.

Rabbi Brant Rosen: How could he go about doing that?

Rep. Brian Baird: He could. He might be – he could say, for example, “Or no US military sales.” He could say – there are a host of – and by the way, not everyone will agree with this. .. But the president truly could say, “We are not going to condone this.”

he’s the President. He’s the chief decider of foreign policy. He has a great deal of say over where USAID money goes or doesn’t go. And I think he should exercise that.

Rabbi Brian Walt: So then why doesn’t he do that? Again, the question is –

Rabbi Brant Rosen:…maybe I should have taken this in Civics way back when. But could the President pick up the phone tomorrow and say, “This has to happen, or else there will be consequences with future military aid.” Could he do that?

Rabbi Brant Rosen: Without being hamstrung by the Congress?

Rep. Brian Baird: The Congress could try. And then you’d have – for example, he could – if the Congress issued some kind of legislative mandate that money go a certain way, he could veto that, and they’d have to override the veto. But he could then come to the American people and say, “Here’s why it’s not in our national interest to see this happen.” He might lose that. But, you know, that’s why you’re the President…

Rabbi Brian Walt: Well, but he’s – then you’re asking – then he – from what I understand from – you tell me if I’m wrong. If it goes to that, we’re then talking about the President of the United States going head to head with the Israel lobby and with all those who oppose any pressure like that on Israel. I –

Rep. Brian Baird: Exactly. But, you know, we take an oath to uphold and defend the Constitution of the United States of America against all enemies, foreign and domestic. And our first priority has to be United States security. That’s got to be our first priority. Our security is imperiled when we deviate from our fundamental values of justice and constitutional liberty, and when we fund entities that do that, as well. And that has tended to harm our security internationally.

Here’s Baird’s rage at the deal we offered Netanyahu last fall, and his call for boycott, and again, his moral giantness, speaking of Israel’s effort to destroy nonviolent protest:

we’re going to give you $2 billion worth of military hardware with which you can bomb the people of Gaza or somewhere else, and we’re going to promise that we’ll never, ever ask you again to stop building the settlements which you’re not supposed to build again, and we’re going to block anybody in an international forum that – where the logic of that is absolutely, completely escapes me….

Many of the people who are insisting – who are tying the – allegedly tying Netanyahu’s hands have explicitly as their goal a Greater Israel that extends to the West Bank. Antithetical. You – to negotiate with them. If that’s their conditions, you can’t get there. You have to just say – politics is about making tough decisions. Elections matter. And leadership matters. And you’re going to have to say, “That is not official US policy. We don’t believe it’s in your security interest. Most importantly, it’s not in our security interest. If you insist on going down that road, you will increasingly go down it alone, because we can’t abet that. And we have been for too long. You don’t have – you know, you don’t have to lose our support. But if you go down that road, just like a cocaine addict, I’m not going to pay for your coke anymore.”…

The challenge is, to be perfectly frank, the financial influence of AIPAC remains paramount and dominant…

And then I think they especially need to reach out to people on the Foreign Affairs Committee, because – and in the general body of Congress to say, “We will be there for you vocally to support you, as volunteers in campaigns, where appropriate financially, et cetera.” That voice has to get out….

As far as a boycott, I think the boycott makes sense. I think it has an impact. Or people – one of the things that’s been – some of the folks from New America said it very eloquently. I think it was Dan Levy, actually. He said, “You know, we’ve been telling the Palestinians for so long that they should engage in nonviolence.” In fact, they are. The film “Budrus” demonstrates that. …