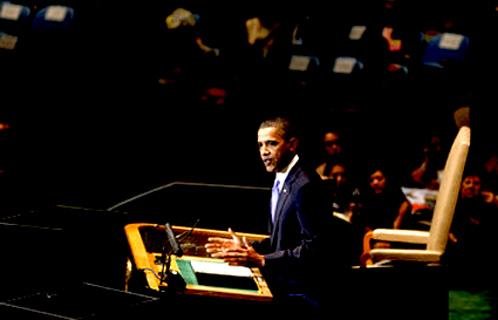 Brazen hypocrisy most often deeply damages the reputation, whether of a person or of a country.

President Barack Obama appears to have thought that he could go to the UN with a liberation of Libya and a further postponement of Palestinian rights to boast of, and that these stances would make him popular in the global south. But in fact he just looked inconsistent and hypocritical and self-interested.

The United States was not at the forefront of the changes sweeping the Middle East in the past year, and its instinct as a Great Power is to support the status quo. Thus, the Obama administration had almost nothing to say about Tunisia until after the populace had forced their president out. President Barack Obama appears to have been on the fence about what to do about Egypt after January 25, but his instinct certainly wasn’t to support the revolutionaries against their own government. Only about a week before it was all over did Obama join the chorus of those saying that Hosni Mubarak had to go.

It was Saudi Arabia, France and Britain who decided that Muammar Qaddafi would have to go. Obama reluctantly went along.

In the meantime, the US has done little but say tsk, tsk over the crushing of the street movement for reform in Bahrain. Geopolitics there trumped human rights concerns. The Sunni monarchy in Bahrain leases to the US the naval base that serves as HQ of the Fifth Fleet.

Now it turns out that the Obama administration even wants to more or less reward the Bahrain government for its repression by resuming arms sales to it. It is like a week-old widow deciding to go dancing.

But the biggest hypocrisy in Washington was reserved for the Palestinians, who labor under a repressive military occupation in the West Bank and are besieged and blockaded in Gaza. If anything they are far more deprived of basic political rights than the people in Egypt or Tunisia last year this time.

But the Obama administration’s response to the bid of the Palestinians for membership in the United Nations has been to seek to forestall it, to strong-arm Mahmoud “Abu Mazen” Abbas, and to twist the arms of countries like Nigeria and Gabon to get them to vote against it.

Obama’s argument, which simply echoes that of the Likud government in Israel is that the Palestine Authority is sidestepping the peace process by going to the UN. But that is a ridiculous proposition. There is no peace process. Obama failed to provide one. Thus, the Palestinians are wise to make an end run around the US in the region, since American policy toward the Palestinians has been since the time of Harry Truman to sacrifice them at the altar of US domestic politics (Truman pointed out that he had Jewish constituents, but no Palestinian ones to speak of). The Israel lobbies in the US are so powerful and successful that 81 congressmen spent some of their August recess in Israel!

The Palestinians are stateless. They have no citizenship in anything. That is why the Oslo process could be short-circuited by Binyamin Netanyahu and why Israel could renege at will from all the commitments it had made to the Palestinians. It is why Palestinian land can be usurped at will by Israeli squatters on the West Bank.

Obama made fine speeches about the Arab Spring, about the will of the people and the idealism and activism of the youth. He even did so with regard to countries such as Egypt, where the Mubarak dictatorship had faithfully served US purposes.

But apparently he feels that the Palestinians of Gaza, who are not even allowed by the Israelis to export their made goods, deserve only further occupation via blockade until such time as the far right Israeli government deigns unilaterally to revoke its punitive policies toward the stateless Palestinians, who were made stateless by the Zionist ethnic cleansing campaign of 1947-1948 (40% of the people of Gaza, their families expelled from their homes by Israelis, still live in refugee camps).

Obama gives a good speech and can invoke high ideals, but when, in Bahrain and Palestine, Washington pursues massive hypocrisy, it completely undermines the good will it might have otherwise gained by at least not standing in the way of change in Tunisia and Egypt, and by intervening to prevent a Qaddafi massacre in Libya.

Foreign policy victories are rare. Obama has squandered the positives by pandering to the right wing forces in Manama and Tel Aviv. This is change that Arab youth won’t be able to believe in.