No Triumphalism: ‘We Should Reach Out to Morsi Supporters’ 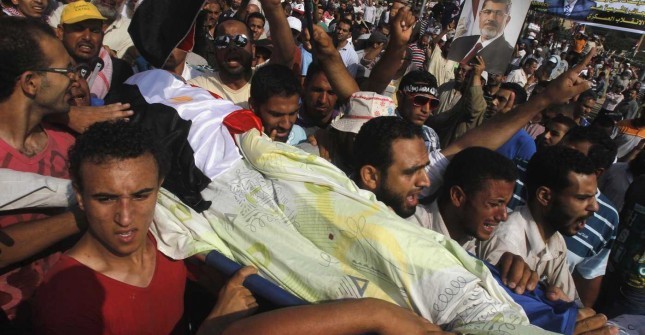 The celebratory atmosphere following the ousting of former Egyptian President Mohamed Morsi on 3 July devolved as arrests of leading politicians were made (some of whom were later released), four religious television stations were forcibly shut down and violent clashes led to the death of many pro and anti-Morsi demonstrators. The most recent incident left 51 pro-Morsi supporters and two soldiers dead, and hundreds injured.

I am a firm supporter of the recent protests and the ousting of Morsi, as were millions. I took to the streets each day of the mass protests. In my view, Morsi placed only Brotherhood supporters in key positions, ignored other segments of the society, disrespected the judiciary system on various occasions and disregarded the major demands of the people.

However, events in the aftermath of the protests are driving segments of Egyptian society further apart. What is needed now is empathy for those who disagree with Morsi’s ousting and reassurance that we do not want to oppress them under the guise of liberalism.

The right of pro-Morsi supporters to hold peaceful demonstrations should not be denied. At the same time, violence of any kind should not be tolerated and its perpetrators should be prosecuted.

Last week’s divisive events made me reflect on an interview I had with a woman who wears the niqab (face-veil) for an article I was writing on integration into Egyptian society. She was a strong supporter of political Islam.

She chose the coffee shop where the interview took place and only when I arrived did her choice make sense. Couples and revealing attire were clearly not allowed.

She explained that she chose this coffee shop because she feels accepted here, and doesn’t have to face stares from everyone as she walks in. Here, she doesn’t have to answer to the inquiring eyes that follow her when they see her sitting down with English books and a laptop.

Despite the fact that she had no particular political preference for either the Brotherhood or former president Morsi, she was delighted when he won the elections. She was delighted, she said, because under an Islamic leadership she finally felt like she fitted in. She yearned for an Islamic state, she said, because she wouldn’t feel like the odd one out; she would feel at home and in her element. This wasn’t about politics, rather it was about acceptance and belonging.

Fast forward a few months and this same interviewee publishes an avalanche of angry posts about the mass protests to topple Morsi and calls for military intervention. She was infuriated by the closing of religious channels and by the many arrests of Islamist leaders.

Messages from those opposing the uprising clearly communicate a deep fear not only of being alienated from society, but also of being persecuted and oppressed.

Therefore, instead of taking actions that cause alarm to peaceful protestors among Morsi’s supporters, those of us who supported the protests should be assuring supporters of political Islam that we are not out to get them.

We shouldn’t be taking television channels off-air or making generalisations. On the contrary, we should be focusing our energy on alleviating the tension between those who don’t support a role for religion in the state and those who do.

We shouldn’t be cutting off communication, but rather communicating messages of peace. We should be assuring supporters of a peaceful Islamic state that this is not a crackdown on Islam or on those who want a role for religion in government, and that this is not a war on religion. They should be able to rest assured that they are able to practice their religion the way they see fit even if an Islamic government is no longer in place.

This is not to say that we should apologize for the recent protests. To me, it was a beautiful, peaceful show of the will of the people. However, it’s time to clarify that beliefs and values are not subject to double standards, and that we support freedom of speech for all members of society — with the exception of hate speech.

I hope my words reach the woman I interviewed a few months back, as well as other supporters of Morsi’s regime.

Nadine el Sayed is a PhD candidate at the University of Westminster, a journalist in Egypt and managing editor of www.19TwentyThree.com.