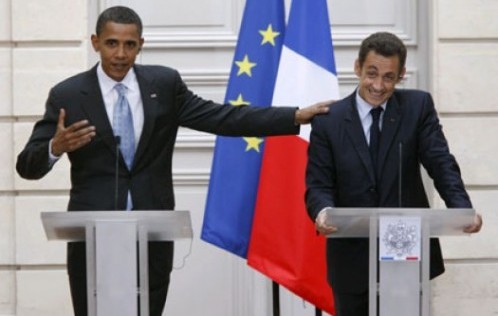 That’s a story? Really? He called the Israeli Premier a liar.

To his face? That’s brave.  No, while he was speaking to President Obama at the G20 Summit last week.  Obama was giving him a hard time about France’s support for Palestine’s admission to the UN cultural body UNESCO, a bid that the US opposed.

So he hit back with an attack on Netanhayu? ‘Attack the best form of defence’, ‘classic diversionary tactic’, you know the score.

This was surely a private conversation? It was meant to be.

There was a leak by some unnamed official? No, the two leaders didn’t realise that their microphones were live.

Aaaarggh – so it’s one of those cringe inducing, though highly entertaining, moments when politicians are found out? Wasn’t there a similar incident during the UK General Election? Yes, Prime Minister Gordon Brown was forced to deliver a face-to-face apology to a supporter of his party who had the temerity to ask him a few very reasonable question.  He labelled her ‘that dreadful woman’ and referred to the incident as ‘disastrous’ not realising that he was still wearing a radio microphone hooked up to a television van.

But you mentioned that in this particular instance Obama was hooked up too. I’ll bet he was careful not to say anything contentious?  His reply to Sarkozy was: “You’re fed up with him? I have to deal with him every day.”

Oooh. That could get him into trouble.  It already has – Rep Bob Turner, who took over the predominantly Jewish New York district vacated by Anthony Weiner, warned that Obama’s comments could be ‘dangerously misconstrued’. Congresswoman and 2012 GOP presidential hopeful Michele Bachmann demanded that the president apologize for his remarks.

But all this is a storm in an espresso cup compared to what Sarkozy is facing on a day-to-day front?  Yes, he has the little matter of the possible collapse of the eurozone economy to contend with.

That should be keeping him up at night.  Oh and he’s also just become a new Dad or ‘pere nouveau’ since his glamorous wife just gave birth to their first child.

Zut alors! This is probably not what the French Premier thought when confronted with the gaffe.  A diplomatic silence is being maintained by all parties on the incident.