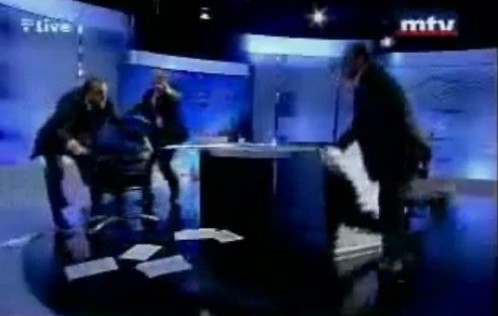 What’s the Story?  Two Lebanese politicians decided to debate with their fists on TV.

An innovative new cage fight reality show from LBC perhaps?  No, it was a late night talk show on MTV, actually.

And who were the pugilists? In the Red Corner was Fayez Shukr who represents the Baath Party which is closely affiliated with Syrian President Bashar Assad’s party of the same name.  In the Blue Corner was Mustafa Alloush, an opposition MP.

These set-to’s are usually preceded by some choice dialogue. Was that what happened here?  Not so sure if it was that choice but here goes:

‘Rocky’ Shukr:  “You don’t listen. I wish you would listen to what Assad says.”

‘Bonecrusher’ Alloush: “I heard him. I don’t believe a word he says.”

Shukr: “Who are you to believe or not believe him?”

And so began the ‘Beirut Blitz’? Well there was a bit of to and fro with insults and swearing before Shukr threw a glass of water over the talkshow host’s head at his rival.

Not exactly Queensberry Rules then.  I’m sure there’s no mention in boxing’s official rule book about opponents being allowed to throw chairs at each other.

That could be painful – anyone seriously injured? We don’t think so but it was difficult to tell as the channel quickly went to a commercial break

These on screen punch ups seem to be an emerging global trend. Wasn’t there one recently involving a Russian oligarch?  Yes Russian billionaire Alexander Lebedev cuffed property tycoon Sergei Polonsky, once again on a late night talk show, live on Russian TV in late September.  The video of ‘Moscow Mash’ went viral on the internet.

Speaking of which any chance of viewing ‘the Beirut Blitz’?  Be my guest:http://www.youtube.com/watch?v=d8zdbQIS_n8&sns=fb