Netanyahu: ‘Israel is Jewish. Agree Or Else’ 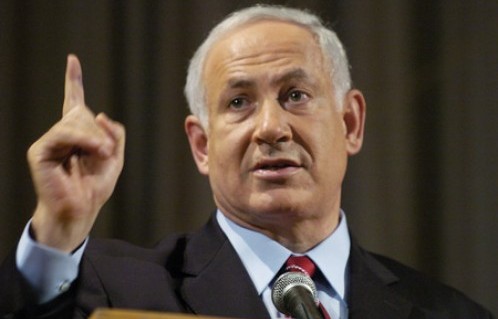 Israel’s relentless efforts to foil a Palestinian bid for statehood at the United Nations are linked to its increasingly intransigent demand that it be recognised as a Jewish state.

By denying the Palestinians the UN route while at the same time insisting as part of peace talks that they acknowledge Israel’s Jewish character, Israeli prime minister Benjamin Netanyahu is driving the final nail into the coffin of the peace process and the pursuit of the two-state solution.

Israel’s insistence on recognition of its Jewishness is a recent addition to its list of final-status issues to be resolved with the Palestinians in a negotiated settlement. But Netanyahu has rapidly forced it to the top of Israel’s agenda, making it all but a precondition for his entering talks.

After months of pressuring Israel to withdraw the requirement, the US administration of Barack Obama finally appears to be relenting. The White House is now reported to be insisting behind the scenes that the Palestinians recognise Israel’s Jewishness. The US has also promised to block the Palestinians if they continue to push for statehood at the UN.

The rest of the international community, represented by the Quartet — a body overseeing the peace process that comprises the US, the European Union, the UN and Russia — are reported to be following suit.

In a possible sign of the international consensus quickly forming behind Israel’s position, Spain last week recognised for the first time Israel as the “homeland of the Jewish people.” Israel is hoping that the decision by Madrid, traditionally regarded as supportive of the Palestinian cause, might lead other European states to follow suit.

As recently as last Saturday, Netanyahu declared that a speech denouncing Israel by Iranian cleric Ali Khamenei had added to his determination to insist on a Palestinian security guarantee recognising Israel’s Jewishness.

In line with his statement, he formally accepted a peace proposal Monday, put forward by the Quartet, attempting to dissuade Mahmoud Abbas from pursuing statehood through the UN. The US has promised to veto the Palestinian application if it cannot muster enough votes against it in the Security Council.

Despite a declaration that Netanyahu had accepted the Quartet terms “without preconditions”, the Israeli media reported that he had privately appended several demands, including recognition of Israel as a Jewish state and a Palestinian declaration of an end to the conflict. An Israeli minister described Israel’s position as “yes, but.”

In fact, the Quartet’s peace proposal had already been severely watered down because of Israel’s known intransigence on the issue of recognition of its Jewishness. Reuters reported last week that the Quartet had been forced to abandon a much more substantive formula for reviving peace talks because the recognition issue was considered insurmountable.

The final tepid statement released by the Quartet, similar to previous failed peace-making proposals, calls for preparatory talks between Israel and the Palestinians within a month leading to an agreement by the end of 2012.

Martin Indyk, a former US Assistant Secretary of State for Near Eastern Affairs, observed of the new diplomatic stalemate: “As well as being wrapped around the settlements freeze axle, we now seem to be wrapped around the ‘Jewish state’ axle too.”

In his speech to the UN last month, Netanyahu referred to the “Jewish state” 10 times, and concluded: “The core of the conflict has always been and unfortunately remains the refusal of the Palestinians to recognize a Jewish state in any border.”

Although Netanyahu and his officials have indicated that Palestinian recognition is a precondition for talks, Abbas has so far stood his ground. Last year he declared: “Israel can call itself whatever it wants. We don’t have to recognize those definitions.”

Palestinian objections meant that until recently Washington had worked hard to keep Israel’s demand off the table. But that appears to be changing.

In May, Obama became the first US president to formally endorse Israel’s definition as “a Jewish state and the homeland for the Jewish people.” Two months later, the New York Times revealed that the White House was secretly working “to resume negotiations on the basis of the 1967 lines and – for the first time in Mideast peacemaking – spell out international expectations that the Palestinians recognize Israel as a Jewish state”.

Israel’s demand for recognition of its Jewishness has become so entwined with the peace process, it is sometimes forgotten that it was first raised at the diplomatic level only four years ago.

The issue was not mentioned in the Oslo accords, signed in 1993, that effectively initiated the two-state process, or at Camp David, the 2000 summit that failed to reach an agreement on the establishment of a Palestinian state. At that point, the final-status issues were settlements, borders, refugees, and Jerusalem.

Analysts have tended to assume that the demand for recognition is simply a tactical ploy by Netanyahu to block talks with the Palestinians he does not want.

But it was in fact one of his predecessors, Ehud Olmert – widely regarded as committed to creating a Palestinian state, even if a very limited one – who first raised this condition as part of the peace process. Olmert introduced the demand at the Annapolis talks in late 2007, under US President George Bush’s stewardship.

It was a strange stipulation. Nation-states usually want recognition of their borders and territorial sovereignty, not their ethnic or religious character. That is precisely what the Palestinians did back in 1993 by recognising Israel in the Oslo accords.

So why did Olmert suddenly impose this new requirement? Neither Egypt nor Jordan, which signed earlier peace agreements with Israel, were asked to do the same.

The reason appears to be that, as Olmert believed he was moving closer to an agreement on partial statehood for the Palestinians, his officials advised that recognition would achieve important strategic gains.

First, under cover of a seemingly modest request, he would force the Palestinians to rule out any right of return to Israel for the millions of Palestinian refugees.

But Olmert was also persuaded that it would offer an important additional advantage related to the 1.5 million so-called “Israeli Arabs” – Palestinians who remained on their land in the 1948 war and have Israeli citizenship.

In recent years the Arab minority’s future in Israel has moved to the centre of Israeli discussions about the peace process. This community, a fifth of Israel’s population, is seen as a strategic threat in two ways.

Avigdor Lieberman, the far-right foreign minister, explained the first danger in a speech in August 2011, shortly after Abbas had again refused to recognise Israel as a Jewish state.

Lieberman said Abbas’ rejection revealed that “The real intention of the Palestinians is not to establish a state that will live in peace alongside Israel but rather the establishment of a state free of Jews in [the West Bank] and the hostile takeover of Israel from within.”

His meaning was clarified by the Jerusalem Post newspaper, which explained that Israeli officials were insisting on recognition to prevent the Arab minority making “irredentist” claims after a peace deal or forging political ties with the new Palestinian state next door.

Such moves would be ruled out in advance if the Palestinian leadership had acknowledged that Israel was a Jewish state.

The second threat relates to the problematic idea that Israel is both a Jewish and a democratic state. The Arab minority has contested this claim, becoming far more vocal over the past decade in demanding political reform. They want equality enshrined in law and Israel’s transformation into a what they call “state of all its citizens.”

If the Palestinian leaders in the occupied territories can be made to sign up to recognition of Israel’s Jewishness, they would give a stamp of approval to Israel taking whatever measures were necessary against the Arab minority to preserve the state’s Jewish character.

At a minimum that would require continuing to deny equality legislation and to preserve discriminatory immigration policies. The Law of Return, which allows only Jews automatic rights to immigrate, would remain inviolable, for example.

A bill asserting that Israel is a Jewish state is currently before the Israeli parliament. It would mean the state’s Jewishness would trump democratic principles should the two clash, and Jewish religious law would also become the “inspiration” for lawmakers and the courts. It would also revoke Arabic as an official language and validate the existing practice of almost-strict communal separation between Jews and Arabs.

But “defensive” measures to protect Israel’s Jewishness could also involve far more draconian moves, such as banning the minority’s political parties, downgrading the minority from citizens to guest workers, changing the borders to move densely populated Arab areas into a new Palestinian state, or even implementing full-scale expulsion.

At stake, point out Palestinian commentators, is also a moral issue that affects all Palestinians wherever they live.

Ahmad Samih Khalidi, a former Palestinian negotiator, explained the wider significance of recognising Israel as a Jewish state: “If these lands rightfully comprise the Jewish homeland, then the Arab presence there becomes historically aberrant and contingent; the Palestinians effectively become historic interlopers and trespassers – a transient presence on someone else’s national soil.

3 Responses to Netanyahu: ‘Israel is Jewish. Agree Or Else’