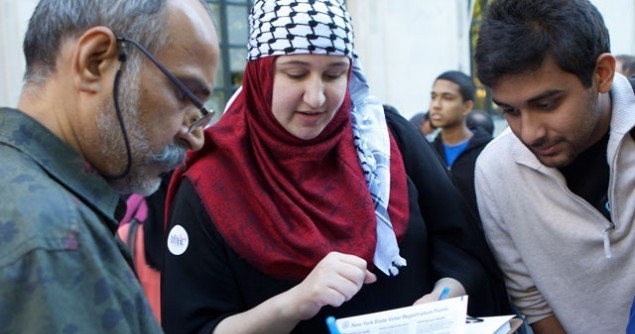 Post-election analysis suggests that though only a small proportion of American voters, the Muslim American vote mattered in the last election because Muslim Americans are strategically located in swing states. And in an unprecedented way during the 2012 elections, Muslim Americans – whether Democrat or Republican – applied the lessons of community organising to political mobilisation, in particular through social media.

#MuslimVote has enhanced the voice of younger Muslim American voters in ways that will shape voter habits for years to come. This was important as young voters are engaging with candidates and issues using these new, more dynamic mediums.

Muslim American social media users followed the African American and Arab American use of hashtags and were part of a greater social media movement among minority voices in the United States. For example, the US, Black Entertainment Television channel created the hashtag #BETVote to capture voter information, encourage African Americans to vote and inform its audience of tactics that could invalidate a vote – such as misplacing ballots or providing misinformation about the voting process.

Muslim Americans replicated these types of tactics on #MuslimVote. Similarly, Arab Americans used #YallahVote and #YallahChange to engage supporters of both political parties.

Like #BETVote and #YallahVote, #MuslimVote called attention to things like voter discontent with, or support for, specific policies. Thus it opened the door to online coalition building between groups advocating for minorities.

Coalition building serves as a key social and political tool to unite various minority groups around issues like voter mobilisation. The power of hashtags in social media is that anyone who believes in the cause may also participate and follow the issue.

Key information was shared as a result of #MuslimVote. For example, Muslim American community leaders organised “Ride to Vote” campaigns which allowed those without access to cars or public transportation, or those with disabilities, to cast their ballots in the high-profile states of Virginia, Ohio, Florida and North Carolina.

Another information exchange initiative using #MuslimVote connected non-partisan and partisan groups that focused on voter education. This allowed the sharing of information such as polling locations and schedules, voter criteria, as well as the documents needed to register, with key candidate information and resources.

Other grassroots groups that facilitated Muslim American political engagement used #MuslimVote to update campaign field offices or professional associations about candidates visits to their areas. They also shared candidate press releases on policy issues, like budgets and tax policies, on a weekly basis.

In Washington, DC, “Muslims for Obama” established a formal connection with Organizing for America, the Democratic National Committee’s arm to engage communities on the ground, while leveraging its informal connections with other grassroots groups that promote civic engagement. This group crafted clever slogans, like “Get Your Souls to the Polls” and advertised #MuslimVote on Twitter, Facebook, and tumblr to draw a larger audience to the Twitter feed.

In 2016, #MuslimVote, through its power to create connections between other groups and stimulate conversations of mutual interest, is poised to emerge as a decisive voice in politics and facilitate more bi-partisan coalition building around Muslim American policy issues.

Mehrunisa Qayyum is an international development consultant and the Founder of PITAPOLICY Consulting.

One Response to #MuslimVote: The Hashtag That Changed U.S Politics