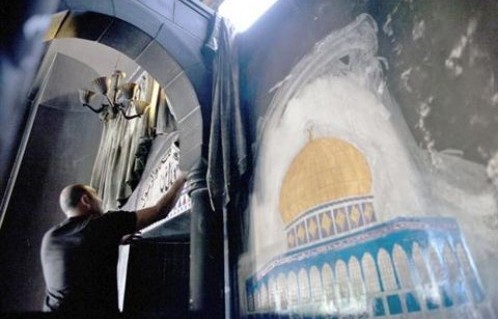 Jewish far-right groups responsible for a series of arson attacks on West Bank mosques over the past year broke dangerous ground last week when they turned their attention for the first time to holy places inside Israel. A mosque was torched, followed days later by an attack on Muslim and Christian graves.

In each case the settlers left their calling card – the words “Price tag”, indicating an act of revenge – scrawled on their handiwork.

None of the recent attacks against Palestinians has led to prosecutions. The so-called “Jewish division” of the Shin Bet secret police, which is charged with solving such crimes, is known to be more than half-hearted about pursuing investigations. Like many state institutions, including the army, its ranks are filled with settlers.

Paradoxically, a recent report from the Shin Bet warned that Jewish terror networks were not only flourishing in the hothouses of the West Bank’s settlements but growing bolder because of this impunity.

The desecration last week of a mosque in the Bedouin village of Tuba Zangariya, in northern Israel, should not therefore have been a surprise. It was followed at the weekend by the despoiling of two cemeteries in Jaffa, next to Tel Aviv.

The goal of the settler movement is to destroy any hope of a two-state solution, which is seen as limiting the Jewish people’s right to all of the land promised by God. Egged on by an ever larger number of rabbis, the hardliners in this camp are too blinkered to understand that Israeli leaders, including prime minister Benjamin Netanyahu, have already voided the peace process.

It was no coincidence that the torching of Tuba’s mosque came in the wake of an application last month to the United Nations by Mahmoud Abbas to recognise Palestinian statehood. The Palestinian Authority president raised the stakes, and so too did the settlers – by this time including Israel’s Palestinian Arab minority, a fifth of the population, in their “price tag”.

The Jewish extremists’ new strategy is apparently to stoke hatred and violence on both sides of the Green Line. As has been noted by Jafar Farah, the director of the Mossawa Center, an Arab Israeli advocacy group, the intention is to drain any residual support among Israeli Jews for a Palestinian state by persuading them that they are in an apocalyptic struggle for survival.

The target was carefully chosen in this regard. Tuba is one of a few fervently “loyal” Arab communities in Israel. While many Bedouin were expelled during the 1948 war that created Israel, the tribes of Tuba and Zangariya had an area next to Jewish communities set aside as a reward for fighting alongside Israel’s armed forces.

Deprived of jobs and facing the same discrimination suffered by the rest of the Arab minority, many young men still serve, like their grandfathers, in the Israeli army. After the mosque attack, a community leader boasted to an Israeli reporter: “We were among the founders of the state of Israel.”

But as news of the mosque’s desecration spread, enraged youth burnt government buildings, fired their army-issue rifles into the air and clashed with police. The settlers’ dream of setting the Galilee ablaze briefly looked like it might be realised.

Last Saturday, following the attack on Jaffa’s graves, a Molotov cocktail was thrown at a nearby synagogue in reprisal, further inflaming tensions.

Netanyahu was among those who denounced the mosque’s torching, but the logic of his approach to the peace process accords with the militant settlers’. He and his far-right foreign minister, Avigdor Lieberman, have created a climate in which the narrative of an epic Jewish battle for survival sounds plausible to many ordinary Israelis.

Like the settlers, Netanyahu opposes the emergence of a meaningful Palestinian state; he too implies that the world’s anger at Israel is fuelled by anti-Semitism; and he too wants to reopen the “1948 file”, a historical reckoning in which the Arab minority’s status as citizens would be reappraised.

And like the settlers, Netanyahu approaches peace with an iron fist that demands at best Palestinian capitulation, and suggests at worst a future in which a second wave of ethnic cleansing might be necessary to “finish the job” of 1948.

Celebrations in the occupied territories at Abbas’s UN move – a solitary act of defiance by the Palestinian leader – will quickly sour as it becomes clear that the US and Israel are in no mood to make concessions. The question is: what next? Despite the best efforts of Netanyahu and the hardline settlers to shape the answer, it may not be to their liking.

With no hope of statehood, Palestinians will have to devise their own new strategy for coping with the reality of an apartheid system in which the Jewish settlers become their permanent neighbours. Trapped in a single state ruled over by their occupiers, Palestinians are likely to draw on the experience of their cousins inside Israel.

Israel’s Arab community has been struggling with marginalisation and subordination within a Jewish state for decades. They have responded with a vocal campaign for equality that has antagonised the Jewish majority and resulted in a wave of anti-Arab legislation.

The two Palestinian communities, both confronting a harsher future under Israeli rule, have every incentive to develop a unified platform and struggle jointly – and more powerfully – against an overarching regime of Jewish privilege.

Their response could be tit-for-tat violence – that is certainly what the settlers would prefer. But a more effective and likely long-term strategy is a civil rights movement much like the ones that fought against Jim Crow laws in the US and against apartheid in South Africa. A simple rallying cry, voiced to a world exasperated by Israel’s self-destructive behaviour, would be “one person, one vote”.

Netanyahu and the settlers hope to subdue Palestinians with the establishment of a Greater Israel. But as the conflagration of mosques suggests, they may ultimately achieve the opposite. By reminding Palestinians on either side of the Green Line of their common fate, Israel may yet unleash a force too powerful to control. The price tag – this time demanded by Palestinians – will be high indeed for the Jewish supremacists.

A version of this article first appeared in the National, Abu Dhabi.

One Response to Mosques and Graves Attacked By Israeli Settlers