Morsi and The Brothers: My Role in Their Rise and Fall 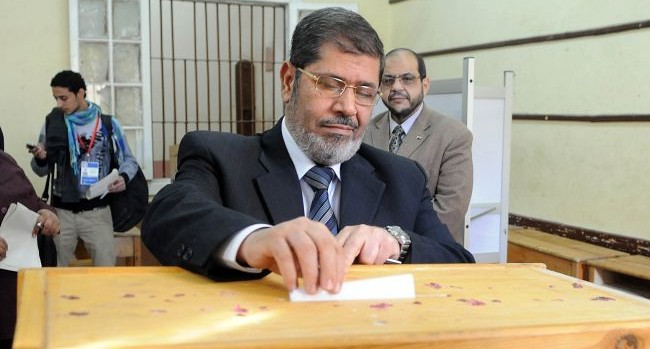 I voted for Morsi.  I later ‘repented’. But I initially did vote for Morsi.

During the presidential elections of 2012in Egypt, my friends and I made bets on who would be the 2 runner-ups and while most people put their money onMoussa and Fotouh, I had, next to my name, Morsi and Shafik. At the time, my friends said that this was such a bleak scenario that could never happen and that I was being too pessimistic.  When my bet turned out to be right on the mark, my friends then asked me, who they should vote for and I told them (along with many of my family members, except my dear husband who boycotted the run-off) to vote for Morsi.

For years, Egyptians lived with the notion that the Brothers were treated unfairly by successive regimes since the group came to existence in 1928.  Poorer, less educated Egyptians always referred to the Brothers as “the people of God” and believed that if they ruled Egypt, it would be a better place.  Under Mubarak, the Brothers opposed his government’s economic policies, labeled them “unjust to the needy”, and provided services to the poor. They supported the Palestinian cause and opposed the peace treaty with Israel, and cursed America and called it “the devil”. All of this, along with their association with religion and pious looks, made them “the people of God”, in the eyes of laymen. And “the people of God”, as one Egyptian told me while we stood in that long voting queue in May 2012, “would NEVER repeat the mistakes of Mubarak or SCAF“.

But once in power, the Brothers proved to be worse than Mubarak. They acted like a child who grew up in a home riddled with domestic violence. For years, that child watched his father (Mubarak & predecessors), abuse his mother (people of Egypt) and beat her up. The child hated his father and vowed that when he grows up, has a family and becomes a father himself, he will never do what the man he hated did.  But having never seen anything better or different, he grew up, had a family and turned into a worse version of his father. So much so, that by February 2013, you could hear Egyptians asking each other at cafés, in the metro station and even in business meetings “Has the armed forces given up on the country? Will they let the MB carry on, simply because the army got all the privileges it asked for in the MB constitution? Are they not going to rescue Egypt?”. Many families relocated to Western or GCC countries, thru immigration, asylum or business visas, and more were thinking of doing the same. Others, less fortunate, longed for “Mubarak’s days”, as they silently despaired about an uncertain future.

During the spring of 2013, if you went to any ministry or government office, employees there were quick to voice their grievances about the president and “his people and clan“. They would tell you immediately how an MB member who knows nothing about this ministry or how it works was parachuted into it, as an “advisor to the minister”, while many senior, competent and well-versed-on-the-job employees where sent to remote locations to get rid of.

If you went to a government office and asked to meet with the MB advisor, the resentful body language and facial expressions of everyone from the doorman to the office manager, was a clear indication of what laymen now thought of the “people of God”.

I remember a janitor saying: “Mubarak’s men were corrupt, but they kept it classy, and they looked after us. MBs are not just corrupt, they are also greedy and unclassy. They give religion a bad name.”

Then talk show hosts started widely discussing a court case about Morsi’s prison break in 2011, which was allegedly made possible by Hamas militia men.

Rumors were already raging in Egypt that Morsi was to give back Halayeb & Shalatin to Sudan, Sinai to the Palestinians, and sort of privatize the Suez Canal in favor of Turkey and Qatar. All of the above took the conversation to a whole new level. We now had a president who is deemed “unpatriotic” by his people. They do not trust him, nor do they believe that he is doing what is best for the country and it’s people. In fact, many wholeheartedly believed he was working against Egypt’s interests, at orders from “his superiors”, Shater and Badie (most people did not realize the depth of Ezzat‘s influence at the time). You see, Egyptians can live with an incompetent president for 30 years, but they cannot live with an unpatriotic one.

Then the “Tamarrod” movement came along. I often laughed at the name. To me, it meant that the person who came up with it couldn’t think beyond military terms. It’s an Arabic word that is usually used to describe “mutiny” among soldier ranks.  It seemed like the “deep state”

had gone and manufactured for itself an equivalent to movements like “April 6” & “Kefaya”. And Egyptians jumped at Tamarrod’s petitions, as a last chance to get rid of Morsi and his Brothers! You see, by then, presented with a choice between the “deep (corrupt) state” and the Brothers, Egyptians seemed to opt for what they perceived as the lesser of two evils, or rather the “evil they know well”; i.e. the “deep state”. Common wisdom, at the time, was that “in less than one year, the MB managed to do what Mubarak failed at for 30 years: de-mask and expose the brothers and make Egyptians hate them”.

But what was more laughable than the name “Tamarrod”, or perhaps in this case more pathetic, was the fact that with all the signs and the jokes trickling in, and despite them being first-hand witnesses to Mubarak’s fall, the Brothers refused to see the writing on the wall, to compromise or to even listen to their (now) friends in America and EU countries to be more inclusive in their rule of Egypt.

On July 2, a pro-MB acquaintance called me and asked “What do you think is going to happen?”, I said “It’s over. Morsi’s presidency is history.”

But “De-Nile” is not just a river in Egypt. So, without surprise, my caller’s answer was: “No, Morsi will come out of this crisis victorious and stronger than before. He will offer ‘them’ a coalition government, and will make amends and when the crisis ends, he will clean up military and police ranks down to “majors”, who are probably not as corrupt as their superiors, and can be loyal to him.”

“Too little, too late. This could have worked in January, we are in June. And there are no ‘them’, these are the people of Egypt, and they want Morsi and his ‘people and clan’ out. They want a ‘Ramadan without ‘Ikhwan‘”, I said.

I voted for Morsi, and I don’t feel that the military has wasted my vote by stepping in and rescuing Egypt from becoming Syria, Iraq, Afghanistan, or at best Iran.

I voted for Morsi, and as a mother of 2 children under the age of 6, I apologize to my children and to Egypt for this mistake.

I voted for Morsi, but I am grateful that the people of Egypt are now, finally, well-acquainted with the “people of God”!

Nashwa Hussien Aly is a proud Egyptian and mother of two Egyptian-American children.  Like many Egyptians, she voted in evey single election since the 2011 revolution.  Nashwa formerly worked as a Senior Political Specialist at the US Embassy in Cairo and currently works in public policy and government affairs at a leading technology company.