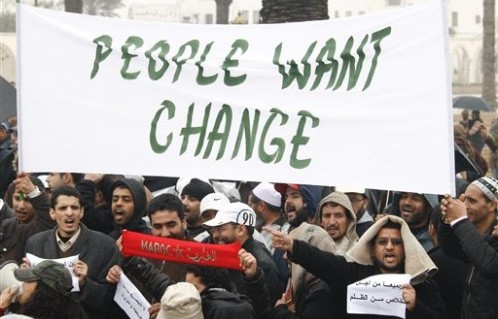 One of the clear differences between Morocco and other countries where protestors are calling for reforms is that the protests are peaceful. Although thousands of Moroccans nationwide held demonstrations last Friday, they were without violence. Here in Casablanca as in other parts of Morocco the demonstrators are calling for a radical overhaul of the country’s governance before a new constitution is unveiled in June by King Mohammed VI.

The march was organized by the Facebook youth movement Fevrier 20. The group said its members would not accept the present draft constitution because it was written by the king’s own people. It denounced his decision to refer the new constitution to a committee he appointed.

HRH King Mohammed announced last month he would give up some of his wide-scale powers and more importantly from the demonstrators’ point of view, make the judiciary independent.

Here in Casablanca, Fes, Rabat and Marrakech protesters demanded much more and openly rejected the moves.

“We are not believing these speeches anymore. We are tired of this,” said medical student Meryum, 17, who did not want to give her full name. “We are telling those who defend these speeches that we are sick of them. We only believe in real people today, like this, in taking part in real politics in Morocco. We are not going to stop until they hear us and get back our lost rights.”

An End to Corruption

Many believe that bribery in Morocco needs to be tackled before any reforms can actually take place. The central theme of the march – corruption – was reiterated by most groups at the rally.

“Corruption must end and we demand a progressive country,” said protestor Abdelfetah Bahjadi, “This is the people speaking to get our dignity back.”

Morocco was recently ranked the 89th most corrupt country in the world by In a recent report by the respected NGO Transparency International.

Corruption accounts for a loss of about 2% of Morocco’s GDP, officials have said. More important, it deters vital foreign direct investment from flowing into Morocco, they say.