More Kosovo than Iraq: How No-Fly Zones Can Succeed 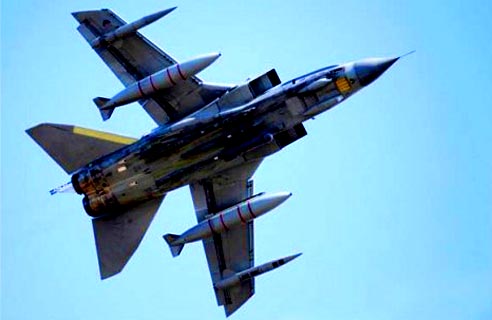 The United Nations no-fly zone over Libya is risky but it can have a good outcome under certain conditions. Above all, it should look more like Kosovo than like Iraq.

1. It should not be open-ended, but rather should have an expiration date. The no-fly zone is a response to a specific humanitarian crisis (the Qaddafi regime was firing tank and artillery shells at urban crowds protesting it). That crisis must not draw the UN allies into a years-long quagmire. (Such a situation developed in Iraq in the 1990s and contributed to the ultimate destruction of that country).

2. It should be a no-fly zone, not a war on the Qaddafi regime. Qaddafi tank columns should be interdicted from moving on Benghazi or Tobruk. But tanks just sitting around in Tripoli should not be targeted.

3. Once the no-fly zone is in place and Benghazi and points east are protected from reprisals, brokers should intervene to negotiate a diplomatic solution.

4. Officers who committed war crimes, as with ordering live fire on civilian crowds, must be prosecuted, but not everyone in the Libyan military should be tarred with that brush.

5. Amnesty might be offered to pro-Qaddafi officers and politicians provided they break with the dictator and send him into exile, as happened in Egypt and Tunisia. It is desirable that there be some continuity between the old regime and the new one, and that tribal factionalism and feuds and reprisals be avoided.

6. Countries opposed to or lukewarm toward the no-fly zone, but which are themselves democracies, such as India, Algeria and Russia, could be enlisted to meet with the officer corps in Tripoli and impress on them the need for a transition to parliamentary elections.

It is not impossible that there will be an outcome the world can live with, as happened in Bosnia and in Kosovo. In both places, local forces took the lead on the ground. Kosovo as a state originated in an externally enforced no fly zone.

That the world community has intervened in Libya but not in say, Yemen and Bahrain, has raised cries of hypocrisy. These charges are largely deserved. It is worth noting, however, that nowhere else in the Arab world where there have been widespread protests has the regime consistently responded with such massive brutality as in Libya. Yemen, with the sniper massacre of crowds on Friday, is moving in that direction, but Qaddafi has likely killed thousands since February 17, not just dozens.

From February 17, a peaceful protest movement broke out throughout Libya. Civilian crowds gathered without violence downtown, in Benghazi, Tobruk, Dirna, Zawiya, Zuara and even in the outskirts of Tripoli as in the working class town of Tajoura. City notables and military men in the east of the country formed a provisional government. Many diplomats declared for the provisional government, as did many officers and even cabinet members.

The Qaddafi regime responded with brutal violence to these non-violent protests. Early on, live fire was used against protesters in Tripoli itself. Last week, convoys of tanks rolled into Zawiya, supported by heavy artillery, firing on civilian crowds and on civilian apartment buildings. The tanks occupied the city center, and there are reports of a mass grave of the protesters. They were just protesters. They were easily defeated because they did not know, and most of them still do not know, how to handle a weapon. There were large numbers of self-inflicted gunshot wounds in the rebel ranks.

A reporter on the scene in Zawiya spoke of ‘large numbers of deaths’ and a ‘massacre.’

The Zawiya scenario was repeated, in Zuara to its west, and in Misrata to its east (Misrata, a city of 600,000 and Libya’s third largest, appears to have fallen to Qaddafi this weekend, with his tanks occupying the city center in a dreary repetition of the death and destruction at Zawiya earlier).

Libya began as a protest. Some of the protesters (apparently only a few thousand) were turned into armed rebels as they sought to defend themselves. Qaddafi responded to the protest movement by firing tank and artillery shells at the protesters and at infrastructure in the rebel cities. Many are without water and electricity, creating a humanitarian crisis.

NATO military forces flying in response to the UNSC resolution must seek to replicate the successes in Kosovo and not the failures in Iraq.