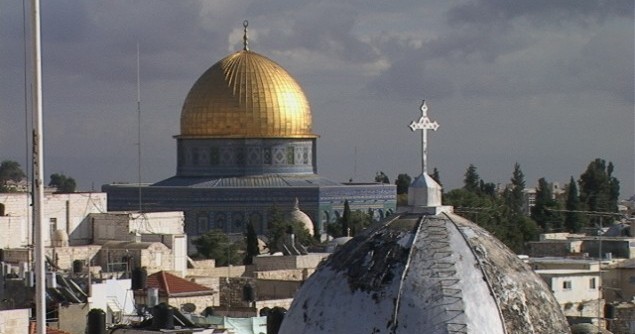 Mitt Romney is now the laughing stock of East Jerusalem. This morning when I bought minutes for my telephone, a clerk inputted them as he was chatting to a fellow customer. Then he looked at me and said, “I know– you think we are not culturally modified to do multitasking.” Another shopkeeper asked me if I had seen “His Excellency on his tour.”

I must point out another aspect of Romney’s insult. In his speech last Sunday here, he went out of his way to acknowledge the Jewish fast on the holiday of Tisha B’av.

But he said not a word about Ramadan.

This month Ramadan and its daily fasts dominate the public life of Palestinian Jerusalem. The rhythms of Ramadan are all around me: The cannon shot that announces the end of the fast each day; the ritual breaking of the fast, visible in every shop and on all the sidewalks as people cluster to eat or hold out bottles of water to one another; the holiday mood that goes on late into the night, with children staying up half the night making noise outside my hotel window in the Via Dolorosa because they don’t want to sleep through the morning meal… I am particularly struck by the degree to which everyone observes the fast, at least in public, even as the shops prepare the Ramadan pancakes and women fill bags with them. I make it a point not to eat in front of these people out of respect for their piety.

No matter what you think of religion, if you are a humanist, you have to admire Ramadan as the expression of a major civilization that organizes people’s lives in humble and at times beautiful ritual. And even if Romney was speaking to Israelis– well, many Israelis are also Muslims. Obama offers a statement about Ramadan every year.

When I pointed Romney’s omission out to the multitasking clerk today, he said with bitterness, “It was a speech made for an exclusively Jewish audience. If he had mentioned Ramadan, it would have hurt him.”

Obviously there is some truth in that statement. The visit was coordinated by the neoconservative propagandist Dan Senor, who was thankfully called out for his racism by NPR yesterday. Senor surely helped craft Romney’s foolish comments, and Senor could care less about Islamic culture.

Compare Romney’s omission with President Obama’s statement on Ramadan two weeks ago. An excerpt that captures some of my feeling here in Jerusalem, and that ties the holiday into human rights and politics:

For Muslims, Ramadan is a time of fasting, prayer, and reflection; a time of joy and celebration. It’s a time to cherish family, friends, and neighbors, and to help those in need.

This year, Ramadan holds special meaning for those citizens in the Middle East and North Africa who are courageously achieving democracy and self-determination and for those who are still struggling to achieve their universal rights. The United States continues to stand with those who seek the chance to decide their own destiny, to live free from fear and violence, and to practice their faith freely. Here in the United States, Ramadan reminds us that Islam is part of the fabric of our Nation…