Egypt: Where Were You on the Day When… 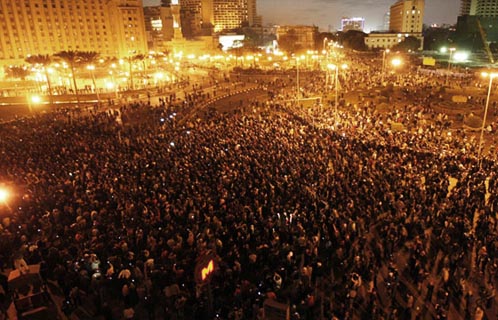 At the tender age of 28 years old, I can only really claim to remember two events in the ‘where were you when?’ category.

On 11th September 2001 I was about to go to work in the Rusacks Hotel in St. Andrews to confront tens of bewildered and worried Americans and (trivially, by comparison) when Diana died I had just returned from a holiday in Turkey.

Somewhat shamefully when the Berlin Wall came down, despite my mum’s protestations that ‘you’ll want to remember this moment’ I was just nagging her to go out as planned.

Perhaps the last week of January 2010 will become one of these synonymous events that reverberates for decades. It is certainly looking that way.

I am not an Egypt expert and do not claim to be so, hence my lack of posting on the topic (though this leaves me in the minority). I will just make a few notes:

– The notion of dominoes falling is ahistorical. We seem to have this inbuilt notion that an event in one country usually cascades around a region. This is simply not the historical record, especially so without any kind of supra-national involvement. However, it seems that the domino effect is actually coming to pass in Egypt. This will be an issue that intrigues Middle Eastern scholars for generations.

– Thus far, so far as I have seen, there has been essentially no Islamist involvement in this proto-Revolution. However, clearly the Muslim Brotherhood have a commanding organization network which will advantage them in the future.

– Al Jazeera’s role in this is interesting. At first they desperately avoided televising the burgeoning revolution. Clearly they were under some kind of orders not to exacerbate tensions by broadcasting events in Cairo and elsewhere. Indeed, there was some kind of accommodation reached by Al Jazeera/Qatar and Mubarak in recent months where many believe it was agreed that Al Jazeera’s coverage of Egypt would be toned down. Only when the elephant in the room reached epic proportions did they then cover it and since they have covered it extremely well.

– So where’s next? I’d not be sitting pretty if I were in Jordan and Yemen, that’s for sure. Saudi Arabia? I doubt very much that there are enough angry and unhappy Saudis willing to put in the necessary graft to instigate some kind of reform. Bahrain would be the only other of the GCC countries that I could at all see having issues but there too I’d be surprised if much came of it.

– One of my great fears about these revolutions is that people seemingly automatically expect things to get better. Don’t misunderstand me, I think it is a good thing that Tunisia and Egypt are in the process of seemingly throwing off their dictatorial yoke, but how exactly people think things will ipso facto get better I just don’t understand. Essentially, you can’t eat or pay the rent with democracy.