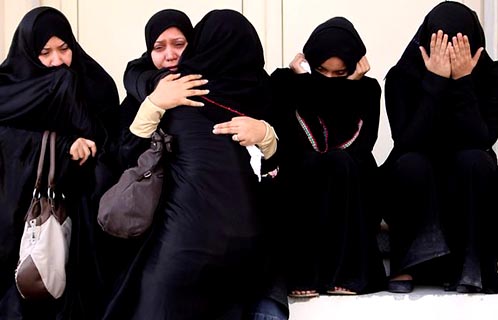 An AP photo captures the pain of Bahraini people

I write this from a holiday resort in South East Asia, far from the Bahrain I left hours before the tanks and armoured personnel carriers rolled across the Saudi-Bahrain causeway on the invitation of the Bahrain government. The holiday was planned many months ago – little did I realise at what critical point I would be leaving the country.

Since I left I have received a number of messages providing updates on the security situation. I have also heard from people on both sides of what is now an increasingly tall fence.

To give you a flavour, here is one of many messages within the expatriate network – this from a Canadian:

“I will keep this short and sweet – STAY INDOORS AND AWAY FROM YOUR WINDOWS!!!!

There is a lot of military activity at the moment all over the island including areas around Jawads, Al Osra and Al Jazeera supermarkets in addition to location around Bahrain Financial Harbour, Manama and pearl roundabout so it is best to STAY INDOORS TODAY!  There are also reports that roads leading to the airport are closed – for the latest updates please refer to the UK Embassy Facebook page: http://www.facebook.com/ukinbahrain

The UK Embassy has noted this past hour that there are problems with the mobile phone network so you might want to connect with people to give them your landline phone number so that you can stay connected.”

“Steve and Others: Check out the FaceBook Page – We Are Bahrain – to get a good picture from the Pro Government Supporters. The BBC keeps on quoting that 70% of the population are Shia and thus implying that they are all Anti Government. When will someone get it into their thick heads that the majority of the population love the present system. Only a few want to change. DEMOCRACY”

And from the opposition side, there is a PowerPoint presentation doing the rounds that accuses the government of using foreign nationals within the police force of acting as agents provocateurs by attacking schools and universities, in the hope that Sunnis will blame the Shia.  The presentation also claims that the same elements are carrying out acts of violence in the Shia villages. It denies claims by Bahrain TV that Shia are attacking Sunni mosques. It asserts that the 2002 constitution was “twisted without the approval of the nation”, and that opposition groups, which it claims include both Sunni and Shia, refuse to engage in dialogue with the government until they receive convincing guarantees of good faith. It ends by citing the misdeeds and failings of a number of ministers – some of whom have already been dismissed.

These are opinions, perceptions and reported personal experience. I report them here  – dispassionately I hope – to illustrate how the fences have become progressively higher over the past month.

Since the GCC forces arrived in Bahrain, the Iranian bogeyman has also surfaced with renewed vigour. The Iranians have described the CGG intervention as “interference”.  An editorial in Saudi Arabia’s Arab News described Iran’s attitude as hypocritical. Bahrain has recalled its ambassador from Tehran for “consultations”.

Here are a few thoughts on the current situation from my limited perspective:

In my opinion, Iranian influence in recent events is unlikely to have played a major part in the unrest. People I met in Pearl Roundabout last week gave me the impression that they have no allegiance to the Iranian regime. In fact, I got the feeling that if they had been Iranian they would have been with the green protesters after the 2009 Iranian elections.

However, the Iranians have never been afraid of taking advantage of an unstable situation. Logic suggests that offers of help and support from their end to those in the island who seek regime change might welcomed by a limited section of the opposition as a means to an end. One only has to look at the “support” they have provided elsewhere to understand the implications.

Once the GCC announced its $10 billion aid package to Bahrain – and a similar amount to Oman – it would be inconceivable that there were not conditions attached. Those conditions may well have related to limits in the scope of the reforms which the government is contemplating. To put it bluntly, the Saudis and their allies in the GCC  would never write a blank cheque to a new regime of unknown composition.

So by accepting the aid, it is conceivable that the Bahrain government has also reduced its room to manoeuvre.  And by doing so it may have made the GCC intervention inevitable given certain trigger events.

As to those trigger events, the government will have seen blockages of main highways as the point at which protest transforms into insurrection. Until that point, there had been a number of demonstrations targeted at specific areas.  After the initial violence in February, the government had accepted the permanent occupation of Pearl Roundabout, and had made no attempt by force to clear away the demonstrations in other locations. But once the protesters started to dictate  – most notably at the highway running past Pearl Roundabout – what traffic could go where, alarm bells will have rang.

There will also have been increasing pressure from powerful businessmen who will have been seeing the Bahraini economy sliding towards meltdown. I have no idea about the truth or otherwise of the protesters’ claims of provocation. But whatever led to the increasing breakdown of the rule of law, the negative impact on business will have accelerated. Business owners, large and small, will be afraid that they are facing ruin.

So where do things go from here?

I wrote a few weeks ago about parallels between Bahrain in 2011 and Northern Ireland in 1969. Hopefully things have not got to the point where some elements within the protesters feel that they have to hunker down for a long campaign of violence and insurrection.

Bahrain is a much smaller country than Northern Ireland – it would be much harder for opponents of the regime to wage such a campaign. Over the hills and farmland of Northern Ireland, and in the streets of Londonderry and Belfast, it was possible for the IRA and the protestant militia to wage war for thirty years. Not so easy in Bahrain.

If the process of dialogue continues despite the restrictions of the State of Emergency, and results in real change that satisfies most interests, then all is not lost.

However, it is hard to conceive that any compromise will emerge that does not maintain the ruling family in a position of power acceptable to Bahrain’s neighbours. However, it is possible to imagine a new constitution that provides greater political power to parliament, addresses long-standing grievances and yet gives the King the ultimate power of veto. Such constitutional devices exist elsewhere. For example, the US president can veto any legislation presented to him by Congress. True, he is elected by the people of America every four years, and King Hamad is a hereditary monarch.

But a constitution in which there are checks and balances that secure the rule of law and prevent abuses of political and economic power while preserving the position of the hereditary monarchy must be an attainable goal.

But no settlement is likely to erase from the public memory the deaths and injuries caused in the recent confrontations. Forgiveness may be forthcoming, but people have long memories, especially in a region where events in Makkah and Madinah – and in Karbala – one and a half millennia ago remain fresh in the common conscious.

So agreement must come quickly, before further events can be added to the future folk memory.

I have many friends in Bahrain. I do not wish to see them killed, wounded or bearing fresh scars of  hatred.

Addendum: Minutes after I posted the previous piece, I went to the BBC website and learned about the crackdown. It changes nothing that I wrote. Whatever the justification for the clearance of Pearl Roundabout, it is bound to polarise opinion even further, and intensify emotions.

The situation just got even more critical. I can only wish everyone in Bahrain a safe passage through this crisis.