No Big Sleep for the MidEast’s Remaining Thugs 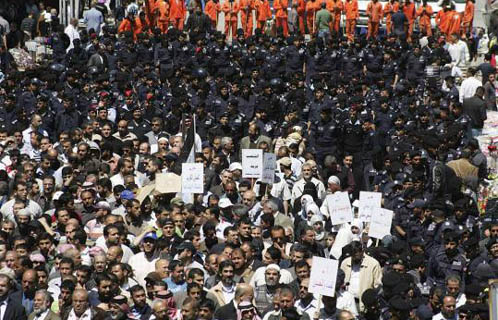 Now that the Arab revolt is slamming hard into Bashar al-Assad’s Baath Party in Syria, no Mideast or North African dictator will likely be able to sleep without first consuming copious amounts of booze and possibly pills.

If neither Assad nor Libya’s Moammar Khadafy — the two most ruthlessly repressive tyrants in the Arab world — is safe from his people’s wrath, no Mideast despot is safe.

On the other hand, there are yesterday’s reports of a massacre by Khadafy’s forces in Misrata, and the news of Assad’s own crackdown: The revolutionary wave isn’t yet powerful enough to wash away the worst thugs. And hopes are even dimmer in (mostly non-Arab) Iran.

Which means that the region’s most serious threats to our interests — and to Mideast peace — remain. Israel and America are still heading toward a confrontation with the axis of terror that includes the Syrian and Iranian regimes as well as Hamas in Gaza and Hezbollah in Lebanon.

At least NATO is busy patrolling the skies over Libya. But the Arab League pretends there’s nothing to see in Damascus as Assad warns darkly of Jewish plots, guns down demonstrators with live ammunition and takes organizers from their homes in the night, throwing them into dungeons.

And the Iranian regime looks as strong as ever. Millions of demonstrators have been trying to bring down the government for almost two years now, but they appear no more likely to prevail today than they did when they started. If Green Movement leaders don’t take up arms as Libya’s rebels have, and if the Revolutionary Guard remains loyal to President Mahmoud Ahmadinejad and Supreme Guide Ali Khamenei, Iran may well be immune from internally-driven regime-change for now.

It’s remotely possible that the Gaza Strip Palestinians will temporarily forget about Israel and remove the Hamas entity that so cruelly governs them, but there’s no chance at all that nonviolent protests or even an armed rebellion will eject Hezbollah from Lebanon.

Hezbollah isn’t the government, it’s a terrorist army, and it controls Lebanon from the shadows, where demonstrations can’t reach it. Lebanon has produced more mass demonstrations than any Arab country by far, and has been producing them since 2005. But guerrillas in hardened bunkers who can’t wait to go to heaven after impaling themselves on the Zionist Entity don’t care two figs what protesters in Beirut, or even ostensible government ministers, have to say.