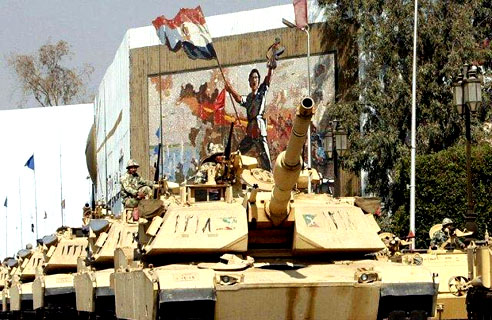 Not what it needed? Unemployment and economic stagnation was one of the sparks of the Egyptian revolution. This will just make it more difficult and expensive to borrow to turn things around. That said, Egypt has other sources of funds if needed. The IMF has offered a $3bn stand-by arrangement, and Saudi Arabia is reported to have offered a package worth around $4bn.

So not a huge issue? It will simply exacerbate the issues that have given it a bad credit rating in the first place – a sclerotic economy, political chaos,  and, of course, the elephant in the room, the army.

The army? Aren’t they the ones keeping it all together? Yes, they are. But they are also the biggest forces for conservatism and the status quo in Egypt. And as we know the status quo for most people was not working.

Go on… The army and its generals have a vested interest in things not changing. It is estimated to control between 10% and one-third of the Egyptian economy, owns huge swathes of land, including Sharm El Sheikh, pays no corporate tax, its workers are conscripted and therefore cannot strike, buys public land on favorable terms and discloses nothing to Parliament or the public.

Unsurprisingly it is fiercely resistant to liberalisation of the economy, privatisation or transparency over its business dealings.

How was it allowed to amass that kind of control? Under Nasser the idea was strategic self-sufficiency, to be able to supply, feed and arm itself. It has since grown far beyond that capability, but if you were an unelected leader, would you take on the force that kept you in power?

So the country’s new leaders have a struggle ahead in freeing up the economy? It’s what the country needs, but it’s not clear who can take it on. The army have carefully removed pro reformists from positions of authority, and will no doubt be trying to pull the strings of any elections.

When are the elections? Parliamentary elections will be held this year. Presidential elections next year.

So it’s not looking good. The IMF expects real GDP growth to remain at an anaemic 1-2 percent annual rate this year and next, unemployment remains high. Moody’s expects Egypt’s budget deficit to rise above 10 percent of GDP in the current fiscal year. The people meanwhile are back on the streets – this time complaining about the army’s control and inaction.

Real change in Egypt needs to happen but it is not yet clear who, if anyone, can take on the vested interests to deliver it.