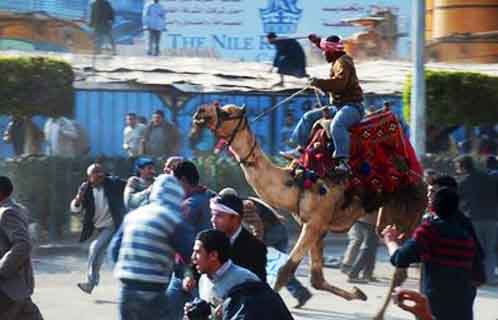 You can’t fool all the people all the time. The hawks of Egypt’s current regime should have learned this lesson, if not over the past 30 years, then over the past 11 days.

As the events leading to the Friday of Departure today escalated, the counter strategy of a government well-versed in the arts of repression and propaganda showed its ugly face, with no regard for the people of this country, for its economic future or its present security.

It first began with the criminal act of high treason to order the withdrawal of the entire police force, following a bloody day of confrontations between riot police and peaceful protesters. People who took to the streets spontaneously demanding regime change were beaten, arrested, dispersed with teargas and water cannon, shot at with rubber bullets and some 300 of them killed.

But still, they continued their relentless calls on President Mubarak to step down.

When they upped the ante, the disinformation war started reaching new lows. No sooner did the President make his speech last Tuesday pledging not to contest the next elections, then the pro-Mubarak/stability camp started to appear in counter protests.

Next: Black Wednesday. Thugs we’ve seen all too often before during elections storm Tahrir Square, trampling peaceful protesters with horses and camels, wielding knives, swords, machetes and weapons one doctor on the field said he’d never seen the likes of before.

Eleven people were killed and over 1,000 wounded in a medieval battle between those calling for immediate regime change and the thugs hired by mercenaries benefiting from the status quo. Molotov cocktails and fireballs were thrown from surrounding buildings, rocks were hurled at women and children and absolute chaos ensued.

Yet, not a single word from the regime until the following day, when new Prime Minister Ahmed Shafiq gave a press conference and made an “unprecedented” apology for the ruthless behavior of a deviant minority in an incident that will be “thoroughly investigated” and its perpetrators “severely punished”. (We’ve heard that before. Remember the ferry? The hundreds who died in train accidents?)

By Thursday morning, Egypt had become a completely different place.

All night the state media had been spewing disinformation about who was behind the attacks and the gunfire that was still heard the next morning. The scenarios were not only pernicious lies, but were tantamount to incitement of hatred, even murder. All of a sudden people were convinced that “foreign infiltrators” (read Hamas, Iran, western journalists) were captured in Tahrir Square and that the protesters calling for their legitimate right to choose their leader, were being manipulated by outsiders (read American and Israelis) and given $200 a day and a KFC meal to “ruin our country”. The traditional boogeyman, the Muslim Brotherhood, was also added to the mix, with false claims that the “banned group” was steering the protests and at the same time were the ones who attacked the protesters – claims that at best defy logic and reason.

The effect of this sedition was horrifying. On Thursday morning, Cairo was practically infested with self-appointed state-security officers, protectors of the nation. Overnight the state media had succeeded in creating a clear and present enemy: all foreigners, all those who associate with them, anyone holding a camera, anyone speaking a strange language, and, of course anyone heading to Tahrir Square. Citizen arrests were rampant and if it hadn’t been for military intervention, some of our own journalists would have been seriously hurt by lynch mobs, proud of catching an “enemy combatant”, a “spy” who is the reason behind our political crisis.

The deliberate spread of these ugly rumors led to stabbings and beatings of random foreigners who, no longer feeling safe or welcome in our “tourist haven” have left the country, adding to the economic toll of $310 million in losses a day. And yes, that means forget about tourism for the next six months at least. It didn’t matter how many families living off the informal sector in related industries will be destroyed as long as the regime still controls the message.

The arrogance of the current regime and its unconscionable propaganda machine has turned Egyptians into xenophobes, and the safe streets of Cairo into a sprawling jungle occupied by guerilla civilian militias.

The goal of such lies was to intimidate both foreign and local media and ironically just as the so-called new cabinet was promising the dawn of a new era on state television, thugs – some used to be ordinary Egyptians just one day ago – were storming the Hisham Mubarak Law Center, the offices of Al Jazeera, Al Hurra and video Cairo, confiscating equipment, not to mention the political kidnappings. About 30 human rights activists were arrested and the offices of the Muslim Brotherhood attacked just as the vice president invited the group for dialogue.  If the government had planned it this way, they couldn’t have done a better job. The war of attrition against the Egyptian people has begun.

Still, you can’t fool all the people all the time.

It only takes a trip to Tahrir Square to prove it.