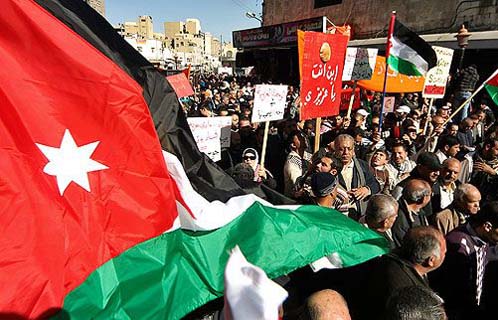 There is going to be a great deal of political analysis regarding HM King Abdullah’s appointment of Marouf Al Bakhit as the new Prime Minister of Jordan and the subsequent and relatively expected exit of Samir Rifai. When it comes to Jordan, such analysis is not only expect an hour after an appointment, but analysts are expected to make bold predictions as to the future, which is generally knowledge no one possess. I will make no such claims here.

Much will also be said of Bakhit himself given that he was Prime Minister only a few years ago. Appointed soon after the Amman bombings in late 2005, his main objective was to restore a sense of stability and security in a country that was shaken by a new reality of domestic terrorism. His exit was abrupt in late 2007 and quickly after one of the most fraudulent elections in modern Jordanian history. Next to those elections (municipal and parliamentary), the most controversial thing to emerge in those years was the so-called “Casino deal”, which was essentially a proposal to establish a casino on Jordanian soil – a deal that went sour very quickly the moment it went public and resulted in a great deal of backtracking on the government’s part, even paying out money to the casino’s foreign investors.

That said, there will be much talk that there is no chance of political reform or reform in general under Bakhit as he has already been tried and tested in the role of the Prime Minister. There will be talk that his security mindset will see a dramatic increase in security forces on the streets of Jordan, and a more hardliner approach. This is similar to the same kind of talk that emerged after the Amman bombings when it was expected that Bakhit, a military man, would essentially militarize the country – a move that did not transpire at all. There will also be talk of his status with the Muslim Brotherhood and their political arm, the Islamic Action Front.

A few things need to be realized with all of this in mind.

First, it is difficult for any serious political observer in the country (or outside it) to hang the 2007 elections on Bakhit. It is widely recognized that the Prime Ministry’s role had been massively eroded during an era where the Royal Court held an immense deal of executive power under Bassem Awadallah, but more importantly and significantly, the mukhabarat’s political interference under Mohammad Dahabi when it came to security and specifically the elections. The latter’s fear-mongering tactics resulted in the direct orchestration of what is considered to be the most fraudulent election in the country’s history. In political circles, a disgruntled Bakhit is said to have handed in his resignation the day after the parliamentary election in November 2007 (his official resignation was accepted five days after the election). In this era, talk of reform was nearly impossible to see materialize in the shadow of the mukhabarat.

Some three years later, the political dynamics have changed quite a bit. The executive was, whether people recognize it or not, fairly empowered during Nader Dahabi’s term (with his brother being the head of the mukhabarat), and maintained the status quo under Samir Rifai, a year of which saw a relative separation between the political sphere and the security apparatus, and likely to the latter entity’s dissatisfaction.

As for the Muslim Brotherhood. Bakhit’s relationship with the group has always been tense, but there’s no such thing as any one who comes out of the security apparatus in the country who has a “good” relationship with the group to begin with. Both parties are always suspicious of each other. The organization has already voiced its discontent over the appointment but this is also a group that generally won’t like any Prime Minister who is appointed and doesn’t come with a beard. Moreover, the group’s status has changed dramatically in the three years since Bakhit’s first term. They have relatively self-destructed during this time with constant party bickering over power balances between the hawks and the doves, and a self-induced exile from the political landscape of the politically-charged 2010 year. Their boycott of the election essentially stifled their own voice in the political spectrum of the Kingdom and recent protests have been a relative attempt to get back in the game, but of course it is always easier for the Muslim Brotherhood to organize a protest – their problem is with their sense of politicking.

Right now, the new Bakhit government is in a wait-and-see period. To what extent he will able to work with the current parliament and bring about some reforms are still up in the air. It is too soon to judge or predict, especially if those predictions are predicated on his last government’s performance.

But looking to the future, I will say this.

Bakhit’s government has probably been loaded with what is likely the most stringent of responsibilities in over a decade. Tunisia and Egypt have written a new chapter for the region and the dynamics of Middle Eastern politics have dramatically changed in the span of four weeks. The old strategies, which were already growing obsolete, are now officially dead and Jordan must forge a new path if the state hopes to survive in the coming years. The shelf-life of the appeasement policy is quickly expiring and the only long-lasting road to self-preservation is reform. Be it political, economic or social reform – the state must first reform itself. It must shift its traditional paradigm to a whole other realm, and emerge with the true and genuine belief that it must introduce dramatic changes with the approval of the people, if it hopes to sustain and maintain its grip on power.

An over-reliance on American funding has damaged the country’s ability to preserve balances. Recent pay raises to public sector in an effort to appease specific segments of the population, cannot be helped but be directly connected to a US pledge to increase its package to Jordan by a $100 million. We need to be weaned off this drug and get back on the road to self-sustainability. Trans-Jordanians, who have demonstrated their wrath in the past year to a great extent, are seeing an entire generation of farmers in search of government and army jobs, simply because opportunities in those sectors have increased due to foreign aid. The agricultural lands of 10 years ago are now brick, stone and cement of commercial buildings and residencies. That generation is dead. And now, in its stead, the Jordanian state is faced with a large constituency of public sector employees who are paid low wages and subsequently disgruntled at their financial status quo in an increasingly expensive marketplace.

Foreign aid should be going towards job creation in the private sector; fueling entrepreneurship and startups, creating proper infrastructure for foreign investment and decreasing bureaucracies – all of which help create better-paying jobs. Spending that money any where else is wasteful and a miscarriage of long-run sustainability.

Bakhit’s government is the mark of a country at a crossroad, it can either forge a new path towards true reform and genuine growth, or simply tread the same road that can only lead to one destination: it’s inevitable self-destruction. It can either adapt to the new region order, or suffer the consequences of falling behind. Reforms outlined in the National Agenda need to be revisited, revised and rejuvenated for the new decade. This government has more than just an ordinary opportunity that comes with a new page – it carries the responsibility of writing a new page in Jordanian history and changing the very course and direction of the entire nation. To squander that opportunity will not only be wasteful as it usually is with every new government – it will end in assured disaster this time.

This government, and the entire state, needs to re-approach and reconnect with the people. Civil society needs to be brought in to the folds. Public debate and input needs to emerge on a massive scale. Freedom of speech and expression need to be fueled and maintained permanently. Accountability and transparency needs to become the government’s new ethos; the corrupt need to be weeded out within an established system of accountability that does this on a consistent and permanent level – not for window-dressing and appeasement purposes. The veils of world politics are being brought down in the information age where transparency will not just play a starring role – it will be the entire show. The whole ballgame.

One Response to Jordan’s New Leadership: Will Jordanian’s Bakhit?