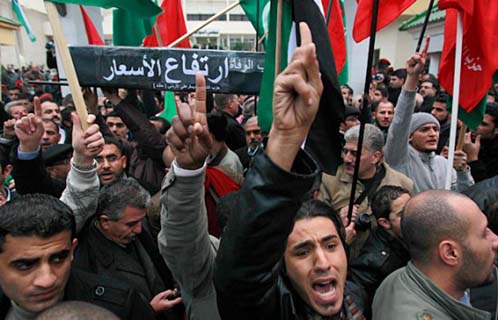 The Centre for Strategic Studies polled 1,950 Jordanians on the state of the country, and the results were quite interesting. I won’t go in to the gritty details but some of the numbers that stood out for me included one where 60% of those polled believe the country is going in the right direction and 25% believe the opposite is true. I don’t much stock in that particular question, whatever the result may be, given that it is usually too broad and yields too conventional a response. But the more interesting numbers had to do with the judicial system.

With court cases and rulings regarding corruption being the center piece of events in the past year, it is quite interesting to see how many Jordanians believe that our judicial system is not independent, and that such cases were politically-motivated or driven. That consensus does not bode well for the state of the rule of law in Jordan.

As for free speech and expression:

Around one-third (32 per cent) of the 1,950 respondents believed they could criticise the government in the open, a 13 per cent increase over last year’s figure. Regarding the best way to change government policy, 33 per cent of the respondents said demonstrations were the best option, 10 per cent favoured dialogue with the government and 7 per cent favoured using the media. Also, 78 per cent of the polled sample believe that public rallies are the most appropriate way to change a government should the need arise, although more than 90 per cent said resorting to violence to achieve this goal was not acceptable.

The poll also seems to point out the utter loss in confidence in the Lower House of Parliament as a legislative body, with a significant number believing that parliament is not combating corruption or really influencing public policy, or, for that matter, truly independent from the executive branch.

A slim majority of 52 per cent said the Lower House was carrying out its role in terms of monitoring the government and holding it accountable, drafting laws and supervising public expenditures. In terms of the House’s ability to combat corruption and influence public policy, however, the percentage saying they were capable of doing so fell to 48 per cent and 46 per cent, respectively. As for the Parliament’s independence from the executive authority, 45 per cent of respondents said it was, but only 41 per cent believe that the House was doing a good job in connecting with the people.

Conclusion? The majority seem to think protests are not the way to go, unless you want to overthrow the government that is (non-violently), and the majority also seem to think that neither the judicial branch nor the legislative branch are truly independent of the executive.