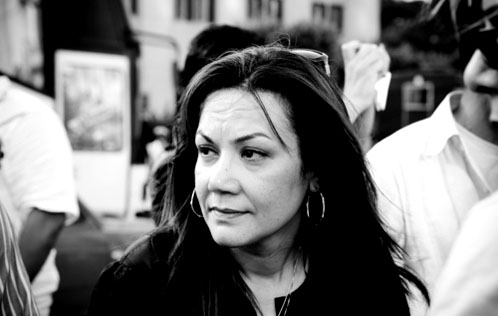 Since 25 January there has been an overwhelming amount of media coverage of women’s participation in protests across Egypt, including mothers who felt it was safe to bring their newborns to protest sites, young female students painting the faces of family members and revolutionaries, and female doctors taking care of the wounded overnight in freezing temperatures. Though the country is still under military rule, in which human rights are not adequately respected and a lack of political pressure persists, women are continuing to push the envelope and are making sure that their voices can still be heard in the political sphere.

One woman, former television news anchor, radio host and current activist Bothaina Kamel, is breaking new ground by becoming the first woman in Egypt to run for president, an effort other Egyptian women should build on. By doing so, she is raising the bar and giving young female politicians the opportunity to dream big.

Egyptian women did not see themselves merely as “women” in the field during the revolution. We were treated simply as fellow revolutionaries, patriots, leaders, and citizens. We found it odd that the international community was surprised to see us leading, chanting, organising meetings and engaging in the political process, demanding “freedom, dignity and social justice”. During the revolution, thousands of Egyptian women came to be seen as role models for their communities as lawyers, advocates for human rights, doctors, teachers, experts, and now politicians.

Kamel’s public stand for democracy and civil rights exemplifies women’s role in post-25 January Egypt. A woman who is practising what she preaches, she is not a women’s rights activist only, she is a fellow revolutionary who was detained on 20 November by police forces while joining the crowds at Tahrir calling for freedom from military rule.

It would be silly to think that she has a chance of winning the elections, but this is not what she is striving to prove. Kamel is an important symbol of what is possible, allowing for future generations of young women to dream of holding the country’s highest political office.

Kamel, like all Egyptian women, are fully aware of the obstacles and challenges that come from a society that is not entirely accustomed to strong female politicians and expects a “strong male” president to lead this critical transition. Though Egypt has a legacy of resilient female advocates, businesswomen, and leaders, Kamel exemplifies a new wave of female politicians that can understand what the street needs and strive to balance those demands with the political system.

The next parliamentary elections in November will show what the “Egyptian street” truly believes, whether Egyptians can learn to trust a woman in a leadership position, and whether ordinary women will trust female politicians to voice their needs and visions.

Before 25 January, many women’s rights had been legally protected for ordinary women, including freedom of expression, the right to work, personal status laws, quotas and many others. Now that Egyptian women are facing the risk of losing these important rights, their level of responsibility is high and the importance of raising awareness is a necessity. If women do not believe and stand up for their rights, no organisation or structure will do that on their behalf. Rights are no longer granted, which is a lesson to be learned from this revolution.

From a personal perspective, I believe young women have to do more than just demand rights and seats in political parties; they have to go out and fight for them. Women, as citizens, have to articulate their thoughts and visions to the public as they did during those 18 days in January.

It is not about winning in the upcoming parliamentary elections, but about nurturing high calibre female politicians, both young and old. This generation has raised the bar and awakened the true citizen within each Egyptian, but changing the stereotypical images of women will still require resilience, unity, and long-term planning. Kamel’s campaign exemplifies the beginning of this new path.

* Sally Zohney is a women’s rights advocate, story teller and member of SAWA Egypt. This article was written for the Common Ground News Service (CGNews).