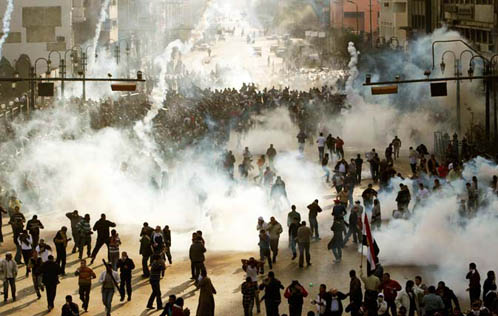 When two members of the Supreme Council of the Armed Forces (SCAF) in an international press conference claim, after a belated apology recognizing the martyrs of Nov. 19, that only teargas was used to disperse protesters, 41 of whom have died nationwide, you don’t know whether to laugh or cry.

The glaring video evidence to the contrary that has not only been going viral on YouTube but has been aired on every local and international TV channel shows a new and improved caliber of rifle-toting riot police in full gear aiming at stone-throwing protesters from rooftops firing birdshot or rubber bullets. Another notorious video showed an “honorable citizen” in the ranks of the central security forces carrying a soft drink bottle container filled with Molotov cocktails, which he was offering to other “honorable citizens.”

No apology will suffice to reverse the insult that such a blatantly false claim has dealt to the memory of the victims and to the hundreds who have lost eyes that were deliberately targeted, especially since the generals’ claims were not based on the results of any investigation or fact-finding commission. Quick to once more point the finger of blame on “unknown infiltrators,” the generals have betrayed an unjust bias to whatever version of the events perpetrated by the interior ministry, whose decision-makers were clearly on a payback revenge mission against any civilian who dares challenge them. And even if the 22 who were killed as a result of gunshot wounds were in fact not police victims, then doesn’t SCAF carry the political responsibility for the protection of peaceful protesters? Isn’t this exactly why ousted President Hosni Mubarak is on trial?

While the results of the “independent” investigation are almost a forgone conclusion, I wonder what the generals have to say about the brutality with which journalist Mona Eltahawy was handled on Wednesday night when she was arrested by CSF policemen and beaten so hard with sticks that her left arm and right hand were broken, not to mention the sexual harassment. Groped, prodded and assaulted, Eltahawy was also dragged by the hair and at some point blind-folded after being questioned by military intelligence in an ordeal that lasted 12 hours.

No sooner was Eltahawy released and quickly after the “supreme council” issued a statement encouraging “honorable citizens” to exercise the kind of vigilantism that has put many in similar situations over the past 10 months, another case of sexual assault took place in Tahrir, this time aimed against Caroline Sinz, a journalist with French TV channel France 3.

According to an interview she gave Agence France-Presse, Sinz and her cameraman were dragged towards Tahrir from the flashpoint Mohamed Mahmoud Street by a group of teenagers and adults.

“We were then assaulted by a crowd of men. I was beaten by a group of youngsters and adults who tore my clothes,” she told AFP, adding that she was then molested in a way that “would be considered rape.”

The ordeal lasted 45 minutes before she was rescued by a group of Egyptians.

It’s unlikely that any serious inquiry will be made into the hundreds of crimes committed in Egypt over the past week, why should we expect it if ten months on not a single officer implicated in the killing of protesters during the January uprising has been convicted for any crime. In fact most are not even detained pending investigations and have been set loose despite reports that they are intimidating the families of the victims, sometimes even forcing them to withdraw their lawsuits.

Despite popular belief, the current escalation has nothing to do with the advent of legislative elections. Those subscribing to the theory that the flare-up was contrived to abort the democratic process overlook the fact that the Tahrir clashes were triggered by the excessive violence exercised by police against a small group of peaceful protesters. It was the straw that broke the camel’s back. The frustration building up over the past months against SCAF’s lack of commitment to fundamental change that matches the aspirations of the people and whose first manifestation should have been a complete turnaround in how security treats the Egyptian citizen.

While it’s hard to imagine how the election process will be secured in Cairo’s Downtown area, it’s important that the process begin because this is the only way to guarantee that SCAF will not contrive any more excuses to stay in power and to make sure that the June deadline for presidential elections is not postponed.

SCAF’s chosen “revolutionary” Prime Minister, former PM Kamal El-Ganzoury now in his late 70s, is another slap in the face to those calling for real reform and can lead to more escalations if he doesn’t make a drastic decision in his first week in office, a decision that proves beyond a doubt that he is not being puppeteered by SCAF.

Once more Egypt’s future is on the line, but this time, the chant is: “The people and the people are one hand.”

As Eltahawy said, “There’s no other option, they’ve broken my hand.”