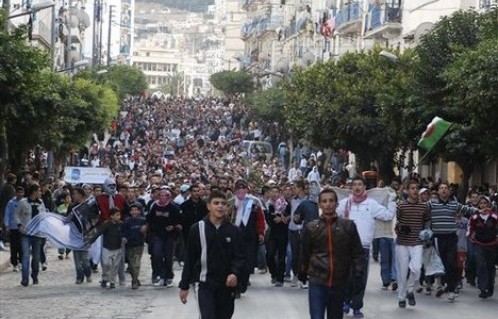 After Tunisia and Egypt, Algeria was the third Arab country that attempted to start a social and political revolution. However, the two marches of 12 and 19 February organised by the National Coordination for Change and Democracy (CNCD), demanding essentially a repeal of the state of emergency and a “change of system”, reportedly mobilised only 250 and 500 people respectively, according to Algérie Presse Service.

Due to these low numbers, some people might say that Algerians do not want to engage in revolution and are therefore not ready for change. In fact the situation is different: Algerians do want change, but they are afraid of a potential drift into unchecked anarchy and violence. And in any case the Algerian revolution is slowly finding its way via the structures of civil society.

For some years now Algeria has been mired in a deep economic, political and social crisis. As many as 9,700 riots, which resulted in the destruction of property, clashes and youth violence, were recorded in 2010 throughout the country. This relatively high figure reflects the deep frustration of the Algerian people, who are grappling with the high cost of living, massive unemployment, housing shortages and an across-the-board feeling of helplessness vis-à-vis the unknowns of their daily lives.

Judging from the fairly timid demonstrations of recent months, one can think it is glaringly obvious that the Algerian people have suppressed any hope for change. And the only alternative for its young people has consisted of going on rampages to destroy property as an expression of their discontent.

Violence, however, is not a solution. And in the meantime, a peaceful revolution is slowly happening.

There is a need for demonstrations that aim at regime change and an opening for a transition that would steer clear of past mistakes and avoid turning back the painful pages of the book of Algerian history.

After the revolution of 1954 against French colonialism which led to Algerian independence in 1962, a spate of popular upheavals about social problems, such as unemployment and housing shortages, took place in the 1980s, culminating on 5 October 1988 with large-scale riots and demonstrations that shook the regime. Unfortunately the move towards a more democratic system resulted in the so-called Black Decade, a decade of terrorism. The Islamic Salvation Front (FIS) party, which came out ahead in the 1991 general election, was stripped of its victory by a military coup. A civil war ensued, engulfing the whole country in blood and terror.

Nowadays Algerian society is numbed by fear. People prefer to ignore calls from the street that might drag them back into bloody warfare and irreversible chaos.

As a major force to be reckoned with, and representing 70 per cent of the population, Algerian youth now takes full advantage of social media, such as Facebook and Twitter, sends out calls for solidarity throughout the country to unite various forces and wages a peaceful fight for democracy. Youth associations, independent trade unions and women’s groups are committed to the principle of an organised movement for change.

These young people now realise that there is no future in disorganised calls for change. The only way forward is for them to accept existing civil society structures, bolster them, identify with them and continue on their march to freedom.

Many youth committees emerged as a result of the many strikes organised in the country, including committees of young unemployed workers and university student committees. They are all grouped under the umbrella of the National Coordination for Change and Democracy (CNCD), the movement that sparked off the demonstrations in Algiers. Currently the CNCD is planning a number of events in the various governorates of the country to inform and mobilise the population. For organisational purposes, the coordination has set up two operational committees, one dealing with arranging events, and the other organising publicity for and visibility of the events.

The overthrow of the Tunisian and Egyptian dictatorships came about as the result of a unique alliance: youth, the alternative media, solidarity and sheer obstinacy. In Algeria, the media enjoy relative freedom. The Internet was never censored. With this major asset civil society could channel the restlessness of young Algerians and help them organise a platform that could rally the rest of the Algerian people and develop a charter calling for three main claims: Democracy, Accountability and Equal Opportunity.