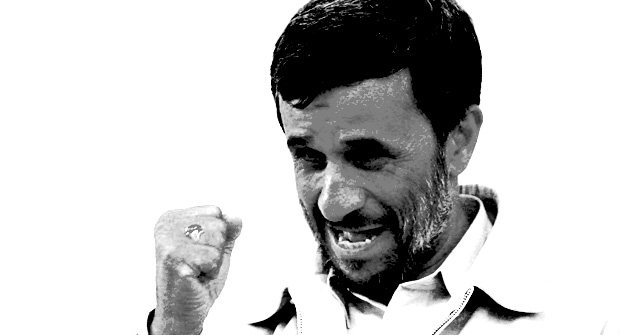 Iranian president Mahmoud Ahmadinejad, following in the footsteps of deposed Arab autocrats, is attempting to polish his tarnished image by associating himself with one of Iran’s greatest passions: soccer.

Mr. Ahmadinejad, whose economic policies are under attack despite punitive international sanctions and who has seen his power wane in advance of next year’s presidential election, this week paid a surprise visit to the Iranian national soccer team’s training camp in advance of its 2014 World Cup qualifier against South Korea. He went as far during the visit as shaking the hand of Ali Karimi, one of several players who wore green wrist bands during a 2009 international match in protest of alleged rigging of that year’s presidential election which returned Mr. Ahmadinejad to second term in office.

The visit, Mr. Ahmadinejad’s third in recent years, echoed attempts by deposed presidents Hosni Mubarak of Egypt, Zine El Abedine Ben Ali of Tunisia and Abdullah Saleh of Yemen to exploit soccer’s prestige in a bid to shore up their popularity in the years before their overthrow in 2011.

In a region in which the passion soccer evokes is only rivaled by that sparked by religion, Iran stands out. “I am not aware of anywhere else with the same passion,” said Carlos Queiroz in a recent interview with ESPN.

A passionate soccer player and fan, Mr. Ahmadinejad, who has at times micro managed the politics of the Football Federation of the Islamic Republic (FFIR) from behind the scenes, failed in earlier attempts to use soccer to boost his waning popularity. This time round, his attempt got an unexpected boost with world soccer body FIFA president Sepp Blatter’s announcement that he would be visiting Iran.

That however despite this week’s victory against South Korea may be wishful thinking with Mr. Ahmadinejad being his own worst enemy. Iranian soccer analysts believe that Iran’s national team is a shadow of the successful squad the country fielded at the 1998 World Cup as a result of corruption and political interference despite players earning more than their counterparts in Germany’s Bundesliga or the United States’ MLS.

“Fourteen years since Iranian football shined with its golden era in the 1998 World Cup Finals, the sport is steadily trending downhill with corruption in the transfer market and political interference among the main causes… To this day, club directors and even team managers are appointed by political affiliation rather than management skills.

There are few, if any, functional youth systems within the country. Iran’s national broadcaster continually finds spurious reasons to avoid broadcasting domestic fixtures, except for those featuring the government-funded Red and Blue teams of Tehran. On top of that, corruption in players’ transfer contracts is rife; from the league itself to the players and their agents, no party is free from blame and it will take years of healing to reform this broken system,” wrote Niloufar Momeni in a recent commentary on Goal.com.

To be sure, Iranian soccer has not been exempted from US, European and United Nations sanctions imposed on Iran because of its nuclear program. Iranian referees have encountered problems getting paid by the Asian Football Confederation (AFC) for work performed at international matches. The AFC last month found it could not transfer $1 million to the FFIR.

“There is no basis whatsoever for the American Government to black our money. We are a NGO and have nothing to do with politics. We have approached the AFC and several other organizations to persuade the Americans to release our money, which we are desperate to have, to no avail,” FFIR Ali Kafashian was quoted as saying last month.

A 2009 cable from the US embassy in Tehran disclosed by Wikileaks described how Mr. Ahmadinejad had at the time sought with limited success in advance of controversial presidential elections to associate himself with Iran’s national team in a bid to curry popular favor. Mr. Ahmadinejad is not a candidate in next year’s election but is believed to be attempting to position an associate.

“President Ahmadinejad has worked hard to associate himself with Iran’s beloved national team – ‘Team Melli’ – a tactic that backfired in March when he was accused of ‘jinxing’ the team, which suffered a last-minute defeat to Saudi Arabia just after Ahmadinejad entered the stadium. That event, coupled with an unexpected loss by the national wrestling team with Ahmadinejad in attendance earlier in the year, set off a firestorm of SMS messages and internet jokes holding the President personally responsible for the teams’ defeats,” the cable said.

Earlier, Mr. Ahmadinejad went as far as trying in 2006 to lift the ban on women watching soccer matches in Iranian stadiums, but in an early public disagreement was overruled by Supreme Leader Ali Khamenei.

Soccer represents for autocrats like Mr. Ahmadinejad a double-edged sword that both offers opportunity and constitutes a threat. The funeral last year of a famous Iranian soccer player in Tehran’s Azadi stadium turned into a mass protest against the government of Mr. Ahmadinejad.

Tens of thousands reportedly attended the ceremony for Nasser Hejazi, an internationally acclaimed defender and outspoken critic of Mr. Ahmadinejad. In a rare occurrence, some 1,000 women were allowed to be present during the ceremony.

Mourners chanted “Hejazi, you spoke in the name of the people” in a reference to Mr. Hejazi’s criticism of the Iranian president’s economic policies. Mr. Hejazi took Mr. Ahmadinejad in April to task for Iran’s gaping income differences and budgetary measures which hit the poorest the hardest. The mourners also shouted “Goodbye Hejazi, today the brave are mourning” and “Mr Nasser, rise up, your people can’t stand it anymore”.

Following in the footsteps of Arab autocrats confronted with mass protests, Iran last year suspended professional soccer matches temporarily to prevent celebrations of the 32nd anniversary of the Islamic revolution from turning into anti-government protests.