After the Flood: Rising Saudi Anger Getting Response 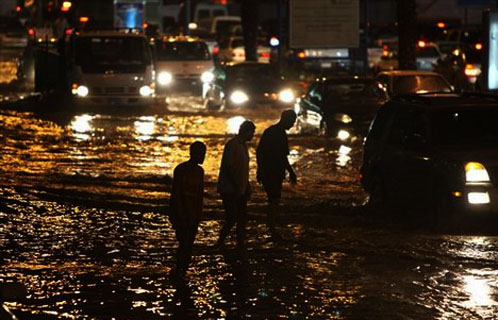 The recent floods in the port city of Jeddah, the second massive flooding in little more than a year, serves to remind Saudis what they already know: the city’s crumbling infrastructure is costing lives.

In November 2009, more than 100 people perished following torrential rains in Jeddah. In last week’s flood at least four people died. In the 2009 disaster, an estimated 10,785 buildings sustained damage and more than 10,000 vehicles were destroyed.

The inadequate government response to both disasters to save property and lives, and the clear evidence that the municipality’s incompetence played a role in the loss of life, continues to feed public anger that was once unthinkable in Saudi Arabia.

In the early days of the 2009 floods, Saudi authorities attempted to downplay the disaster. Authorities issued a news blackout and blamed victims for panicking. Yet Jeddah’s residents were shocked to see bodies floating in the street and instantly recorded those images to broadcast on YouTube and Facebook. The images led to outrage and demands of accountability for municipal authorities who failed to anticipate the destruction.

In an unprecedented move, the King Abdullah in May 2010 ordered the prosecution of about 50 Jeddah Municipal officials and businessmen on corruption and malfeasance charges stemming from managing construction projects and land use.

It was no longer business as usual for the Saudi government.

When last week’s flooding occurred, the Jeddah Municipality was marginally better prepared. It immediately sent in Civil Defense rescuers to pluck stranded motorists from car rooftops. The Saudi National Guard delivered food to Dar Hekma College, where female students were stranded for up to 24 hours.

However, the Facebook images, twitter messages and online videos continue to fuel Saudi anger and repeatedly raise the question as to why Saudi authorities learned nothing from the 2009 floods.

From an engineering standpoint, the 14-months gap between floods is no more than a blink of an eye when it comes to repairing 100 years of poor municipal planning. Saudi authorities also must develop checks and balances to see that proper construction funding is allocated to the right contractors.

In a region that is bone dry 51 weeks out the year, it’s somewhat understandable that Jeddah municipal authorities underestimated the need for properly constructed flood channels. But it does rain in Jeddah—usually in November through January—with short, but intense cloudbursts. Inevitably, streets flood and motorists are stranded, although not to the degree witnessed since 2009. This in of itself is enough evidence that rain must go somewhere. The municipality failed to address an obvious issue.

Jeddah is a city of 4 million. Construction of neighborhoods since the 1970s has been haphazard at best. Much of the city’s newer neighborhoods in the eastern part of the city are built on wadis, natural flood channels—that until buried under concrete—effectively handled rain runoff. Further, when the municipality constructed tunnels to accommodate the runoff, the drainage system was inadequate. In both the 2009 and 2011 incidents, water had no place to go but downhill from east to west wiping out everything in its path.

The flooding alone, however, doesn’t explain the massive loss of life and destruction of property, and therein lays the culpability of the municipality. The city has no sewage system, but relies on septic tanks. Large sections of roadways up to 10 feet long were ripped up and carried downstream in 2009. Streets caved in, creating holes up to 15 feet deep in nearly 200 locations.  Bridge support beams collapsed. Adding to the flood-related damage are Jeddah’s existing infrastructure problems of crumbling sidewalks, exposed street lamp wiring, rickety wooden pedestrian bridges and ubiquitous unfinished roadway construction sites.

These long simmering problems of shoddy construction practices served as a recipe for disaster when the floods struck. King Abdullah recognized this core issue when he called for the prosecution of city officials and contractors.

Jeddah is divided into districts and each district has an administrator who supervises the municipal services for his district. When the Saudi government announces its annual budget at the end of each year, the government allocates funds to each administrator to pay for services, construction projects and other expenditures.

Residents can instantly recognize which districts actually use their allocated funds for services. In north Jeddah, the Al-Arawdah, Al-Shati and Al-Azahra districts have regular garbage pickup, clean streets and well-maintained curbs and gutters. Road improvements are performed quickly and efficiency. No flooding has occurred there. Al-Rehab in east Jeddah is a moderately maintained district. However, Al-Azziyiah, which cuts a large swath in central Jeddah and is home primarily by low-income expatriate workers, has neighborhoods with overflowing garbage dumpsters that attracts vermin and feral cats. Where the money goes is anybody’s guess.

Following the 2009 floods, Ibrahim Kutubkhanah, deputy mayor of Jeddah, acknowledged that about 30 percent of the city has a drainage system and is equipped to handle just one inch of rain, not the three inches that fell. He also said that it would take to the end of 2012 to complete SR 1 million ($266.6 million) worth of existing drainage projects, with an additional SR 3 million ($800 million) needed to solve the city’s problems.

Criticism of the Saudi Municipality may be premature following last week’s deadly floods. The path to completing all drainage projects remains a long one. The real progress beyond the nuts and bolts of improving Jeddah’s infrastructure is the societal changes prompted by the floods.

According to Human Rights Watch, King Abdullah’s demand for accountability has prompted the Saudi courts to scrutinize local government conduct. Government jobs once protected for life are no longer safe. More than 20 municipal engineers resigned following the 2009 floods to avoid prosecution. Perhaps for the first time in modern Saudi history, a public scandal resulted in resignations and arrests. An estimated 500 lawyers stepped forward to defend the civil servants arrested on corruption charges. The effort was perhaps the first instance in which the private legal community was willing to stand up against the Saudi government to guarantee that defendants receive due process in court, and thus establishing rule of law in the Saudi judicial system.

Equally important to improving Jeddah’s drainage system is the fact that average Saudi citizens pushed their government to provide oversight to local spending, which is a change that ultimately will limit corruption.

One Response to After the Flood: Rising Saudi Anger Getting Response