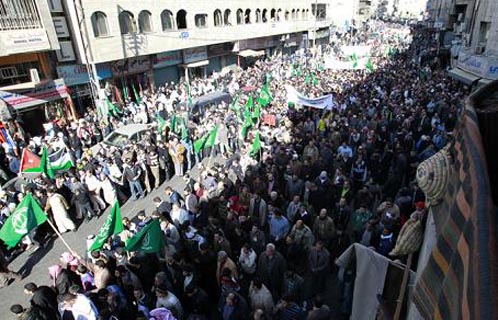 The “Top 6” Pieces of unfinished business:

1. Some 6000 protesters marched in Jordan on Friday. They said they wanted to transform the Jordanian monarchy into a European-style, constitutional monarchy and to return to an unamended 1952 constitution.

2. Some 100,000 Tunisians came out into the streets of Tunis on Friday to demand the resignation of caretaker prime minister Mohamed Ghannouchi. The interim government has set elections for mid-July, a key demand of protesters. It has also dissolved the former ruling party, the Rally for Constitutional Democracy to deny it advantages in the elections. But they don’t trust Ghannouchi, an insider in the regime of deposed president Zine El Abdidin Ben Ali, to oversee the lead-up to the elections. Ghannouchi is attempting to gain popularity by seizing the assets of Ben Ali’s corrupt inner circle, but so far has not been able to shake his reputation as a Ben Ali crony himself.

3. Tens of thousands of protesters came to Tahrir Square in dowtown Cairo, Egypt, on Friday, demanding the cancellation of the emergency laws that have suspended civil liberties in Egypt for 30 years. They also wanted Prime Minister Ahmad Shafiq, an appointee of deposed president Hosni Mubarak, to step down so there would be a clean break with the old regime. The Egyptian army prevented the crowd from going to the prime minister’s residence for their protest, and generally cracked down on the dissidents.

4. Some 200,000 protesters marched through Manama, the Bahrain capital, on Friday. They want Bahrain’s monarchy to become a constitutional monarchy, with guaranteed civil liberties. The also want the prime minister to be fired. The king has dismissed three other cabinet ministers.

5. Protesters in Aden, Yemen demanded that strongman Ali Abdullah Saleh step down. About 4 persons were killed and two dozen wounded as security forces over-reacted to the demonstration.

6. Overthrowing Muammar Qaddafi. The dictator’s security forces abandoned the working class district of Tajoura on Saturday after several days in which they tried just shooting down protesters to quell the demonstrations. They failed. If Qaddafi is losing significant portions of Tripoli itself, the writing is on the wall for him.

The protesters in Egypt and Tunisia had had only partial success, removing a strong man but wondering where genuine reform might have gone. Libyans still have not even removed the dictator, Qaddafi. And in Bahrain, Yemen and Jordan, popular demands for genuine economic and political reform have still largely fallen on deaf ears.