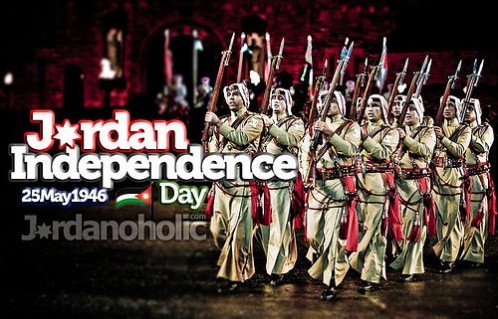 It’s an interesting time to be celebrating or honoring Jordan’s Independence Day today, and that probably has a lot more to do with the times we find ourselves stranded in. A region in disarray and regimes struggling to hold on for their life. But then again, when in the past 60 years has the region not been like that?

With all that has happened in Jordan these past few weeks and months I’ve mentally attempted to trace many of our problems down to their sources, and in the process, I’ve found myself losing hope more often than not. In university, I used to chastise Jordanian peers who were opposed to the idea of coming back to their country to contribute to its progress. It was an unacceptable attitude in my head. It was selfish. In my mind, we were those people who were fortunate enough to study abroad and had a duty to come back and benefit the country in one way or another. And even though most Jordanian peers I encountered felt this way, I came back anyway.

Living in and experiencing this country come hand in hand. And as time passed I discovered the people who hadn’t left the country to study or work, but existed in Jordan within a bubble – and so I chastised them. How can you live here and exist within the shelter of a bubble? It was a waste of a life. To surround yourself with family and friends and shun everything else is to exclude your role as a citizen. It was a neglect of duty.

Since then, I’ve learned a few things.

I’ve learned that if you want to keep your sanity while living in Jordan, existing within a personal bubble may be the best to do it. And I’ll emphasize the word “sanity” here, because those of us not interested in preserving it will have to exist without the protection of a bubble.

I’ve learned that, for the most part, the country is not interested in what you have to contribute to it. Whether it is the government or the people, no one is really interested. Everyone is self-driven and doesn’t really care what you have to offer unless they can benefit from it without having to sacrifice anything in return. Indeed, most people will even chastise you for having come back, and will offer you a sad and apologetic look. Meanwhile, those who come back and work for the government will, for the most part, find their education squandered on being offered medial low-paying dead-end jobs – unless of course your father was a former minister.

I’ve learned that we’re a country quietly at war with itself; struggling to find an identity. Our relationship with one another is largely passive aggressive; like a mother-in-law who isn’t crazy about her son’s wife but won’t show it outright, relying instead on snubbing her. I’ve learned that our history is a record stuck on reply – deliberately. And even thought over 60% of the population did not live through nor experience Black September, our political thought is inherited, and we have never really gotten over it. Times are different today, but the surface we’ve built and dubbed national unity, I’ve learned is superficial, flimsy and fragile. It is a layer of ice on a lake that could break due to the burden it bears. And I’ve learned that this broken record is our state’s favorite tune, offering it up to the public in subtle ways, but causing just enough discord to keep people suspicious of each other. To keep people in a constant state of passive aggressive behavior.

I’ve learned to expect less and less of my government to the point that there is really very little that can surprise me now. In fact, I will say that without a doubt, I have given up all hope when it comes to the government. While solutions to many of our problems are solely in the hands of the state, I believe that it now represents one of our biggest problems in itself, and its willingness to solve anything is absurd. It does however manage to put on a great show and at times, it has its lucid moments – its moments where something good actually slips by, perhaps accidentally, but nevertheless. But all in all, the words “progress” and “reform” and even “democracy” has come to mean nothing more to me than “window-dressing” and “superficiality”. If a country’s functioning and development is based on the macro and micro – I have abandoned faith in the macro.

I’ve learned that good citizenship is non-existent in Jordan. The population is taught to equate good citizenship with nationalism. Pop-nationalism at best. Flag-waving and slogan chanting nationalism that yields absolutely nothing of good for the country but wasted talent and energy. We cross the street at red lights, we throw garbage on the ground with ease, we feel no obligation to get involved in our own communities, and on and on and on. Our civics lessons in school are void of anything valuable for the country other than being ingrained with indoctrinating principles regarding God, Country and King. Our youth do not practice citizenship, but are encouraged to demonstrate nationalism, because it is the only outlet that allows them to demonstrate loyalty. And to the few activists that have attempted to reverse, dismantle and rewrite this equation by working heavily in local communities – I declare all my appreciation, support and respect to them, because they are likely having an impact on young minds in ways the state, the macro, has never even bothered to do.

I’ve learned that we are taught to dwell amongst the lowest common denominator in order to feel better ourselves. If Jordan is a country that has benefited, as some believe, on the suffering of others, in reality it has also been sustained by that same kind of suffering. Our educational system is a mess, but as long as it’s better than Iraq, we’re ok. Corruption is palpable, but as long as we’re doing better than Nigeria, it’s alright. Our standards of living are barely livable for most, but as long as we fair better than Egypt, we can’t complain. We shouldn’t complain. In fact, don’t criticize the country. And if you don’t like it, go live somewhere else…and this is the kind of mentally retarded opposition you can hear quite frequently from those who would prefer silence and consent over criticism and even progress. Those who benefit from the status quo have absolutely no desire to see it change.

I’ve learned that maneuvering through Amman specifically, is to navigate through ego-infested waters. Everyone is concerned with their name, their accomplishments and themselves. I don’t see much of that outside Amman, so part of me feels it has something to do with the urban lifestyles that have overtaken us.

I’ve learned that people think in absolutes. You are either with them or against them. You must pick a side and stick with it. You cannot dwell in the grey, nor can you practice that which makes us human – the ability to change your mind. There is little ground to compromise, and everyone tends to resort to their own comfort zones of beliefs and absolutes, fearing everything else. The more you approach, the further they dig in to their corner, the more absolute their resolve becomes. We could even want the same thing but as long as we disagree with each other on how to achieve it, we need to become enemies. We must insult, attack, beat, poke and annoy each other until one of us surrenders. And these days, to add to that mess of an equation, we must also question each others loyalty to the country.

Above all, I’ve learned that if you want to do something for the country, contribute to it, you need to live in a bubble. Not a superficial I-don’t-care-about-anything-but-myself kind of bubble – but an enclosed virtual or artificial space where you can work on doing something of value, but ignore everyone else; a “civic bubble” if you will. Ignore the government, the macro, the system, the status quo, the naysayers, and just about anything else. If you focus on doing something that can actually benefit the country, it is more than possible. It isn’t easy, but it’s very possible. But to do it well, and to retain your sense of sanity – you must construct that bubble and sustain it. Elements will always try to penetrate it, and will do so randomly and without warning, in the same way that journalists and editors get threatening phone calls from the security apparatus, but as long as you’re in the right you’ll be ok. But don’t give up the bubble. Bring people in to it, and expand it step by step, but don’t give it up. Let it engulf others, and let others contribute to it. Do not allow it to remain the same size and grow to be a comfort zone. Allow it to grow and consider everything else to be “the dark side”. Bring to it your education, your experience, your passions, your desires, your beliefs and your principles. Every now and then you’ll run in to people who have their own “civic bubbles” and like a Venn diagram of intersecting circles you’ll find you can expand exponentially via common ground.

If you’re reading this and thinking to yourself, gee, this is a pretty gloomy view of the landscape, I assure you, I’m trying to simply capture what I see through my lens. People are free to disagree with me and offer their own perspectives. But, in truth, I’ve actually seen this in action and the kind of people these civic bubbles tend to yield, the kind of good they’re able to achieve is extraordinary, and I’m beginning to believe that if more and more people head in that direction, it may actually have a tremendous impact on social development in this country. Because the government is just not going to be able to do it. Whether it is genuine about it or not, is not only besides the point – it’s no longer relevant. And that is perhaps the most beautiful thing about this – the equation no longer requires the government to be genuine, it exists despite it. Change has to come from people – from key people – from community organizers and activists. From opinion makers and journalists. From artists and engineers. From those who are bold enough to envision their own bubbles, and then grow them to fit the mold of a nation.

The best part about this is that it’s already happening – perhaps randomly and accidentally.

I think I’m just trying to put words to it.

3 Responses to Living in My Jordanian ‘Bubble’: Lessons Learned