‘Live Long and Prosper’: My Message to Region 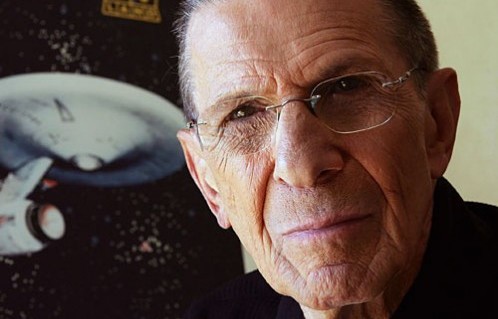 When I was a teenager, I told my dad I wanted to be an actor. In response, he gave me the only piece of advice he ever offered me–”Learn to play the accordion.” And he was serious. He said, “You can always make a living with an accordion.”

Because I ignored his advice, I never found out if he was right. Instead, I’ve lived 80 creative years pursuing acting and photography, and working as a director and poet.

If I had listened to my father, and hadn’t done any of those things, chances are you wouldn’t have recognized my name and you wouldn’t be reading this. Now that you are, I’d like to ask you to consider what I have to say. I reach out to you as someone who is troubled to see the conflict between Israelis and Palestinians continue apparently without an end in sight.

In fact, there is an end in sight. It’s known as the two-state solution–a secure, democratic Israel as the Jewish State alongside an independent Palestinian state. Even Israel’s nationalist Prime Minister Binyamin Netanyahu, has come to see this as the shape of the future. The problem is how to reach that end point. It’s something we should be concerned about–not only as world citizens, but as Americans.

You might recall the episode in the original Star Trek series called, “Let That Be Your Last Battlefield.” Two men, half black, half white, are the last survivors of their peoples who have been at war with each other for thousands of years, yet the Enterprise crew could find no differences separating these two raging men.

But the antagonists were keenly aware of their differences–one man was white on the right side, the other was black on the right side. And they were prepared to battle to the death to defend the memory of their people who died from the atrocities committed by the other.

The story was a myth, of course, and by invoking it I don’t mean to belittle the very real issues that divide Israelis and Palestinians. What I do mean to suggest is that the time for recriminations is over. Assigning blame over all other priorities is self-defeating. Myth can be a snare. The two sides need our help to evade the snare and search for a way to compromise.

This is the message that Americans for Peace Now seeks to spread. I’m a strong supporter of APN and the work it does. It is a leading voice for Americans who support Israel and know that a negotiated peace will ensure Israel’s security, prosperity and continued viability as a Jewish and democratic state.

The Middle East is only getting more tumultuous. The upheavals throughout the region show that what happens in the Middle East can’t help but affect us in the United States. This year, we’ve seen oil prices rise sharply and America become involved militarily in Libya. The cost to American lives and our economy continues to rise at a time when unemployment and deficits are sapping our country’s strength.

“If we can solve the Israeli-Palestinian conflict, then that will make it easier for Arab states and the Gulf states to support us when it comes to issues like Iraq and Afghanistan. It will also weaken Iran, which has been using Hamas and Hezbollah as a way to stir up mischief in the region.”

Those are the words of candidate Barack Obama in 2008. And although they’re just as accurate today, time has not stood still.

We’ve also seen a marked increase in violence: a Jewish family was murdered in the West Bank and a woman is killed in a bus bombing in Jerusalem. A rocket attack on southern Israel from the Hamas-controlled Gaza Strip resulted in a school bus being hit and a teen died of his wounds. Israel, in turn, has retaliated. We need strong American leadership now to pivot from the zero-sum mentality of violence to an attitude that focuses on the parties shared interests: security and prosperity.

If you’ve learned something from this letter, I’ve succeeded in my preliminary task. Now I ask for your support to continue APN’s educational efforts in this country–to spread the message that there is a peace solution, and to let Congress and the White House know it’s preferable for America to be part of the solution than to be drawn into another conflict.

There is a sizable number of influential voices in Israel saying the same thing. In April, a group of 50 prominent Israelis, including the former heads of the Mossad (Israel’s CIA), the Shin Bet (its FBI), and the military, issued a call for two states for two nations. Their plan includes a Palestinian state alongside Israel with agreed-upon land swaps. The Palestinian-populated areas of Jerusalem would become the capital of Palestine; the Jewish-populated areas the capital of Israel.

These experts are not naïve. They know that even if the Palestinian pragmatists of Fatah reconcile with Hamas, there will be extremists who will try to sabotage any future peace deal. They know how to deal with violent extremists. These people were entrusted with Israel’s security and are saying that the work they did alone isn’t enough to bring Israel security. We cannot know yet what this unification of Hamas with Fatah means and we have to wait and see what emerges. Regardless, the principle of establishing two independent states, one Jewish and the other Palestinian, is still critical in this region for both Israel and the Palestinian people. That is the goal, to support the rational and moderate course.

Their action plan echoes the 348 senior Israeli reserve army officers and combat soldiers who came together in 1978 to urge their government to sign a peace treaty with Egypt. They formed Shalom Achshav, Israel’s Peace Now movement which APN provides nearly 50 percent of their funding.

Peace Now’s activities and programs–such as Settlement Watch, the ongoing monitoring of settlement construction on the West Bank–keep peace on the world’s agenda. Peace Now gathers and publishes detailed information on settlements and is widely cited in Israeli and international media as the foremost authority on settlements. Peace Now is likewise well known for mobilizing demonstrations and organizing grassroots pro-peace activities. Innovations include an interactive online map of the settlements, “Facts on the Ground,” also available as an app for iPhone and iPad developed by APN applying Peace Now’s courageous work.

Like those Israelis who issued the peace plan, the members of Peace Now have their boots on the ground. They serve in Israel’s military reserves and see every day what life is like without a negotiated peace with the Palestinians.

That’s why I’m a supporter of APN and Peace Now.

I hope you’ll join me, and lend your voice to the influential and credible peace lobby that exists here as well as in Israel. Please give the tax-deductible contribution you can afford.

Dare I say it? It’s the logical thing to do.

One Response to ‘Live Long and Prosper’: My Message to Region