Libya and Stalemate: What a Complete Mess 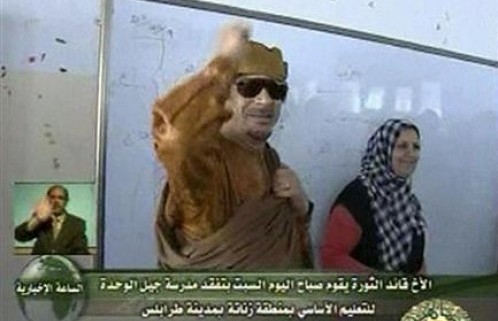 I have refrained from commenting on Libya for about 3 weeks now while attempting to make heads or tails of the situation and figure out what the heck is going on over there.

On March 21 I said: It is up to the rebels to prove they’re not a rabble.  Or worse.

In the ensuing period I haven’t seen anything to prove to me that they are an effective fighting force that can force its way to the gates of Tripoli where Gaddafi is hunkered down.  Not that he’s exactly cowering in his bunker.  Yesterday he paid a visit to a school in Tripoli and seemed to greatly enjoy the enthusiastic reception he got from the kids.

By now the rebels have had every opportunity to rattle Gaddafi’s Bab al- Aziziyya barracks.  Instead I’ve been watching with great bemusement this cat and mouse game racing up and down the desert highway.  I’m not privy to any military briefings but I’m pretty sure that those responsible for providing aerial cover to the rebels, the coalition commanders and their political bosses,  are now at their wits end with the amateurish and incompetent way the rebels have conducted their military campaign.  I’ve lost track of how many times Ajdabya has changed hands now.  Yesterday evening I watched a live broadcast on Saif Gaddafi’s al-Libiyyah channel from the western entrance of Ajdabya, those same green arches where the rebels have been filmed countless times.  Only yesterday it was Gaddafi’s fighters raising the green flag over the arches!  A few minutes later I tuned into al-Jazeera and heard a harried correspondent tell viewers that the rebels were beating a hasty retreat down the desert highway after coming under missile attack.

The mystery to me is what happened to the various units of the Libyan armed forces that defected at the beginning of this uprising.  I recall seeing several officers say they were joining, with their units, the 17 February revolution.  And then…  Silence.

I still contend that this is not a civil war.  What it is now is a mess, an armed insurrection that has gone flat.  Gone are the peaceful popular marches and protests and in their place we now have a ragtag rebel army in Toyota and Nissan pick-up trucks and small sedans doing military duty.  And they are not fighting the bulk of Gaddafi’s forces which I’m sure are still encircling Tripoli in a ring of fire and steel and haven’t budged.  Hence the US pronouncement last week that Gaddafi’s military capabilities haven’t been significantly diminished.

So the beleaguered, raging, venom spewing Muammar al-Gaddafi of the now famous (or infamous) Zanga Zanga speech has been transformed into a more confident, smiling leader paying school kids a surprise visit and now receiving African heads of state on a peace making mission.

On March 5 I pronounced that Gaddafi was “for all intents and purposes finished”.

I did not count on a popular protest movement being supplanted by an ineffective armed rebellion.  In other words, I was wrong.

Wrong in the sense that this man who’d become a pariah all over again has been handed a (temporary) get-out-of-jail card by an opposition that forgot that this was about the people and turned the showdown into a bloody vendetta between 2 sides that have infinite resources but very limited abilities on the battlefield.

And somewhere in Tripoli sits Saif Gaddafi, that highly-intelligent person who I’m certain plucked his father from the clutches of the Zanga Zanga madness and helped deliver him to the advantageous bargaining position he finds himself in now.

One Response to Libya and Stalemate: What a Complete Mess