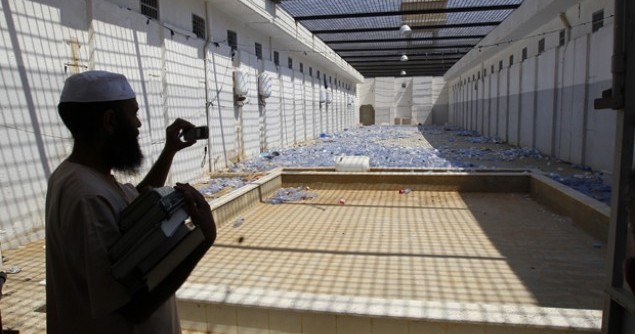 President Bush and his CIA director Michael Hayden have each claimed that the US has in the past only used the controversial interrogation technique of waterboarding on three prisoners.

This number, however, is being called into question by a Libyan dissident who has contradicted these claims with a detailed description of being waterboarded by US interrogators in a CIA ‘black site’ in Afghanistan.

Mohammed Shoroeiya told Human Rights Watch he was waterboarded numerous times during CIA interrogation in Afghanistan. He said he was strapped to a wooden board, ‘then they start with the water pouring… They start to pour water to the point where you feel like you are suffocating… they wouldn’t stop until they got some kind of answer from me.’

And there were more.  Another Libyan has described being subjected to ‘a water suffocation practice similar to waterboarding’ at the hands of the CIA in Afghanistan.

These men are among 14 former Libyan dissidents interviewed by Human Rights Watch for a report, Delivered into Enemy Hands, outlining how the US and UK secret services arrested dissidents across the world and returned them to Libya, straight into the hands of Colonel Gaddafi. Many were mistreated both before and after their return to Libya.

One detainee, Ibn al-Sheikh al-Libi, released information under CIA interrogation that was used to justify the invasion of Iraq. He was later rendered to Libya, where he died in prison in 2009.

Five of the men were transferred to CIA black sites in Afghanistan for up to two years, where they report being held in windowless cells, beaten, chained in stress positions, deprived of food and kept awake for lengthy periods by rock music played at ear-splitting volumes. They were never charged with any crimes, and were eventually rendered to Libya. One of the men reports also being held at a CIA black site in Morocco.

The dissidents’ accounts are supported by documents uncovered by Human Rights Watch in the offices of Gaddafi’s intelligence chief, Musa Kusa, during the fall of Tripoli last September, including faxes from the CIA and MI6 alerting the Libyans to particular arrests.

Ten of the fourteen cases took place within a year of the US and UK’s public reconciliation with Gaddafi. The renditions to Libya took place despite the regime’s reputation for torture and detention without trial. The documents show that in at least two cases the US sought diplomatic assurances that prisoners would not be tortured – but these were unenforceable, and were roundly ignored.

Two cases involved the UK security services working with the CIA to render dissidents to Libya: both were extensively reported when the documents were discovered last year. The two men who were rendered to Libya, Abdul Hakim Belhadj and Sami Mostafa al-Saadi, are now suing the British government.

Most of the men interviewed for the report were members of the Libyan Islamist Fighting Group (LIFG), an Islamist group formed in opposition to Gaddafi’s controversial and oppressive interpretations of Islam. Almost all had fled the country in the late 1980s and went to Afghanistan to fight the Soviets while also gaining training for their own struggle.

Related story: Was Gaddafi ‘cyber-spying’ on opponents in the UK?

But as Human Rights Watch points out, after the September 11 attacks the US was ill-disposed to distinguish between Islamic militants waging war against the West and those fighting other causes. Many of the dissidents scattered, and were later arrested in countries including Hong Kong, Malaysia and Mali.

Like many other captives at the height of the ‘war on terror’, they were shuttled between countries across Asia and the Middle East and to Guantanamo Bay, often remaining in US custody for years.

Although parts of the report are familiar, the catalogue of cases detailed in the Human Rights Watch investigation provides a very detailed challenge to the US’s previous admissions about its use of torture and offers another piece in the murky puzzle of US-led international diplomacy following September 11.

One Response to Libya: The CIA’s Waterboarding Hot-Spot