Libya & NATO: “To the Victor the Spoils”? 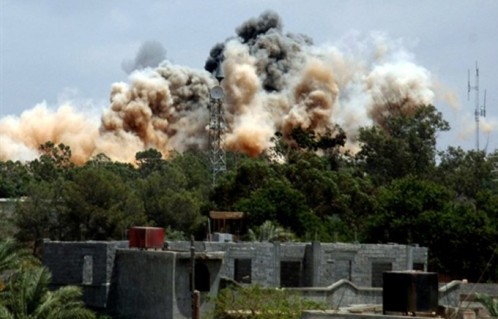 At a press conference in Tripoli on Aug. 26, a statement read aloud by top Libyan rebel commander Abdel Hakim Belhadj was reassuring. Just a few months ago, disorganized and leaderless rebel fighters seemed to have little chance at ousting Libyan dictator Moammar Ghaddafi and his unruly sons.

But despite vague references to “pockets of resistance” throughout Tripoli, and stiffer battles elsewhere, Libya’s National Transitional Council (NTC) is moving forward to extend its rule as the caretaker of Libyan affairs. In his conference, Belhadj declared full control over Tripoli, and the unification of all rebel fighter groups under the command of the military council.

Listening to upbeat statements by rebel military commanders, and optimistic assessments of NTC members, one gets the impression that the future of Libya is being entirely formulated by the new Libyan leadership. Arab media, led by Al Jazeera, seemed at times to entirely neglect that there was a third and most powerful party involved in the battle between freedom-seeking Libyans and the obstinate dictator. It is the North Atlantic Treaty Organization, whose decisive and financially costly military intervention was not charitable, nor was it a moral act.

It was a politically and strategically calculated endeavor, with multifaceted objectives that simply cannot be scrutinized in one article.

However, one needs to follow the intense discussion under way in Western media to realize the nature of NATO’s true intentions, their expectations and the bleak possibilities awaiting Libya if the new leadership doesn’t quickly remove itself from this dangerous NATO alliance.

While Libyans fought against brutality, guided by a once distant hope of freedom, democracy and liberation from the grip of a clownish and delusional dictator, NATO calculations had nothing but a self-serving agenda in mind.

In his brilliant and newly released book, “Postmodern Imperialism: Geopolitics and the Great Game,” Eric Walberg astutely charts NATO’s role following the end of the Cold War. NATO “has become the centerpiece of the (U.S.) empire’s military presence around the world, moving quickly to respond to U.S. needs to intervene where the U.N. won’t as in Yugoslavia, Afghanistan, Iraq and now Libya.”

The massive NATO expansion in the last two decades, to include new members, to enter into new “Partnerships for Peace,” and to carry out various “Dialogue” with entities outside its immediate geographic sphere required the constant reinvention of NATO and the redefinition of its role around the globe. “NATO’s victory” in Libya — a “regime change from the air” as described by some — is certain to ignite the imagination of the relatively dormant neoconservative ideas of regime change at any cost.

Indeed, it might not be long before NATO’s intervention in Libya becomes a political-military doctrine in its own right. U.S. President Barack Obama, and other Western leaders are already offering clues regarding the nature of that doctrine. In a statement issued Aug. 22 from Martha’s Vineyard, where Obama was vacationing, the U.S. president said: “NATO has once more proven that it is the most capable alliance in the world and that its strength comes from both its firepower and the power of our democratic ideals.” It’s difficult to underline with any certainty how this gung-ho mentality coupled with democracy rhetoric is any different from President George W. Bush’s justification of the U.S. invasion of Afghanistan and Iraq.

Many commentators in the U.S. and other NATO countries are already treating Libya as another military conquest, similar to that of Afghanistan and Iraq, a claim that Libyans would find most objectionable. Such ideas are not forged haphazardly, however, since the language used by NATO leaders and their treatment of post-Ghaddafi Libya seem largely consistent with their attitude toward other invaded Muslim countries.

In a written statement cited widely in the media, U.S. Secretary of State Hillary Clinton began laying down the rules, by which the “new Libya” will be judged before the international community (meaning the U.S., NATO and their allies.)

“We will look to them to ensure that Libya fulfills its treaty responsibilities, that it ensures that its weapons stockpiles do not threaten its neighbors or fall into the wrong hands, and that it takes a firm stand against violent extremism.”

Worse, the al-Qaida card had already been placed into NATO’s new game. The centrality of that card will be determined based on the political attitude of the new Libyan leadership.

The insinuation of al-Qaida’s involvement in the Libyan uprising is not new, of course; it dates back to March when “top NATO commander and U.S. Adm. James Stavridis said he had seen ‘flickers’ of an al-Qaida presence among the rebels,” reported the British Telegraph (Aug. 26).

Now, Algeria, a U.S.-ally in the so-called war on terror is waving that very card to justify its refusal to recognize the NTC.

Injection of “fighting extremism” as a condition for further U.S. and NATO support, and the refusal of access to tens of billions of dollars in Western bank accounts, could prove the biggest challenge to the new Libyan leadership, one that is greater than Ghaddafi’s audio rants or any other.

NATO understands well that a “failure” in its new Libya project could spoil a whole array of interests in the Arab region, and could hinder future use of Obama’s blend of firepower and democracy ideals. Mainstream intellectuals are busy drawing parallels between Libya and other NATO adventures.

John F. Burns, writing in the New York Times (Aug. 22), discussed some of the seemingly eerie similarities between post-Ghaddafi Libya and post-Saddam Iraq. In an article titled: “Parallels Between Qaddafi and Hussein Raise Anxiety for Western Leaders,” Burns wrote: “The list (of parallels between both experiences) sounded like a rule book built on the mistakes critics have identified as central to the American experience in Iraq.” Burn’s line of logic is consistent with a whole new media discourse that is building momentum by the day.

Tuning back to Arabic media however, one is confronted with almost an entirely different discourse, one that refers to NATO as “friends,” to whom the Libyan people are “grateful” and “indebted.” Some pan-Arab TV channels have been more instrumental than others in introducing that faulty line of logic, which could ultimately bode terrible consequences for Syria, and eventually turn the Arab Spring into an infinite winter.

The Libya that inspired the world is capable of overcoming NATO’s stratagems, if it becomes aware of NATO’s true intentions in Libya and the desperate attempt to thwart or hijack Arab revolts.