‘Let’s Talk About Talking. And Just Keep on Building’ 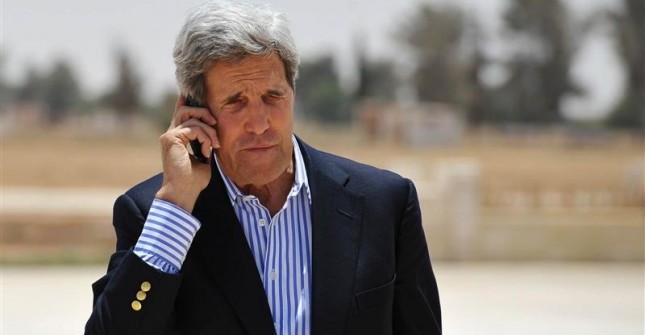 Was I wrong yesterday when I claimed that John Kerry’s peace process mission was a failure?  Just he because Kerry wrangled a last minute agreement from Israel and the Palestinians to come to Washington to talk about talking – over six months no less – doesn’t place the peace process in Kerry’s win column.  It also doesn’t forfeit my claim that both Kerry and President Obama have become the latest of America’s lame ducks in the Middle East.

Why did Israel agree to talks?  Some believe that the drumbeat commentary of the coming end of the Two State option forced Israel’s hand.  Others think that the new European Union guidelines separating Israel and its occupation, the BDS movement and the growing international sense that Israel had gone too far was the catalyst.  In other words, Israel had to do something.  Why not look ready for peace and at the same time exhaust yet another American administration by agreeing to talk – about talking.

Beside the Middle East is in turmoil.  By agreeing to talk – about talking – the spotlight on Israel is diverted.  Over the next year, Syria and Egypt will be the focal point.  Better to be perceived as cooperative rather than intransigent.

Why did the Palestinians agree to talks?  With the region in turmoil, attention has been diverted from Palestinians, too.  Syria has replaced Palestine as the center of regional squabbling and the devolution of Egypt’s political and economic life is foreboding.  Gulf money is flowing everywhere but Palestine. The region’s militaries and oligarchs want Israel in on their security guarantees.

Palestinians are increasingly isolated.  They exist as negative symbolic markers without power.  The instability Palestinians caused in the past paid dividends for Middle East powerbrokers. Palestinian usefulness is at an ebb.  For some rulers in the region this is a time where Palestinians and dissenters in general can be disciplined once and for all.

The landswaps deal that the Arab League signed onto said it all.  For those in power in the Middle East, the Palestinian issue has been resolved in favor of Israel.

So it seems that the Palestinian agreement to talk had little to do with Israel as a partner for peace.  While this may sound preposterous at first, think what Palestinians might get from Israel for talking – about talking.

A real Palestinian state, with the settlements dismantled, the freedom to control their own internal affairs and borders, with their own military and ability to conduct a foreign policy?  No one on the Palestinian side believes that any of these possibilities are seriously on the table.

In the announcement of the Washington meetings, Kerry stressed once again the economic incentives that would flow to Palestine – a theme he has harped on since his first trip to the region as Secretary of State.  Remember Kerry’s four-billion- dollar plan to transform the Palestinian economy?  Now he’s talking about reducing unemployment in the West Bank.  To stress economic benefits when everyone one knows the plight of the Palestinians is about occupation rather than economics means that Palestinians are looking toward the United States rather than Israel.

All of this raises a serious question.  What is the agreement to talk – about talking – really about?

One Response to ‘Let’s Talk About Talking. And Just Keep on Building’