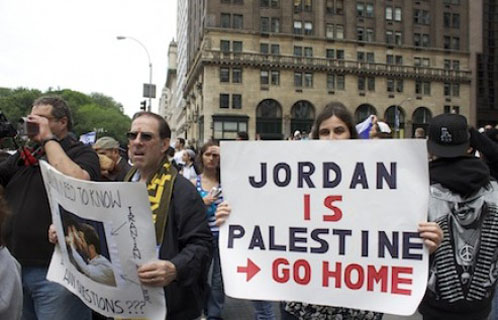 It’s interesting to note Jordan’s stance towards the Palestine Papers. One government official seems to define it as “premature”, or generally speaking, too soon to tell. At this point that’s probably an accurate assessment. Jordan is probably holding its breath (just barely) over what those papers will reveal about its role.

Not only is this a conflict the Kingdom plays an obvious part in, but Al Jazeera is unlikely to be kind to whatever Jordanian mentions there may be, and both facts spell trouble for Jordan. Like the wikileaks, they are unlikely to reveal anything Jordanians don’t already assume, hence such documents only serve to reaffirm perceptions rather than confound them. So far, revelations seem to have centered largely on perceptions throughout the negotiations of the infamous “Jordan option”. It seems the state’s fears regarding this subject, especially in the past year or so, are not as unrealistic as one might assume. Here are a few gems:

Rather than break early for lunch, on other occasions, negotiators tried to resolve disagreements by offering in earnest what, to some, might sound like outlandish suggestions. Former U.S. Secretary of State Condoleezza Rice was the source of one such proposal during a meeting on July 30, 2008 at the State Department. Rice kicked off the session by asking for a progress report on the points of agreement between the parties. After a quick update from Qurei and Israeli foreign minister Tzipi Livni, the latter said that some major decisions had not been reached as far as how a future state of Palestine would look. “We need to know how it is going to work,” she said, “The Airport and Seaport.”

Addressing the Palestinians, Rice then dropped this bombshell: “[Y]our airspace is so small – put it in Jordan.” The Palestinian negotiators appeared shocked at the suggestion that they use a sovereign country’s airspace as their own. Just under Rice’s comment, the Palestinian note taker wrote in brackets: “Discussion on whether this is a joke or a real option. Tzipi Livni and Condoleezza Rice clearly think it is realistic as an option.”

…A few months earlier, on February 11, it was Livni who was in a joking mood. During an otherwise serious meeting about regional security, the subject of Jordan came up in a discussion about whether a future Palestinian state would be de-militarized. “What do you want from Jordan?” Qurei asked the Israelis. “A Palestinian state,” Livni responded. “This is a joke. I didn’t mean that.