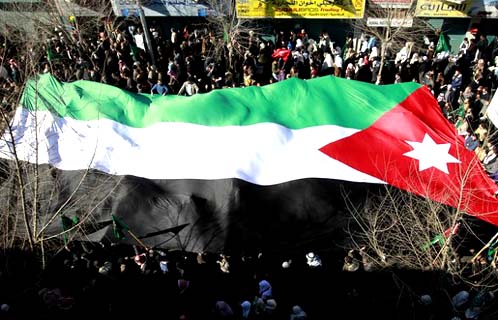 In the past few weeks we’ve seen protesters in Jordan of all sorts and kinds converging on the streets of the country, specifically Amman, every Friday.

There is a growing “oppositional” voice in the country for sure, and their calls are diverse and assorted. Aside from these protests, many are enthused when it comes to the public discourse of recent times, and the usual sentence that seems to be starting off many a conversation these days goes something like: “so what do you think is going to happen here?”

The question is always about what comes next? Will things calm down or will the so-called “opposition” grow in numbers and volume? The “opposition” is no longer clear to me as it was a while back. It is no longer made up of just the Islamists or just the leftists. It has evolved to include anyone and everyone with a critical voice, and that has become a significant constituency of citizens. Thus it is utterly difficult for me to even label this constituency as mere “opposition”.

But in this evolution we seem to have hit a road bump. Assumptions have been made that anyone who is critical of the status quo is to be considered disloyal and this assumption has been solidified by another emerging group, predominantly tribal (according to their street banners), who are offering nothing but declarations of support and loyalty for the King.

The emergence of this group has created a diverging road where the population is slowly being split down the middle between those who declare their loyalty to the King and those who are critical of the country’s situation and are therefore, by nature of the first group’s existence, considered disloyal.

How has this manifested on the ground? Many of us have already seen it. From pro-King demonstrations or rallies, to banners hanging in the public sphere declaring allegiances, and, even worse, events celebrating the King’s birthday over a month since it has past. Talk about a belated birthday, eh? The existence of the loyalty group is, to me, much more concerning and threatening to the state than those who own a critical voice. The latter is, for the most part, concerned with improving the country one way or another, maybe not the way others would like to see, and maybe not the way the upper echelons of power would like to see, but still, this is their underlying goal. However, the former, these so-called loyalists seem to be bent on doing nothing but creating disturbing contrasts.

With that, there are a few things to note:

1) It goes without saying, but those who are raising critical voices are NOT and should NOT be considered as being disloyal to the country. To me, this is a call by one group of people to silence another, to have them fear for their sense of citizenship, to cast them out as being not of this country because they are labeled as disloyal to it. Any group that seeks to impose such a contrast on the entire country should be spoken out against by the people, by the government and by the country’s leadership.

2) These so-called public demonstrations of loyalty are disturbing. They are growing numerous and unabated, but more importantly they are enforced on the public sphere. As far as I know, it is illegal to put up the King’s photo without official permissions, which leads me to believe that all of these banners, posters, and even the personal cars that are now putting up the King’s photo with declarations of loyalty from a specific tribe, are all breaking laws, or, are being permitted by the state. Either people are getting permission to hang up these photos, or the fact that they are breaking a law is being overlooked.

This group of “loyalists” is made up of either two sub-components: one that is perhaps genuinely loyal to the monarchy and has traditionally considered its own identity to be subject and/or intertwined with that sense of loyalty, and one that is making public displays of what I consider to be “fake” loyalty, in an effort to curry favor or brown-nose.

Now, to what extent the state has realized that this evolution will have disastrous consequences on a population that is still struggling to deal with the national identity question, and the extent to which this evolution (which I dare say is really a devolution) will create massive polarization that one might even compare it to what unfolded in the late 1960’s and early 70’s – a dark age of civil discontent in the Kingdom – is beyond me.

We seem to all be busy ignoring this emergence and quietly “accepting” it as normally as we once accepted photos of King Abdullah hoisting a sniper gun plastered on the back windows of cars – another disturbing act but one of no real political consequences unlike what we are facing today, with the regional context in mind. But while we ignore this phenomenon, it is growing rapidly in my eyes, and without being properly countered it will look to polarize the social landscape like never before. It will set one group of people against another, it will tear at the seams of an already fragile social fabric, and it will have a much longer lasting impact than anything else happening on the ground today.